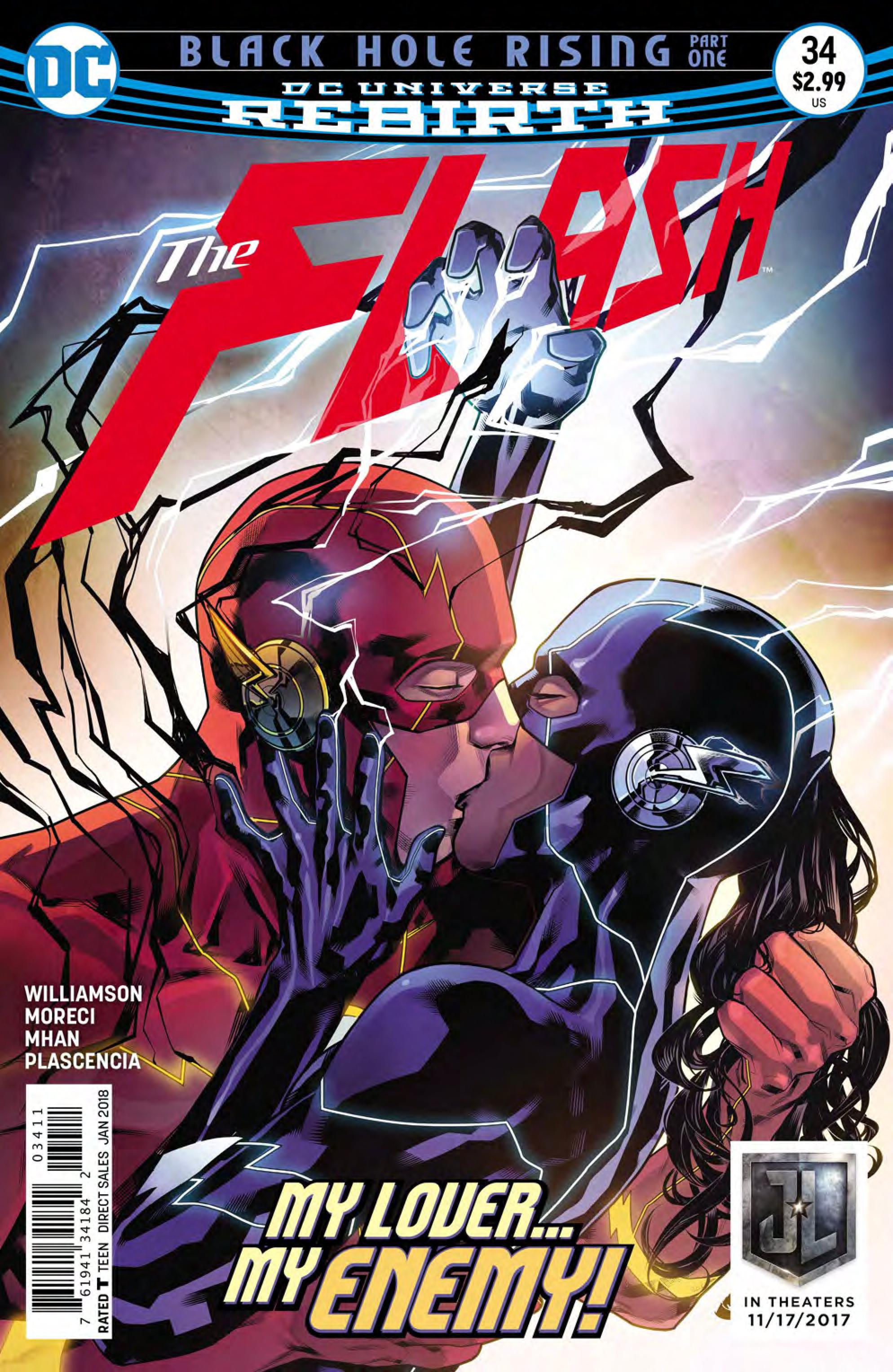 The Flash #34 serves a double purpose, as it’s both the first part in the “Black Hole Rising” two-issue arc and part of the final act of the “Negative Speedforce” arc. The issue marks the return of Meena after her death all the way back in The Flash #9, and a change in a plot device in the book that I have felt has held the book back in the past. The art by Pop Mhan is great and has a brilliant set of colors to match.

“Black Hole Rising” part one! When a shocking reunion leads to an even more dire discovery about The Flash’s new powers, Barry and Wally will have to confront their rocky past if they both hope to get out alive!

“Black Hole Rising” brings back Williamson’s background shadow organization he set up long ago as well as Meena, a character that was introduced in the first arc. The issue also brings to a head the issue with the Negative Speedforce in that it reveals that it’s killing Barry slowly due to him having both positive and negative energy contained within him. The story primarily focuses on Barry and Meena’s past relationship and the guilt he feels over her dying, with a couple of pages of Barry training with the Negative Speedforce and falling under its influence again. Thankfully this issue finally removes it from Barry, freeing him up from having to deal with the Venom symbiote-esque storyline that wasn’t going all that well. While the return of Meena was nothing unexpected, the removal of the Negative Speedforce from Barry and the method employed was (the actual way it’s taken away isn’t really that clear, some Black Hole tech I guess?). But overall the interactions between Barry, Wally and Meena were nice to see.

There’s a small two page interlude within the story that is hinting at the next arc revolving around a gang war in Central City as told by detectives still in the CCPD to the still-angry Kristen who is lamenting the fact she’s still stuck working in Iron Heights with Barry and Warden Wolfe. It’s a nice tease of the future, but it feels slightly out of place in the middle of the comic. And it wouldn’t have changed anything if it wasn’t present.

The art by Pop Mhan is really great to look at — the way he draws the female characters in particular looks really nice. The best two are definitely Meena and Kristen, who both look incredible.

The Flash #34
Is it good?
A good issue that removes some long overdue problems with the book, and in doing so, returns earlier plots to the forefront.
The removal of the Negative Speedforce from Barry was long overdue.
The interactions between Wally, Meena and Barry were really sweet.
Pop Mhans art was spectacular.
There was no real explanation of how Meena removes the negative speedforce from Barry.
The Kristen pages, while nice, could have been removed and none of the plot would have changed.
8.5
Great
Buy Now
Comixology/Amazon