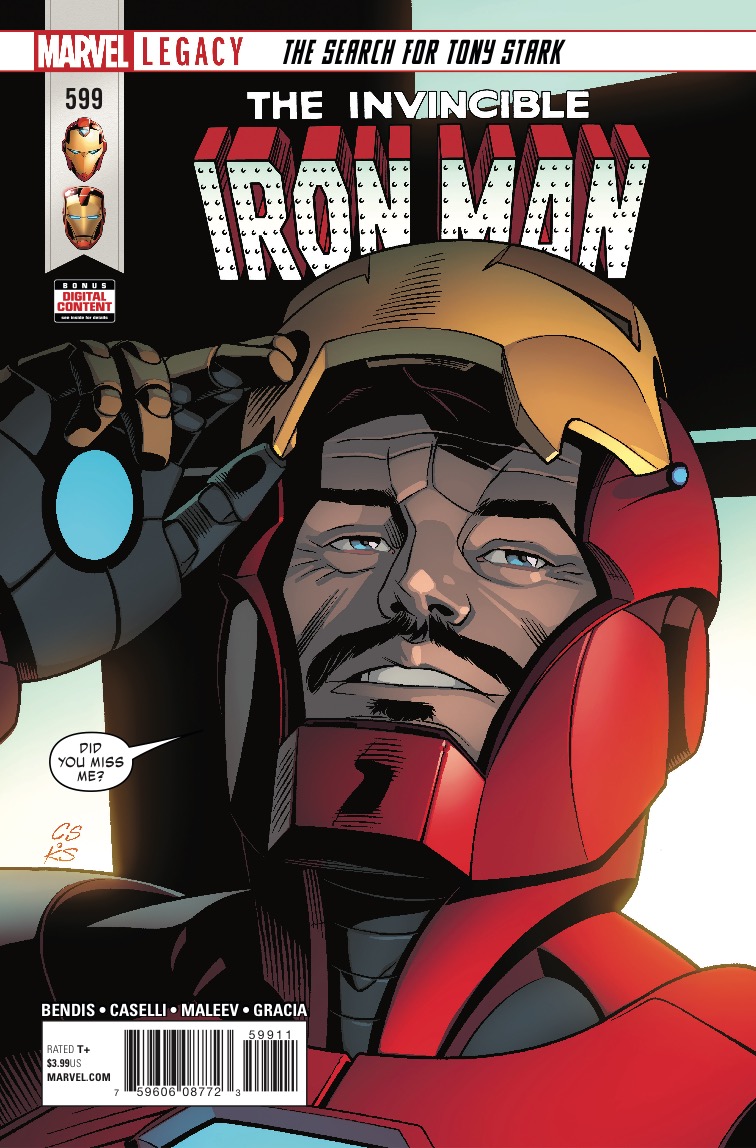 I’ve been greatly anticipating Brian Michael Bendis’ final issues of Invincible Iron Man because he aims to wrap up some big time story beats. The biggest is who his real parents are, which gets a major revelation this week. We also learn of a potential beginning to a future S.H.I.E.L.D. which could change everything.

Aside from the big revelations, this story unveils we also have the excellent art of Stefano Caselli and Alex Maleev, the further progression of Dr. Doom as Iron Man storyline, and the further adventures of MJ. There’s a lot in this one.

Interesting way of putting it.

It’s quite clear Bendis is ending his time at Marvel focusing in on the family. It’s evident on the very first page of this issue, which has Dr. Doom discussing the future child inside the woman he loves. We then cut to Tony’s mother worrying about her poor son and MJ doing whatever she can to keep his company alive. Truly though, this issue is all about Tony and his mother finally talking. It has been teased for so long Tony would be found and it’s a breath of fresh air to finally see it here.

The scenes with Tony and his mother are going to be the ones talked about by the water cooler this week. In them we gather how much his mom loves him, but also the tepid fear he holds concerning who his father really was. Tony is a man of science, Bendis points out, and will run every equation to gather more intel on who he is based on who his father was. This builds nicely to a cliffhanger that you won’t see coming, but will most assuredly offer a resolution in the next issue.

This issue also checks in on Riri — a brief scene to be sure, but it will send sparks when it comes to where we go from here. Riri has been an interesting character from the start, but if Marvel is teasing what I think they are here she could be as important as Nick Fury going forward.

The art team doesn’t get to draw much action, but the interior suit shots by Caselli continue to look amazing and technical, and the character acting is on point. Maleev’s style works well as he deals with all the villain scenes giving them a bit of grit. The big cliffhanger reveals a character that I’d swear was Kurt Russell, but I’ll leave hawkeyed readers to decide.

Tony, get back here, people miss you!

Like with many of Bendis’ scripts there are pages that read like filler. They add character color, but they also can be frustrating as you’ll want more plot progression than quirky dialogue. Two pages between Tony and his mom are like this, and there’s an errant page or two elsewhere that could have been paced a bit better.

This issue is huge and should have everyone talking. Bendis has seriously shaken up Iron Man in ways that will forever change Tony Stark.

Invincible Iron Man #599
Is it good?
An exciting penultimate issue that will make reading #600 a must.
There's more than one whopper that'll have you on the edge of your seat
The family themes are strong with this one
A sharp looking book
Pacing issues here and there though they do show character color
9
Great
Buy Now
Comixology/Amazon

‘Invincible Iron Man’ #599 spoilers: Tony Stark is about to have a family reunion