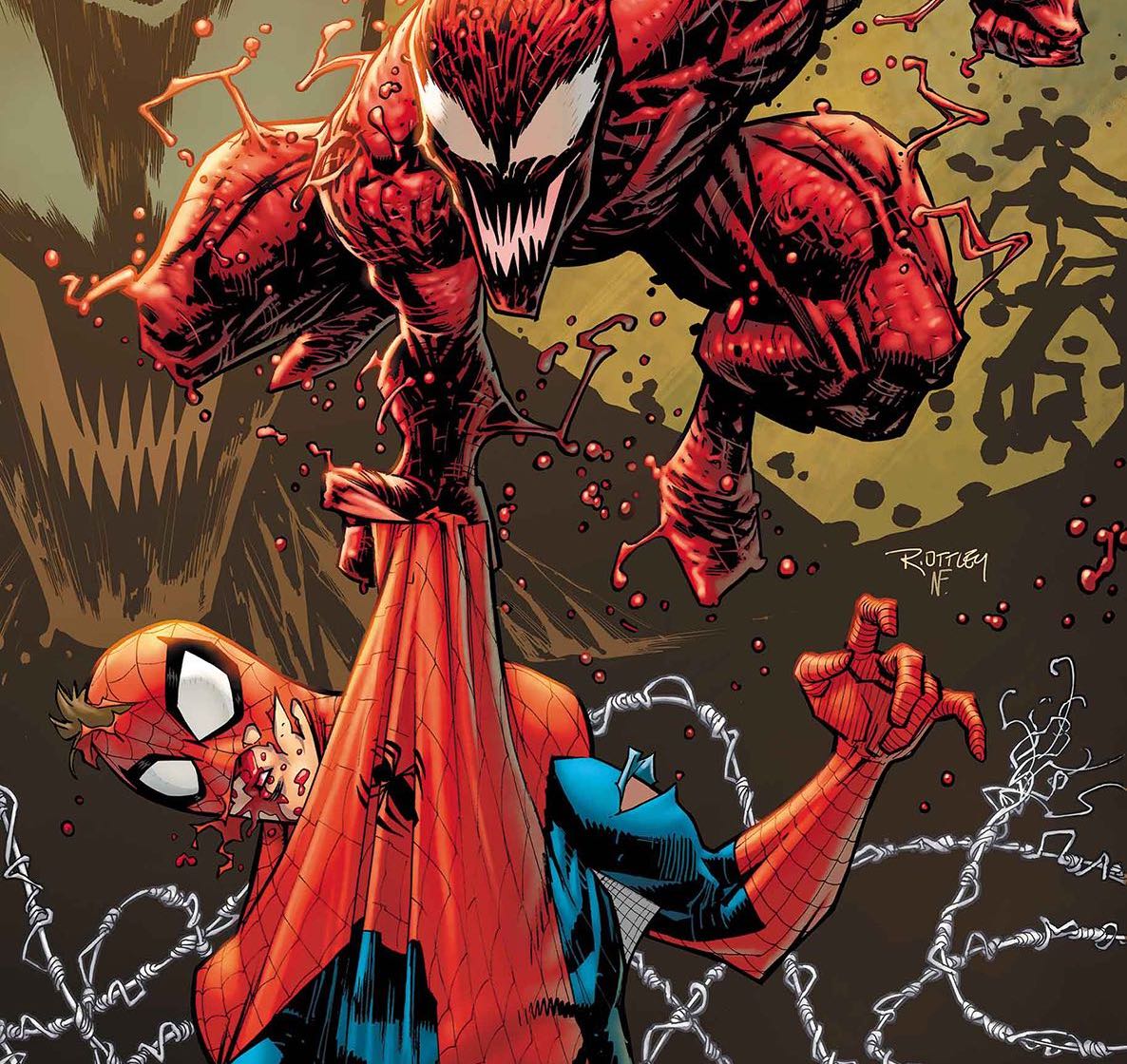 It’s the moment we’ve all been waiting for this week when Amazing Spider-Man gets drawn into Absolute Carnage! It’s Spider-Man vs. Norman Osborn (who thinks he’s Carnage) in an epic confrontation. Can Ryan Ottley and Nick Spencer live up to our expectations? Definitely.

If you read solicitations this is the battle many will be looking forward to thanks to the ever important Norman vs. Peter showdown. This issue also ties into Kindred’s part in all of this with some new hints at who he might be.

Spencer and Ottley do a great job mixing flashback with present day antics in the Absolute Carnage event. As you can see in the preview Kindred had a little talk with a very loopy Norman Osborn two weeks prior to Norman being given a Symbiote and made to believe he is Carnage. These scenes cut in with Peter recapping the event for us and then diving into a battle with Norman as he attempts to save Venom’s son and Harry Osborn’s kid.

There are a few interesting points made in this issue that’ll make you think. The big one involves Norman and how he’s a bit of a message to the young and hopeful Peter Parker and his crew. There’s also an interesting point made about Gwen and the everlasting love Peter has for her. Kindred continues to be an enigma–frustratingly so–but he plays a good boogeyman in the issue.

Ottley does a great job with the material focusing our eye on the creepiness of Kindred and the ferocity of Norman with the Symbiote. There is an excellent page devoted to the origin of the Symbiote when Spider-Man fought in the Secret Wars and the recap of the Absolute Carnage event is efficiently done in one page too.

Colors by Nathan Fairbairn and inks by Cliff Rathburn capture the feel of the moments from a soft blue to a seemingly safe scene to a vomit green when Carnage and Spider-Man fight. The inking on Spider-Man is excellent capturing his ribs and muscle very well.

This issue suffers from what many tie-in comics fall prey to which is not doing a heck of a lot in the pages allotted. Two and a quarter pages are devoted to catching us up to speed on Venom’s Symbiote and the event which seems a bit unnecessary given we’re 3 issues deep into the event. I guess folks who read only this series require it, but it’s also a big Spidey villain story so those folks likely don’t need it! Still, Spencer makes a good argument for why Norman Osborn is Peter Parker’s arch-nemesis.

I dug this tie-in for its clean art and creepy boogeyman feel. This book serves as a reminder why Norman Osborn is Spider-Man’s most fearsome enemy.

Amazing Spider-Man #30
Is it good?
I dug this tie-in for its clean art and creepy boogeyman feel. This book serves as a reminder why Norman Osborn is Spider-Man's most fearsome enemy.
Strong visuals by the whole time
A strong case is made about Norman being Peter's ultimate nemesis
An interesting point about Norman
With the recap and the general plotting there isn't a lot to the book
8.5
Great
Buy Now
Comixology/Amazon