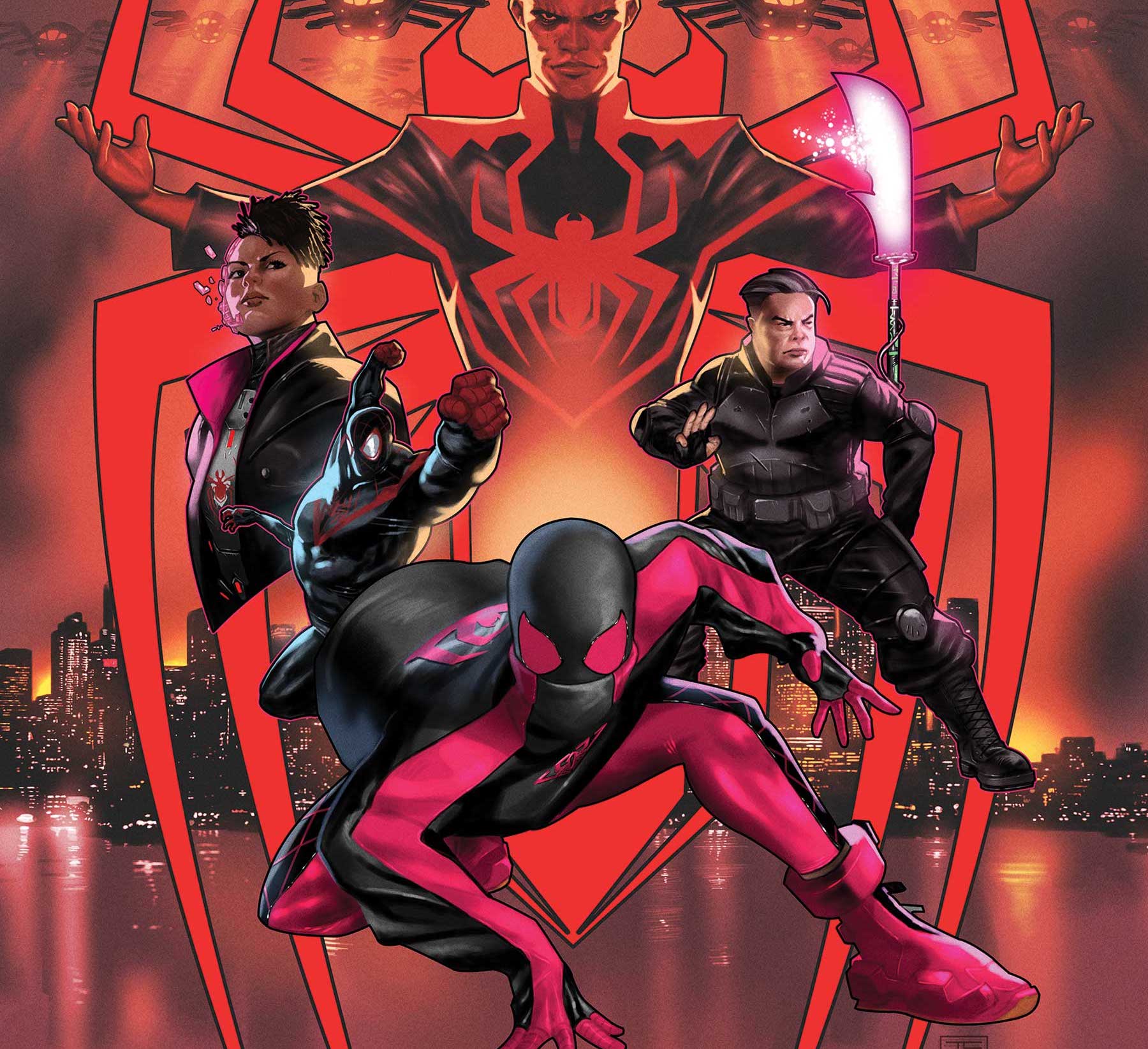 As of late, one Miles Morales has been on a multiverse adventure to gather some essential info. Namely, that his uncle Aaron is very much alive, and his evil clone Selim is still kicking, too. (And if that weren’t enough of a family affair, Miles has been joined by his shape-shifting brother, the aptly-named Shift.) Issue #38 officially kicks off the “Empire of the Spider” story arc, which sees the worst-case scenario come to life: what would happen if Selim defeated Miles instead of the other way around? Writer Saladin Ahmed aims to show us!

If you dig multiverse and What If… stories, you’ll enjoy this issue. The story proper kicks off with Miles and Shift already in a new universe, where Selim’s face is plastered across skyscrapers. Soon the two brothers discover an innocent, unarmed person being accosted by soldiers with spider logos on their masks, and they immediately swoop in to help. Soon after helping the assailant, a covert crew swoops in to take Miles and Shift in, and so begins an adventure in discovering just how much things are twisted in this other dimension.

The fun of the issue is seeing familiar faces, and how they prove different yet markedly the same after years of living in a fascist society. Miles’ sister is also among these older friends and familiar faces, which is a fun wrinkle as she’s still just a baby in Miles’ own timeline. This allows Ahmed to play with a brother/sister dynamic between the two with some intriguing results. Customary of interdimensional stories, there are twists and turns to be found, and one that’s especially essential to the store sees Selim, who was already formidable, as the supreme leader. That means it should be quite interesting to see how Miles can overcome even greater odds and how the dynamic between the two should continue to grow and extend.

Welcome to the resistance. Courtesy of Marvel Comics.

This issue is drawn by Christopher Allen and Alberto Foche, with colors by Brian Reber. The aging up of these key characters, including Ganke, is well done, and serves as the highlight as far as the issue’s core visuals. There’s also a big battle that’s well choreographed and has the feel of a final boss battle. The colors capture the light on costumes well, and help make Miles’ new costume look great at a time when his core identity is both being challenged and vital to his ability as a hero. The details in Ganke’s military garb are quite good, making you linger just a bit to take it all in. (Got to love those pouches!) Those garbs, alongside the futuristic cityscape, generally looks detailed and establishes this is a techno-futuristic landscape, which helps spin the larger narrative in some really effective ways.

The book generally has an even keel as far as colors and atmosphere, though. Those colors tend to feel flat and too similar between backgrounds and foreground characters — and there’s often very little distinction between them to enhance the large sense of depth. The opening scene, which is set at night, also looks as bright as day with little attention to making it seem very dark nor adding light sources to justify how everything is so well lit.

As far as the story, this issue sets up a rousing rebel versus the fascist state story, but it’s also not entirely breaking new ground. Ganke and Miles’ sister aside, this first issue in the arc is enough to hang its hat on, but you’ll be wishing for a bit more either from the main villain or some bigger revelations.

Overall, Miles Morales: Spider-Man #38 is a good start to another new multiverse story for Miles to resolve. Playing into Miles’ family and familiar faces, it’s a fun What If…-style story that should entertain longtime fans as well as mix it up enough for casual readers to want to see what happens next.

‘Miles Morales: Spider-Man’ #38 peers into a possible dark future for Miles
Miles Morales: Spider-Man #38
Overall Miles Morales: Spider-Man #38 is a good start to a new multiverse story for Miles to resolve. Playing into Miles' family and familiar faces, it's a fun What If... style story that should entertain longtime fans as well as mix it up enough for casual readers to want to see what happens next.
Reader Rating0 Votes
0
Sets up higher stakes than ever for Miles and Shift
Neat to see older versions of Miles' supporting cast in this alternate dimension
Offers up a "end boss" level villain to defeat
There's nothing too groundbreaking here as far as story with a limited look at the villain
Colors tend to treat background the same as foreground lacking a pop and emphasis on visuals
8
Good
Buy Now
Amazon