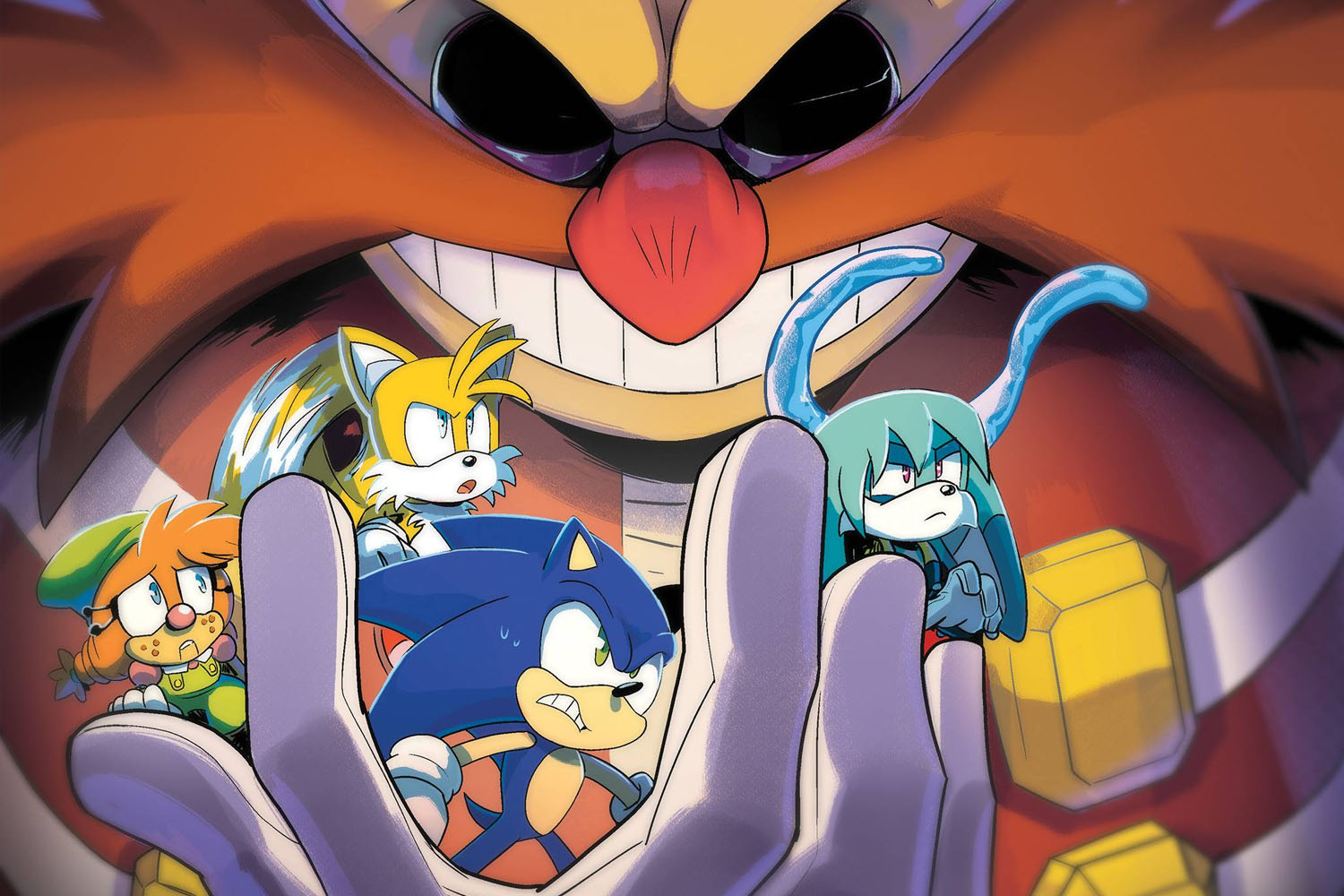 Back again with IDW’s Sonic The Hedgehog comic series! This issue is written and drawn by the returning Evan Stanley, picking back up from Ian Flynn once more. Last time I was here I covered the big 2022 Annual issue, which you should remember because it was a week ago, but we’re back to the main story now, so it’ll be a simple run-of-the-mill look through as per usual.

The plot of this issue is still dealing with the aftermath of #50, aka the whole Imposter Syndrome/Surge and Kit arc. While this didn’t definitively conclude that whole story, it did put things squarely into “winding down” territory, with Sonic and friends escaping and leaving a nice cliffhanger for Surge’s next move with Dr. Eggman. The issue does a good job getting us there, with some solid characterization and banter between everybody. I especially like how Sonic broke through Kit’s anxious hesitance and got him to go along with them – a great showcase of Sonic’s leadership skills and sterner (but still kindhearted) qualities.

There was a bit of minor development for Belle as well here, and it seems her current arc is leaning toward accepting that not all Eggman robots will want her help, but that’s only lightly teased via her interactions with Metal. As mentioned before, Kit gets an interesting moment or two, but Surge is the one who gets a decent chunk of the issue to herself to really shine. Seeing her crawling her way out of near-demise and earning herself a new power up (very Sonic Adventure, honestly. I love it) was pretty cool and a testament to her resilience as a character. I can’t wait to see what else she cooks up as a villain for our heroes (especially now that Starline is gone). There’s certainly a bit of a vacuum to fill with the book’s villains, and having ones that aren’t just Eggman over and over is honestly crucial to him not feeling stale as Sonic’s main bad guy.

Stanley’s art is as good as always, of course. The framing and panel layouts are strong, giving you a breezy but visually stimulating read all the way through. The coloring by Reggie Graham is quite good here too, and complements Stanley’s art really well here. It has a nice palette, and a slightly fuzzy grain to it that makes it feel like a VHS recording of a cartoon – a perfect aesthetic choice for an arc that feels a bit akin to the old SATAM cartoon in some respects. There were also some really intense and cool shots of Metal Sonic in this one, which I personally eat up every time, y’know, since robots being cool is the best, ever. More of that. I demand more cool robots (Yes, I AM eagerly awaiting Scrapnik Island, thanks for noticing).

I’m quite satisfied overall with this issue. I get the feeling we might still have a couple issues left in this arc though, which I am admittedly a little mixed on. I really feel we need to wrap things up and let some things sit for a bit and do some other stuff, but I also don’t dislike getting more Surge and Kit, and it’s all been very well written and cleverly paced regardless. I liked the character stuff in this one, the plot felt sufficient in getting this arc into its winding down phase, and there are some genuinely inspired artistic choices with the visuals. This one is definitely worth picking up, but you already knew I was gonna say that, didn’t you?

‘Supper Club’ is a feast of friendship