It’s a strange world in which we live. So it should come as no surprise that pro wrestlers, individuals to whom we look for a combination of supreme athleticism and heart-rousing theatrics are a very strange breed indeed. When not engaging in their mock battles, pro wrestlers perform in promotional interviews, or “promos” to add fuel to their upcoming matches or to bring further attention to themselves outside of their baby oil slathered torsos and spandex unitards. Some are greater than others. Some just exude greatness for reasons we can’t quite explain… oh yeah, and they’re downright hilarious at the same time. Like the following:

7. Jake “The Snake” Roberts enjoys slapping women, would pay to do it again 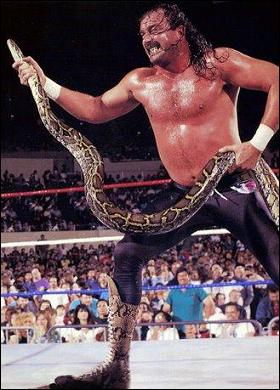 Not pictured: Hundreds of young ophidiophobics in the crowd with pants full of s--t.

Before he became a disconsolate drunkard, Jake “The Snake” Roberts was one of the more entertaining and well known pro wrestlers in the late 80s despite the fact that he never won a championship belt. Why? I mean, for the love of “Gorilla” Monsoon, the dude did invent the DDT maneuver, after all. But for the purpose of this article, why? Because he could make himself look like the most deplorable bastard on earth without resorting to overblown garbage like necrophilia or animal cruelty and subsequent feeding of one’s own dog to his owner characteristic of the “Attitude” era. He could have just cashed it all in, hinged on his (not so surprisingly entertaining) gimmick of bringing a 20-foot python to the ring, called it a day, and then slithered away into mild obscurity like so many other mid-carders of the era. But no, legends are not made thus; not content in being overshadowed by his serpentine cohort, Jake decided to employ his considerable verbal skills to attribute villainous or “snake-like” qualities to his character.

Watch this video and you’ll see what I’m talking about:

Just look at that unctuous hair. The disingenuousness in his pervert’s grin. The fiendish glimmer in his eyes. The periodic twinge of satisfaction in his robust porn-star mustache as he recounts his woman slapping antics with the hushed delivery of a serial rapist. Christ, even back in the day as an eight year old oblivious to the world’s myriad evils I could perceive that this man was a goddamn creep. I’m sure this is light years ahead of any heel in the WWE today, but I don’t watch the WWE today, so I won’t back that statement up with any sort of tangible evidence whatsoever. Still, today’s wrestlers should watch this video and take notes. Also, props to “Mean” Gene Okerlund for expressing his earnest disgust with “Get out of here! You get the hell out of here!”

Best Quote: “But the best feeling I’ve ever had in my life…”

6. Macho Man is definitely not coked out 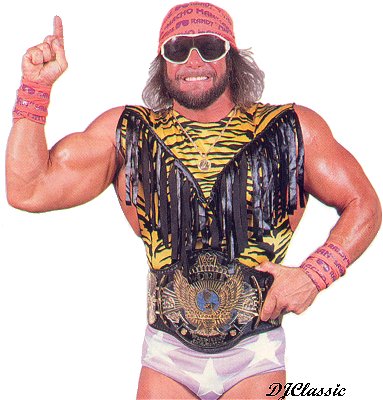 Growing up, watching the late, great Randy Savage’s interviews I remember constantly thinking about how I didn’t have the slightest idea what in the hell the guy was talking about. Was it simply because I was just a naive little boy? His promos made about as much sense to me at the time as political pundits from CNN’s Crossfire or a page from my father’s Wall Street Journal. “I can’t wait until I get older,” thought my younger self. “Then I’ll unravel this and more of life’s great mysteries. I just know it.” Well, here I am folks. A (relative) grown man… and to my disappointment and perhaps perverse fascination, I still have no goddamn idea what the man is talking about.

I could have chosen pretty much any interview featuring the Macho Man and it would have fit the bill, but this one just brings a s--t eating grin to my face every time. Everything about this promo is pure Randy Poffo gold: the predatory pacing back and forth directly in front of the camera before the interview starts; the trademark waggling of a solitary masking taped finger as he begins his diatribe; the hyperactivity displayed throughout in his incessant and erratic movements; the completion of every sentence with a crescendic and capricious outburst of one, two, sometimes three “YEAHs” in machine gun succession; eyes crazier than a subway hobo; the unkempt scraggly hair of a subway hobo, and the rugged, grating voice. It’s all there. And it’s all good. OOH, YEAH!

Best Quote: “YOUR MUSTACHE IS CROOKED!” 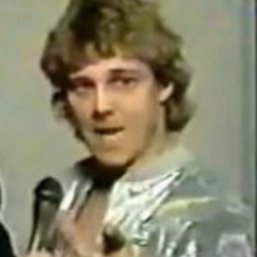 Some folks have it and some folks don’t. Some folks have it so good and have so much of said goodness that you question how God could ever give someone such an unfair advantage in life. Jumpin’ Jeff Farmer my friends, has got it. What is this “it,” you ask? The power to control the world with his overwhelming eloquence. Anything that smooth talking son of a bitch Jumpin’ Jeff Farmer commands of me, I will do. And I’m willing to wager you would also.

From the wavering inflection infused in his sentence fragments to his remarkable acumen of such Shakesperian terms as “having the tables turned on him in a wrong way,” to the perpetual fits of stuttering all the way to the nervous twitches and stammers that say “I have no idea what I’m going to say next,” Jumpin’ Jeff Farmer has had women of all ages tremulous as dogs in heat from the day he could first talk. And menfolk too. I am yours to command, Jumpin’ Jeff Farmer.

Best Quote: “And when you treat-CHEAT me out of what’s rightfully mine… that’s when I get angry!”

4. Razor Ramon will scar your soul

Okay, I’ll admit; his Tony Montana accent done in Christian Bale’s gravelly Batman voice is borderline terrible. But that’s not why Razor Ramon is the man.

Razor Ramon is the man because he doesn’t go the predictable route and say he’s going to beat his opponents up really badly or put them in the hospital or make their mothers cry when they see what he’s done to them. Oh no. He’s going to employ straight up ” misogynystic warfare like a playa and scar your f-----g soul. Just as the woman in the video who wrongfully assumed she could establish some sort of meaningful relationship with him, Razor’s opponents are nothing more than vacant shells whose minds and bodies are but mere playthings. Fin.

Best Quote: “I probably scarred her heart for life. Thas too bad!”

3. Booker T forgets for a moment that his dialogue is heard by millions 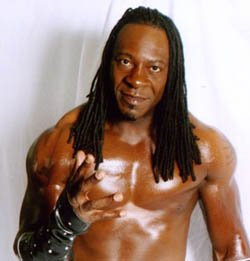 The funny part of this video isn’t even the fact that Booker T calls Hulk Hogan the N-word on a program viewed by millions of people, including and primarily consisting of small, impressionable children. Okay, that’s pretty damn funny. But the funniest part is what comes after the fact, when Booker T realizes his folly and cups his face into his enfolded hands in a display of intense shame and humiliation and “Sensational” Sherri at his side casts him a sly glance and s--t-eating grin as if to say “There there, it’s not your fault you’re a dumbass.”

2. Ric Flair was born with a golden spoon

Ric Flair isn’t actually terrible (well I can’t speak for now, or for any sixty year old man still actively pro wrassling) but I put him on this list because he reminds me of one of my high school football coaches. Usually calm and collected, the man was occasionally prone to fits of raucous hollering that came out of absolutely nowhere. Most times in mid-sentence. One minute he’d be all: “Alright boys, what we’re gonna do now is practice. Let’s go over this next play… THAT NONE OF YOU SALLIES CAN SEEM TO UNDERSTAND OR COMPLETE WITHOUT GETTING STUFFED BACK SO FAR BEHIND THE LINE OF SCRIMMAGE THAT MY NECK IS TWISTED AND MISALIGNED AS A FLESHCOVERED CORKSCREW! JIMINY CHRISTMAS!”

He didn’t even swear. He actually said the words “Jiminy Christmas,” with his voice cracking all over the place; a shining exemplification of a man whose restraint has finally deteriorated. A man who has briefly succumbed to the dark whims of the beast within and has only barely clawed back what sanity is left of his mind.

Now granted, my coach was nowhere near as captivating as Ric Flair is on a regular basis; but when this guy blew his stack, everyone listened. Whether because of how unforeseen the outbursts were or how pants-shittingly overwhelming they were, I can’t say. What I can say, however, is that they were awesome. Kind of like Ric Flair. He didn’t use vulgarity in his interviews and you could tell that most of the time he was trying to be that restrained cool guy, all slick and calm and what not, just casually talking some s--t. But when the dude flipped his s--t, you were in for a treat. Maybe not as much as the woman apparently playing with herself 1:18 into the video, but close enough.

Best Quote: “… I dress myself in alligator shoes. I wear a $15,000 Rolex! I got Mercedes Benz, Rolls Royce, the biggest house on the biggest hill on the biggest side of town… you know why I got all that? ‘Cause I was born with a golden spoon. And that took me to the World Heavyweight Wrestling Championship!”

1. Ultimate Warrior will sacrifice your pilots, crash your plane 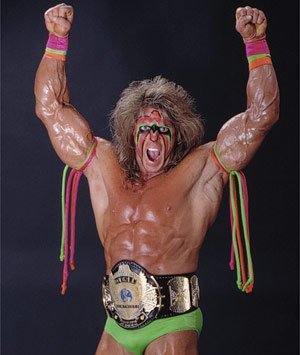 “Why do I so ardently wish to de-brain Hulk Hogan? A fine inquiry Mean Gene and I’m glad you asked. Basically it’s because… RARGHHGWWAARRR GAHHHHHH RAWWWGHHHHH!”

Just do yourself a favor and watch this video. Hell, watch any interview/promo involving the Ultimate Warrior. Don’t even attempt to understand them the first time around; don’t arch a brow in bewilderment at the fact that the Warrior assumes pilots will commit suicide for the sheer purpose of his elaborate mindgames with Hulk Hogan; don’t inquire as to whether or not his statements are figurative or metaphoric in nature; simply indulge in their sweet, sweet tumult.

Say what you will about the man’s rambling incoherencies, his bombastic and contrived lexicon, his all around batshit craziness: the bottom line is that the man is entertaining. It might lean more towards the “Mommy, why is Rover eating his own s--t?” end of the inquisitive scale, but it’s entertaining nonetheless.

Alright, fine. So he’s batshit crazy. No one ever said crazy people couldn’t be entertaining. But is the Ultimate Warrior truly the deranged lunatic that he ostensibly appears to be? Or is there more to him than what we can discern from simple face value? Are these the rambling incoherencies of a man whose mind has gone off the deep end? Or more extraordinarily still… are they the soliloquies of a man who has achieved an altered state of consciousness or sort of perverse enlightenment through madness? What in Old Norse literature was referred to as berserkergang?

“His (Odin’s) men rushed forwards without armour, were as mad as dogs or wolves, bit their shields, and were strong as bears or wild oxen, and killed people at a blow, but neither fire nor iron told upon them. This was called Berserkergang.”

Perhaps we are all victims to one of the most elaborate ruses in the history of professional wrestling. Surely no one would denounce Leonardo DiCaprio for completely engrossing himself in his latest role. So why unfairly disparage the Warrior? Maybe he’s just really, really f-----g good at playing his role. Ultimate Warrior: berserk retard or misunderstood pioneer bridging the gap between the fine line of genius and insanity? You be the judge.

6 More Wrestlers Who Should Have Criminal Records