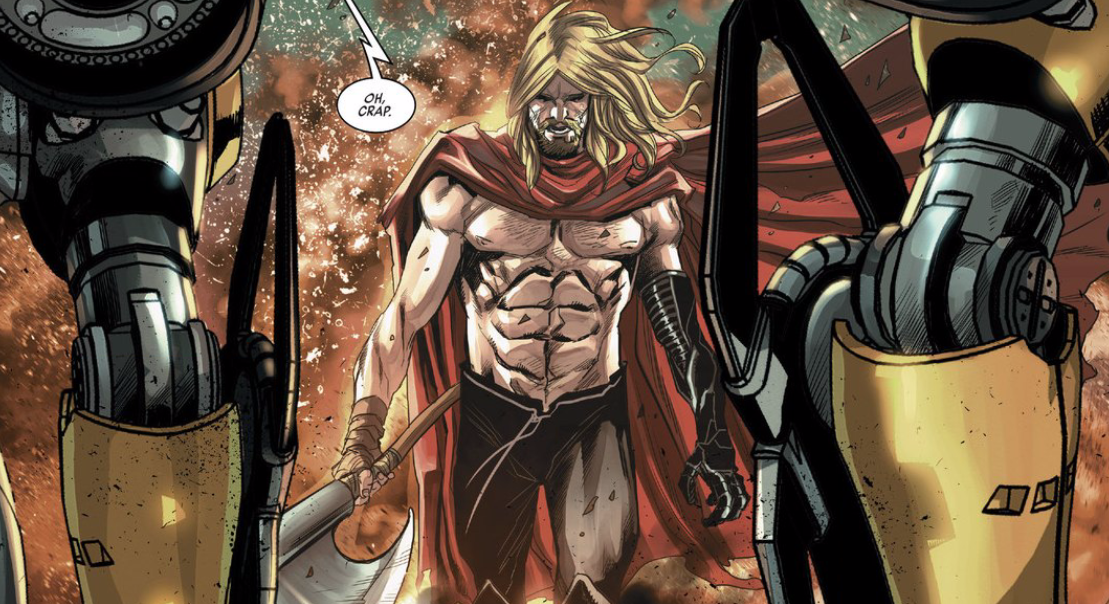 Sunspot and Namor both find themselves in dire straits as the multiverse falls apart around them. Avengers World  #21 brings the series to a close as Secret Wars looms. But with the series finale comes a single question: is it good?

Avengers World has always been a title that’s played second fiddle to Hickman’s Avengers/New Avengers saga. It initially spun out of those titles as a tertiary book in which the massive roster was allowed to splinter into smaller groups and perform tasks that were more in the vein of typical superhero stories. Since Frank Barbiere took over as writer, Avengers World has been primarily focused on filling in some of the gaps during the eight month time jump in the two main series. Avengers World #21 closes this arc, and the series, by showing how Odinson joined Sunspot’s team and Namor’s decaying relationship with the Cabal.

The issue opens on an alternate Earth as a farmer by the name of Reed Richards is greeted by Namor. Frank Barbiere plays nicely with readers’ expectations, cutting away and letting previous events in the arc fill in the blanks while transitioning to Bobby and Hyperion. The two heroes discuss how to handle Odinson. Hyperion remarks that while Thor is still powerful, he’s lost some of his gusto along with his hammer. Bobby acknowledges this and devises a plan to bring Odinson into the fold.

Avengers World #21 really begins to pick up as Thanos and the Cabal discover that Namor has left for the next world without them. The Cabal has made it a point to torture the heroes of alternate Earths before destroying the world, and Thanos seems particularly angered that someone would deprive him of this game. This leads to the highlight of the issue as Namor, dismayed by the behavior of the Cabal chooses instead to fight them. A one-on-one brawl ensues between Namor and Thanos and – whether powered by will or his opponent’s underestimation – Namor is able to land some serious blows on the Mad Titan. This is a Namor willing to die, not for his own pride, but for the right of strangers not to be humiliated before their death.

The feather resistance is strong with this one.

Marco Checchetto’s artwork has been a marvel throughout Avengers World and here it’s no different; Checchetto’s characters all have a palpable sense of weight, as if one could reach into a panel and touch the characters. His Namor stands out in this issue as his image here reflects his change of heart. Gone is the hardened visage warrior-king of New Avengers. This Namor’s face is youthful, and his eyes convey a deep sadness. This isn’t an arrogant prince, this is a fallen angel trying to atone.

But characters are not the only place Checchetto excels. There’s a real sense of movement in these panels. Part of that is the constant billowing of leaves in the wind – this is a world that lives and breathes. And there’s a kinetic frenzy when Thor defends the Children of the Sun from A.I.M.

The real problem with Avengers World #21 is the same flaw that’s plagued most of the “Before Time Runs Out” arc. Its reveals don’t pack any real punch. It’s an odd complaint, sure, but watching Sunspot recruit his team has been mundane for the most part, the few surprises being how he manipulates A.I.M. to do his bidding. And while Namor’s emotional turn in this issue makes for good drama, one can’t help but wonder if it would have been more entertaining to see just how the Cabal took the Necropolis and Wakanda under their control, considering the home of the Black Panther is supposed to be one of the most advanced nations in the world. Certainly, the Cabal would have outmatched the Golden City, but it feels a bit like readers were shorted the opportunity to see that clash.

Avengers World #21 is a solid end to a series that had to prove its own existence. Avengers World could have easily been an unnecessary entry in Marvel’s publishing line, but by centering itself around good character beats and fun plots, it found its niche. The final issue sends the series off nicely, as Bobby’s Avengers World team emerges read to take on the threats ahead. The ending is bittersweet, the final page acknowledges that Secret Wars lies ahead, but one can’t help but feel hope for both Sunspot’s Avengers and Namor.

Is it Good? ApocalyptiGirl: An Aria For the End Times Review

Is It Good? Master of Kung Fu #1 Review