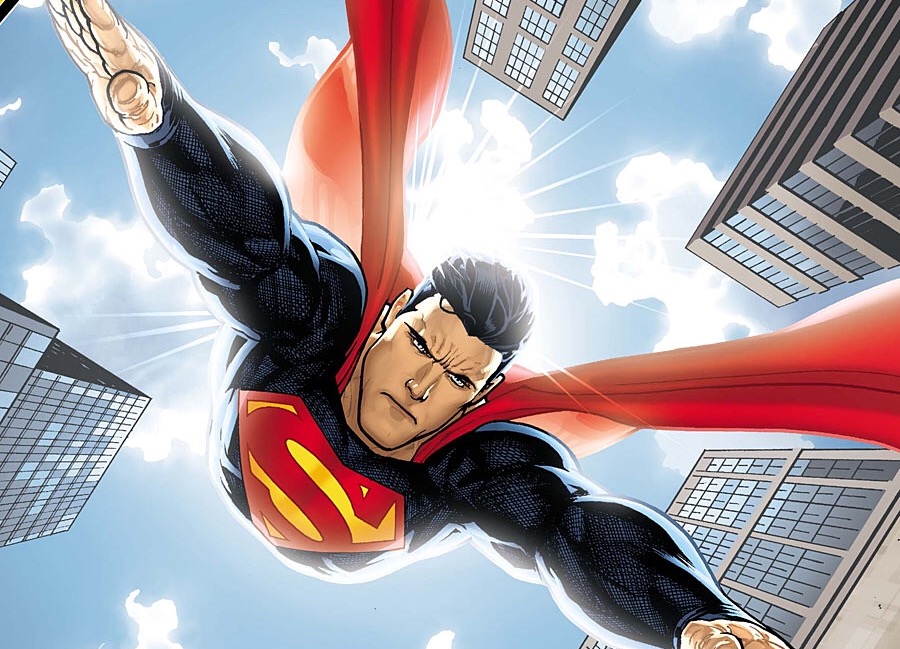 After an issue’s worth of necessary, if not particularly enthralling exposition setting up the new Superman books in last week’s Superman: Rebirth #1, we’re finally ready to have some fun with good ol’ Supes. Not with the proper Superman #1–that comes next week courtesy of Superman: Rebirth #1 co-writers Peter Tomasi and Patrick Gleason–but with this week’s Action Comics #957, written by veteran Superman scribe Dan Jurgens (of “The Death Of Superman” fame, as well as the recent Superman: Lois and Clark series) with art by Patrick Zircher, colors by Tomeu Morey, and letters by Rob Leigh. DC is billing the 957th issue of a series as a jumping-on point–is it good?

Now this is more like it! After what felt like editorial housekeeping with Superman: Rebirth #1 (which, in retrospect, I may have been too charitable with in my review, though I maintain that it was a necessary issue), and the similarly transitionary “The Final Days of Superman” crossover, Jurgens, Zircher, and company hit us with this fun, fresh, and clever new beginning. While I can’t guarantee that it won’t confuse new readers a bit, it certainly doesn’t feel overburdened by the shackles of complicated continuity.

Before I go any further, I should admit (even though I might get attacked for it in the comments) I don’t believe I have ever read a single comic by Dan Jurgens, including his lengthy 90’s Superman run. As such, I can’t speak to how this issue does or does not relate to his previous work, in regards to the character or in general. But in some ways, perhaps that makes me more qualified to review this comic. After all, this is supposed to be a new jumping-on point, right?

Sort of. Again, you shouldn’t have to feel like you need to go way back to 1938’s Action Comics #1 to read this issue, but you should at least pick up Superman: Rebirth #1. From there, the basic premise of this new direction should make more sense: post-Crisis Superman from the previous continuity was transported, along with his wife, Lois, and son, Jonathan, to the current continuity (New 52) DC universe, where this older Clark operated as Superman in secret before the current-continuity Superman/Clark Kent died, forcing the Superman of the past to become the Superman of the present once again.

And as if that weren’t complicated enough, before the bona fide (well, post-Crisis) Superman even had a chance to publicly reveal himself to the world, Lex Luthor went ahead and declared himself to be the new Superman, fashioning himself a sleek new Iron Man-like mechanical costume with an electronically brightened “S” shield and a classic red cape.

Hilarity ensues. Or, at least, a very satisfying conflict. Because as over-complicated as it may sound (and perhaps may be), this is actually a brilliant idea that in some ways could only have been done with these kind of comic book continuity shenanigans.

Part of what makes Lex Luthor such a great character–and indeed, one of the all-time great villains–is the way that he interacts with the idea of human potential, which has been a recurring theme in the Superman comics since the beginning. Superman is an aspirational hero. We can never hope to have his physical powers, but we can try our damnedest to use whatever powers we do have to approach, if not necessarily match, his greatest power, which is super-virtuousness.

Lex serves as a foil largely because, despite the fact that his background very much rooted in science fiction tropes, there’s nothing particularly supernatural about him. His technology (like, you know flying robot suits) may not exist, but at heart, he is still a human. A human that, admittedly, is as smart and rich as the story demands (that line from Jeph Loeb and Tim Sale’s Superman for All Seasons comes to mind about it literally not being worth Luthor’s time to pick a $100 bill off the ground), but as far as science is concerned, he’s much more rooted in reality.

There have been several comics in which Luthor has complained that he could make the world a better place if not for that pesky Superman getting in his way. He believes that Superman is a hindrance to humanity’s potential, making people believe that they need a godlike being rather than picking themselves up by their own bootstraps and helping themselves. Of course, the truth is that Superman was never in his way, and that he really could have done great things to benefit humanity if he stopped obsessing over his rival. That squandering of his own potential is another part of what makes him such an effective, relevant villain.
So here Luthor is, with Superman finally dead and the opportunity presenting itself for the villain to finally become the hero that he always knew he could be.

Then Superman inexplicably shows up again and shatters his dreams, once again.

That makes for some entertaining drama and subtext in this issue, and I look forward to seeing how Jurgens plays with it from here throughout the rest of the series. If the premise of this run, or even just this arc, is Superman (Clark Kent) vs. Superman (Lex Luthor), that’s exciting, and something to keep me sticking around.

There’s at least one major twist in this issue that I won’t give away (I’m not even referring to the last-page reveal), plenty of great dialogue, and a few great moments from the new Kent family. Superman has often functioned as a father figure of sorts, so it makes sense from a thematic perspective to make him a literal father (not to mention a bit older), as well as being emotionally satisfying.

The art by Patrick Zircher is functional, easy-to-follow, detailed, and at times quite attractive, but it still didn’t wow me. It’s fine for what it is, which is comparable to other strongly detailed, vaguely-realistic artists like Bryan Hitch, David Finch, and latter-era Jim Lee that I see as the quintessential contemporary superhero comic book artists. It’s perfectly serviceable, and frankly, this kind of story doesn’t need quirky or experimental visuals, even if I do prefer my art to be a bit more stylized at times. Sometimes, you just need an artist that will get the job done, and Zircher does that and then some.

While Action Comics #957 isn’t a masterpiece, it’s difficult to find much to complain about. The biggest problem is that it still has a complicated premise that may baffle new readers, yet it uses this strange situation to its advantage. If you’re willing to overlook how convoluted DC’s current canon is–which you should, because that isn’t this particular comic’s fault–I wholeheartedly recommend jumping onto Action Comics right now.