'The Movie' review: Keeping it real 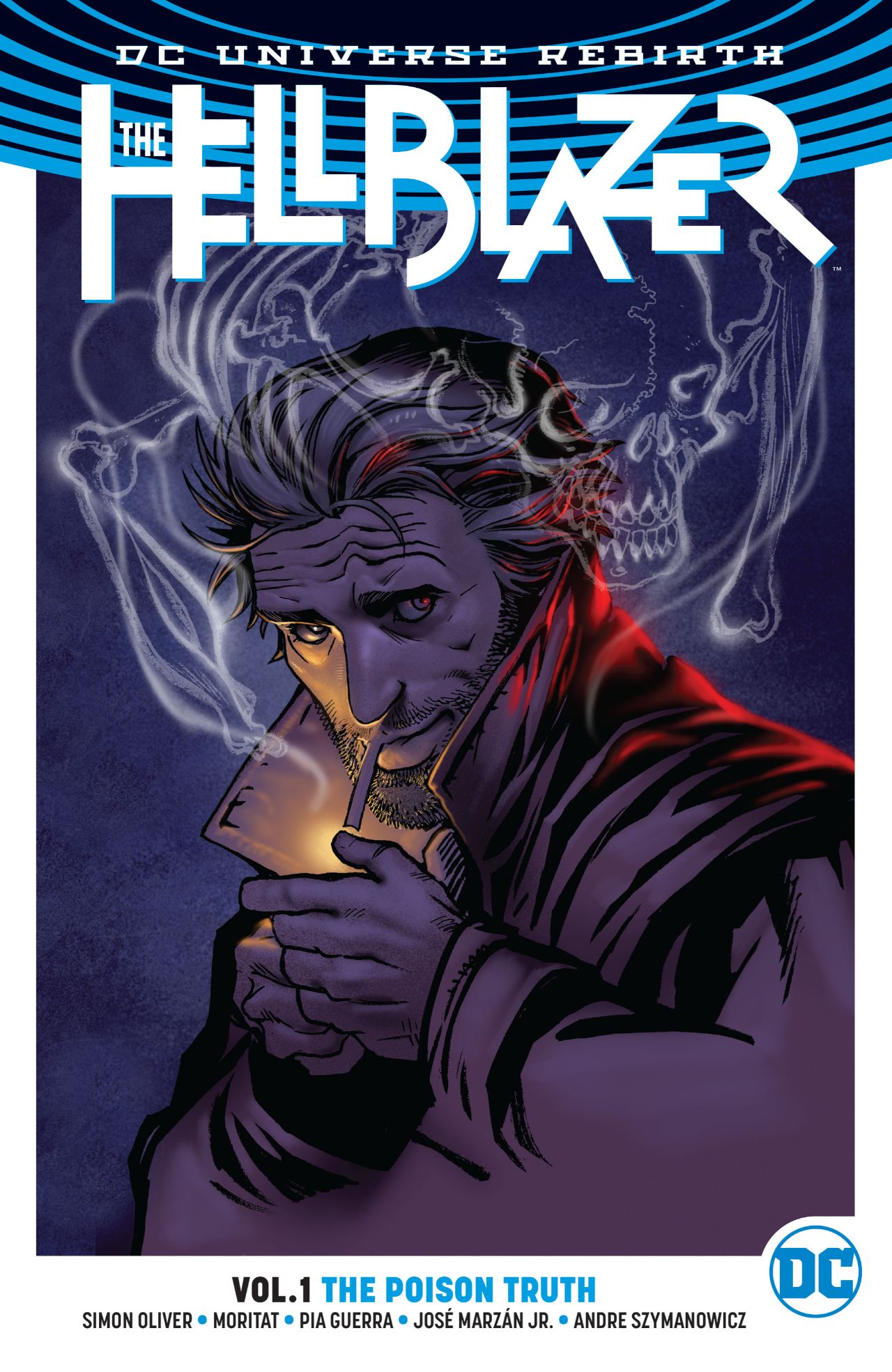 With collaborators Moritat and Pia Guerra, writer Simon Oliver returns John Constantine to his native stomping grounds in London, but his unfocused plotting reveals a struggle to find the balance between the character’s classic horror roots and the updated, all-ages version.

The Hellblazer Vol. 1: The Poison Truth

This collection brings together the Rebirth one-shot and the first six issues of the current ongoing, providing a healthy sampling of FBP scripter Oliver’s approach to the character and his seedy, demon-infested world. The first issue immediately sums up many of the strengths and weaknesses of this run so far; the central conflict is classic Constantine, our hero outgunned by mystical forces that threaten the entire population of London and, as usual, winning out by acting selfishly and manipulating others to aid in his schemes.

Nonetheless, the plot feels very much like a low-suspense retread of the kind of situation we’ve seen Constantine escape hundreds of times. It’s only surprising that he would allow so much time to pass while he wasted away in America, where his beloved Silk Cuts are a rare commodity. The only really distinctive elements in this introductory story are the return of Mercury, a young woman Constantine met as a little girl way back in the Jamie Delano run on the original Hellblazer series, and an appearance from Swamp Thing, Wonder Woman, and Shazam.

While the reminders of Constantine’s past scattered throughout the volume are welcome, the connections to the wider DC Universe just seem awkward, and that’s an issue that never gets resolved. Rather, as the plot moves forward it often feels like pages from Scott Snyder’s New 52 run on Swamp Thing have been randomly interspersed with Constantine’s story. The Hellblazer exists at an uneasy intersection between the “mature readers” horror book of yore and an all ages comic in a superhero universe, where there may a bit of blood and off-color humor here and there, but the monsters are never too frightening and the harsher swears are censored.

The much bigger problem is that  larger story arc never becomes terribly compelling. The godlike villain, a djinn bent on revenge after centuries of injustice against his people from the human race, is more than powerful enough to be a major threat to a con man lead who mostly gets by on charm and deception. Yet, there seems to be little urgency to draw these two into direct conflict. Oliver chooses to stretch out the central story while involving Constantine in more mundane trials like escaping a pair of menacing lackeys.

Fortunately, it’s in the street-level scenes that both Oliver and Moritat tend to shine. The most entertaining parts of the collection consist of Constantine bantering with his old friends and acquaintances, eventually facing down a former skinhead bookie with his gang. The political awareness, always a key ingredient in Hellblazer, comes through most powerfully in these kinds of moments. Oliver scatters amusing references to Trump and Brexit through the script, connecting current struggles to the cultural battles of the Thatcher era that birthed the original series.

The issue featuring those thugs is the most exciting of the ones collected here, placing Constantine in a room with one threat, delivering plenty of fun dialogue, and then upping the ante. When the gang meets a supernatural danger, it’s some of the most evocative, dynamic art Moritat delivers in any of these issues. That scene is paired with interludes of Swamp Thing coming face-to-face with the creatures of the Rot that still seem a bit disjointed in context, but at least they also look cool.

Unfortunately, that high point is immediately followed by a jarring shift in artists. There’s no questioning Guerra’s skill, amply proven across the run of Y: The Last Man. However, her clean, down-to-earth style is such a huge shift from Moritat’s more expressionistic approach that it feels like reading a completely different book. Suddenly, all the characters are younger and more attractive, further smoothing the rough edges that are most closely associated with the better moments in the narrative. And it certainly doesn’t help that her arrival comes at the same time as a slackening in the pace that leads to an anticlimactic conclusion.

This volume may be meant as a mere introduction to Oliver’s approach to the series, but there’s not enough drive in the plot to make returning for the next one particularly appealing. There are some strong concepts and moments here, especially in the quieter interactions between characters, but it never quite coheres into an involving overall package.

The Hellblazer Vol. 1: The Poison Truth
Is it good?
Die-hard Constantine fans will find a lot to enjoy in this series, but the plot lacks urgency.
There a number of strong moments with intriguing characterization.
Moritat and Pia Guerra each contribute some nice visuals.
The overall plot is lacking, and Oliver seems to struggle to find the right tone.
The switch in artists makes for an incoherent visual identity.
Numerous references to the Vertigo series invite some unflattering comparisons.
6.5
Good