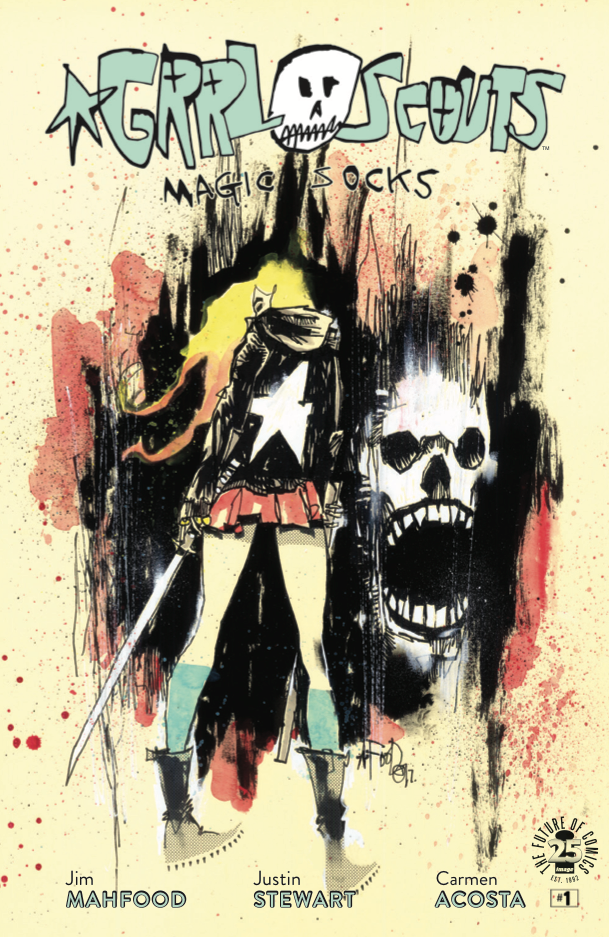 Jim Mahfood has brought his original series-turned-comic-turned-TV show-turned-back-to-comic to Image, and chaos-loving comic readers are better for it. This series is written, drawn and lettered by Mahfood which means an explosion of unique and awesome art is available at comic shops.

JIM MAHFOOD (Tank Girl, Clerks) debuts his first new creator-owned work in years with the glorious return of GRRL SCOUTS! Join Gwen, Daphne, and Rita as they reunite for a pulse-pounding psychedelic adventure through the streets of Freak City. This first issue is stuffed to the gills with an action-packed story, bonus art, soundtrack, sketchbook, and a behind-the-scenes comic thingy. Plus, a variant cover by the one and only SKOTTIE YOUNG! Pure fun! Pure flavor!

The energy Mahfood is capable of bringing us is worth the purchase alone–just look at his run on Tank Girl. He even drew a fantastic Miami Vice reboot. Every panel is tattoo worthy (and ready too) with an explosion of harsh lines and Ben-Day dots throughout. It’s a style that gets you hyped which you can’t say every new comic book day.

You can practically smell the deplorable stickiness on every page of this book. Like a love letter to run-down strip clubs and ultra violence, Mahfood delivers intense visuals worth three reads. Opening and closing with a tiny comic strip, Mahfood takes your expectations and throws them in the trash. Soon you’re meeting a nice girl who is very nuts, seeing her mom gunned down by her request, and getting on with the crazy drug fueled adventure.

There are really no half measures with Grrl Scouts: Magic Socks which is probably what most folks will dig about it. After meeting the evil-ass villain we get a taste of Daphne who is all kinds of nuts. She does blow after hitting the stripper pole and then knocks the s--t out of a bunch of huge goons. All in her blue socks which end up being the cliffhanger’s big question mark. Mahfood balances Daphne well with her ex-compatriots who are a lot calmer but just as badass. By the end of the issue it’s clear who these chicas are and how they’re different.

There’s a montage of what Daphne did to Josie when they were younger that had me scratching my head. Up until this point there was still some semblance of realism, but this montage is filled with Looney Tunes style violence Daphne inflicted on Josie. Are we to believe they’re embellishing or can Josie really survive a shark attack or being poisoned? It’s confusing.

Aside from this, Mahfood hasn’t yet established the dynamics of these characters so it’s tricky to get a bead on their relationships. The general personalities are there but who they are to each other is a question mark.

Grrl Scouts: Magic Socks #1
Is It Good?
Chaotic visuals and punk sensibilities. Get some!
Strong art that's high energy and unique
Crazy story with an insane group of characters
A flashback made me wonder how realistic this all is
9.5
Great
Buy Now
Comixology/Amazon