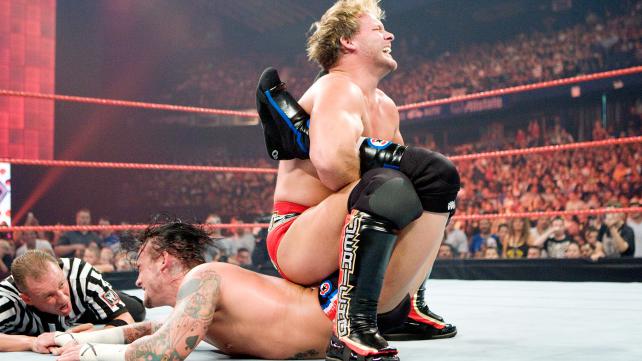 Greetings again, Kayfabers.  In a Special Edition of ELiK, we’re going to delve into the world of mixed martial rts, douchebag-looking fighters, and calling a move by the proper name.  In deference to E & C…<shhhhhhp> Let’s go.

On Saturday, September 30, 2017, MMA fighter Jonno Mears pulled off something never seen in televised mixed martial arts competition: he tapped out an opponent using a move from the world of professional wrestling.  That this was the actual finish is astounding to MMA and wrestling fans alike.  The debate comes in what move Jonno actually applied and why that matters.  Hit the tape and see me on the flip side.

The tape, and even WWE superstar/Fozzie front-man Chris Jericho, says that the move is indeed the Walls of Jericho, a move introduced in the WWE in 1999 by the aforementioned Ayatollah of Rock and Roll-ah.  The move is a variation of a variation and has had many different applications in Jericho’s long wrestling career.  Here’s a look back at the original application of the “Walls,” originally called the Liontamer in his WCW days and before that in Japan, Mexico, and ECW.

Notice how Jericho’s knee is on the head of his opponent and all of Jericho’s weight (and his opponent’s) is balanced on one of the opponent’s shoulders.  Any movement adds torque to the spine, increasing the pain.  This move is a semi-standing variation on the traditional Boston Crab submission maneuver.  Jericho used this move into his WWE career, but later changed things up, placing more emphasis on pressure and less on balance.

The Liontamer became the Walls of Jericho in WWE, but the modified version of the move began later in Jericho’s career.  In this version, he sits on his opponent’s back, cranking both legs and hips backwards, balancing weight and leverage on the lower spine.  This is much closer to the traditional Boston Crab.  In comparison, here are two Boston Crabs from the same match: Steve Austin vs Bret Hart Submission Match at WrestleMania 13, considered one of the finest wrestling matches ever.

In the first image, Stone Cold Steve Austin applies the traditional Boston Crab, focused on stretching the quadriceps muscles as well as the lower back.  Austin leans forward while pulling up on the legs.  Bret Hart, however, applied a Single-Leg Boston Crab, crossing Austin’s right leg over Hart’s left leg and under his left arm, applying a cross-torsion to the move, unavailable in any other version.

There are many other variations of the Boston Crab (I’m looking at you, Dean Malenko), but these are the ones key to Jonno Mears’ surprise victory.  So, which did he apply?  Initially, I was upset and thought that he had wrongly called the move the Walls of Jericho.  I am happy to admit when I am wrong, however.  While not a master of the move, Mears clearly has both legs trapped, sits on his opponent’s lower back and leans backwards to add to the spinal pressure.  That, dear readers, is the Walls of Jericho.  And to quote the Highlight of the Night himself:

Explain Like I’m Kayfabe: How do Irish Whips make sense?