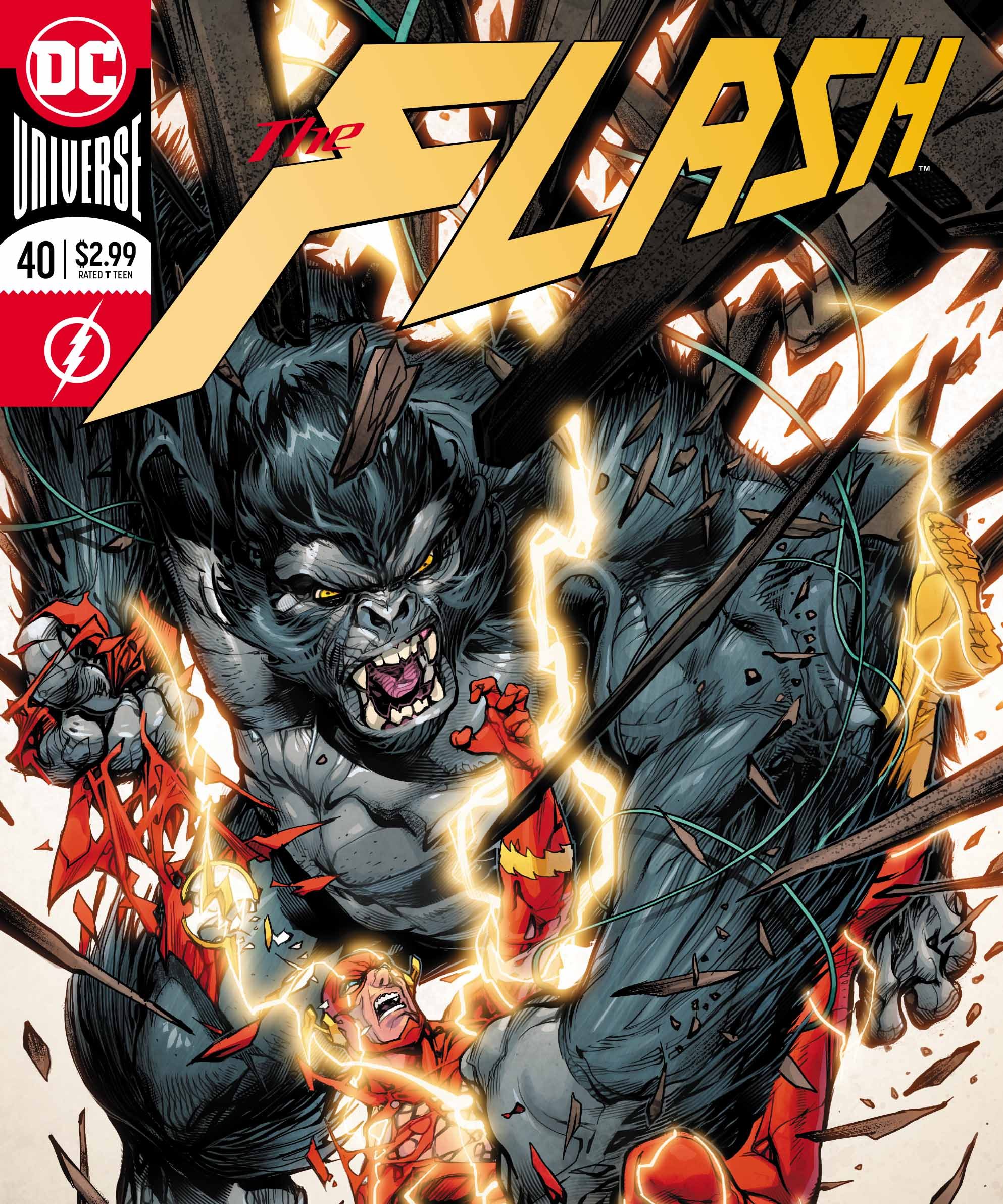 Welcome to the second issue of “Perfect Storm,” the arc preluding “Flash War” that started in The Flash #39 and is continuing into Flash #40 and beyond. Joshua Williamson has set out to complete a set of tasks before he hits “Flash War,” and what this arc entails is obvious coming from this issue. “Perfect Storm” seems to be about the deconstruction of Barry Allen and what it means for him to be The Flash. With this issue we get superb writing from Joshua Williamson and great art from Carmine Di Giandomenico.

“PERFECT STORM” part two! Gorilla Grodd is after Central City’s Speed Force, and The Flash is on the run! But the one thing Barry Allen can’t outrun is the truth…and his nemesis knows a terrible secret about the Fastest Man Alive.

First off I’m going to touch on what I mentioned in the opening paragraph. Since his arrival on the Flash title in 2016, Williamson seems to have set out to do at least one big thing with each arc.

“Lightning Strikes Twice” brought back “mentor Barry” and gave a new origin to New 52 Wally, Shadowland brought back Iris romance. “Rogues Reloaded” brought back the Rogues properly. “Sins of Father” gave a conclusion to Daniel West. “Running Scared” brought back Eobard and made Barry introspect more. “Negative” brought doubt and a realization he needs to work with others more. “Black Hole Rising” brought in distrust but connection back with NuWally more. “Iron Heights” brought in an introspection to how he’s been messing up, as well as bringing back Wolfe and getting rid of Turbine, and the Annual brought back Top and Zolomon and a bunch of other small continuity based things such as Bart and members of the Flash family, even if it was just in cameos. This shows that Williamson has been trying to build with the Flash franchise since he took over in 2016 and seems to all be building to “Flash War,” where Williamson will build Flash as a franchise back to at least 2009 levels or even 2005 levels, where Flash was strongest, and define Barry and Wally fully while giving them their places within the DCU.

This issue really shows Grodd breaking down what Barry’s character is about and showing how there isn’t currently much to him besides being The Flash, while also showing how strong Grodd is when he isn’t just the primal brute that he is so often portrayed as. He is also completely ruthless, as seen when Barry offers to help find a cure for his condition, but Grodd tells him he’d ratheer just take his speedforce. The return of Wally West to the main Flash title is so great to see as he’s been missing for far too long.

Di Giandomenico’s art has improved leaps and bounds since “Lightning Strikes Twice.” Compare his first issue to this issue and there’s a noticeable difference. He’s become one of the best artists to draw The Flash and really shows commitment to the title through his artwork.

The Flash #40
Is it good?
An amazing issue that provides meta commentary on the state of Barry Allen while setting a road ahead to Flash War.
Williamson's writing has come leaps and bounds since the start and it's more than evident here.
Likewise Di Giandomenico's art has also improved drastically.
Williamson's meta commentary is excellent here and brings excitement of what comes next.
9.5
Great
Buy Now
Comixology/Amazon