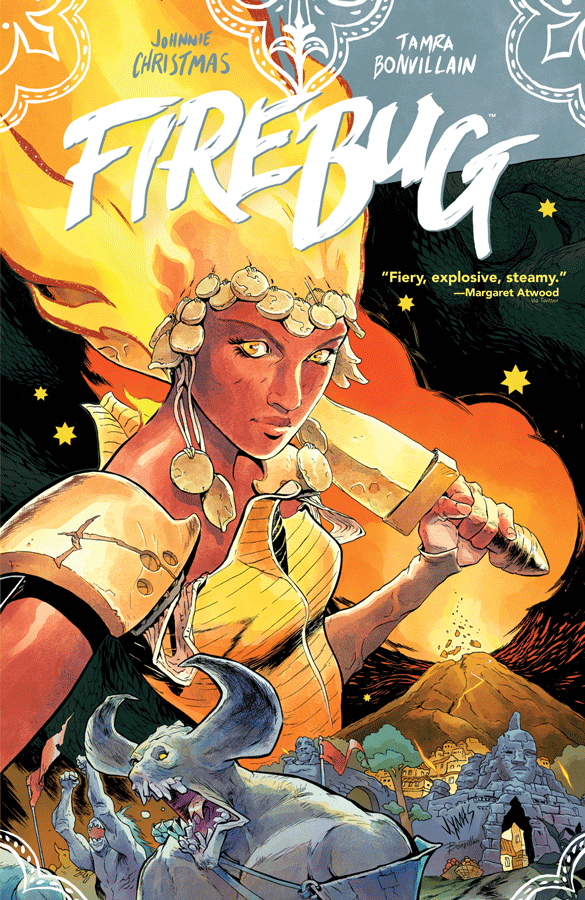 Originally appearing in the anthology magazine Island, Firebug is finally being released in its entirety in trade paperback form. Firebug tells the story of Keegan, a young woman turned fire goddesses, as she deals with the fact that her power might bring humanity’s destruction instead of salvation. It’s a beautifully illustrated story of finding yourself and overcoming adversity.

The setting is great. It’s a semi-tribal society, and all the ins and outs of the world aren’t explained fully, giving an air of intrigue to just how it works. I found myself wanting to know more about the society, its people, and the way the goddesses’ power worked, but not to the point that it was annoying that some of these things were being kept from me. The characters are similarly crafted, as their motivations are clear and their personalities well developed, but there’s still more behind it that isn’t disclosed. It’s a nice use of the comic medium’s rule of “show, don’t tell.”

The pace of the story is strange. Time passes really quickly at points and that threw me off regarding exactly where we were in the story. The tale could have been compacted into less time, so it wouldn’t have felt as jarring that we were jumping between twenty pages of development in two. This, though, is my largest gripe with Firebug, and it’s not so bad that I wouldn’t recommend it. It does make the story flow less organically, and is jarring at some points, but again, not a cardinal sin.

The fight scenes are great, especially the final one, and flow smoothly without interrupting the pace. Johnnie Christmas is a wonderful visual storyteller, and his style fits the story very well. The designs of the monsters, especially the water goddess, were great, and the people were expressive. I also really enjoyed the backgrounds. Most of the story takes place in the wilderness, so the backgrounds are similarly lush. The rendering of fire is beautiful as well.

With Firebug, Christmas has expanded upon his previous work and made a story that encompasses religion, self-discovery, love, and family. The art is brisk and gets the job done while still being lush and beautiful. The characters are interesting, the setting immersive, and the story engaging. It’s definitely a much better read as an OGN rather than broken up as it was in Island — there’s more room for the story to breathe. Altogether, Firebug is a great story that might suffer from some poor pacing, but the art and storytelling saves it.

Firebug
Is it good?
Firebug is a great story that might suffer from some poor pacing, but the art saves it.
Art fits the story.
Great world building.
Pacing is weird, and it distracts from the story
8
Good
Buy Now
Comixology/Amazon