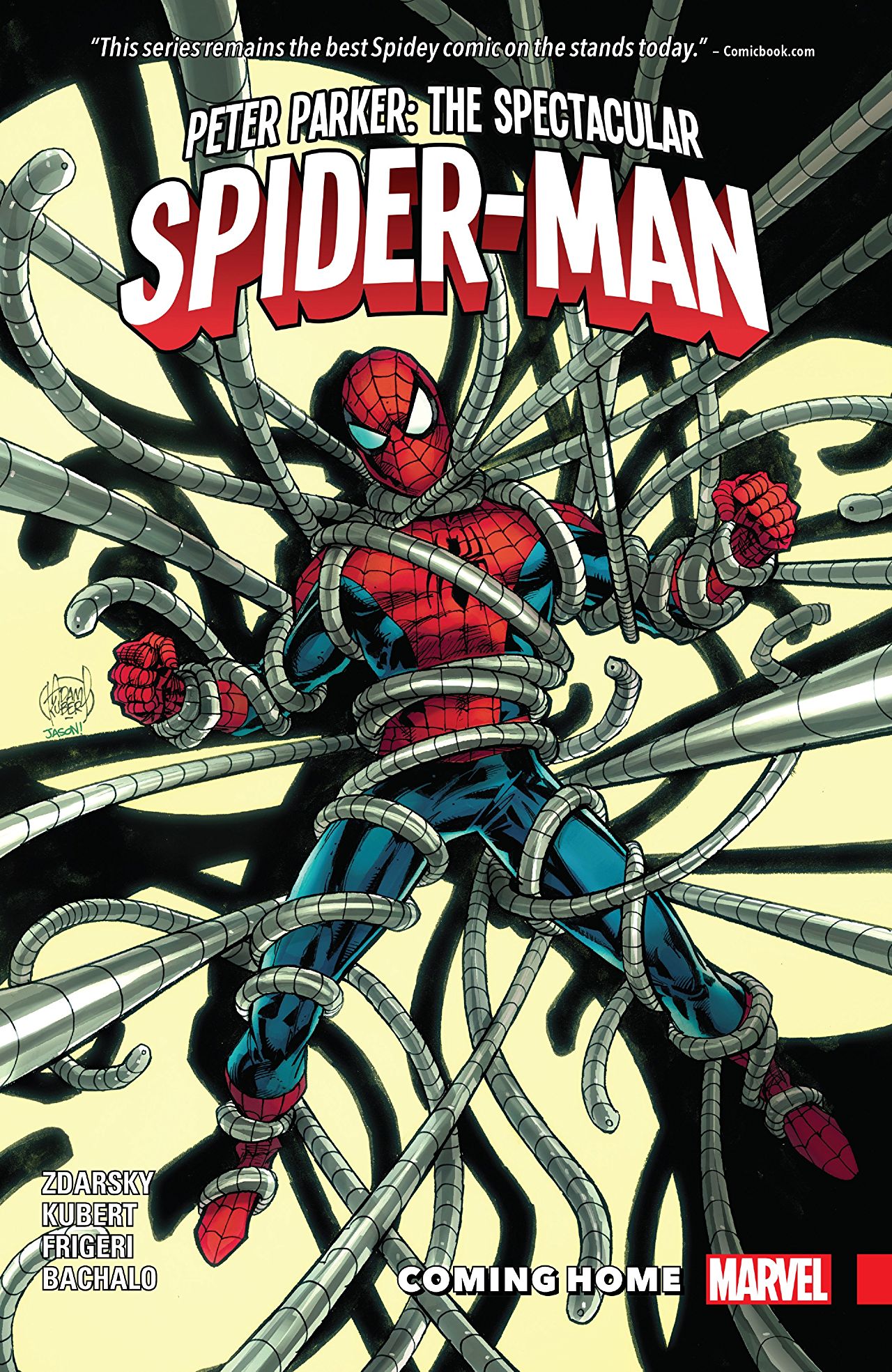 Let’s get this out of the way…Chip Zdarsky’s love of Spider-Man made me cry. More specifically, his love of Spidey, so perfectly depicted and executed in Peter Parker: The Spectacular Spider-Man #310, included as the last issue of this volume made me cry. But, his authentic, honest love and appreciation for this character, who I, and so many others — including the artists here — love as well as the care with which he brings Peter and Spidey to life throughout the stories included within (issues #304-310) is so admirable, endearing, and effective that I can’t help but say that everything leading up to that final issue is truly what made me cry.

With that out of the way, let’s get into what makes this Spidey collection just so good.

“Peter Parker, and his allies Teresa Parker and J. Jonah Jameson have saved the past from the Tinkerer’s nefarious scheme — that’s good! But they’ve returned to a future they never knew — that’s bad! Because in a world without Spider-Man, Norman Osborn reigns supreme! Can Spidey trust one of history’s greatest villains to help him fix the timeline? Meanwhile, the Vedomi, a universal collective of artificial intelligences, are intent on destroying all mankind — and it’s up to Spidey to stop them! Then, brace yourself for a Sandman story like no other, as what should have been a simple altercation suddenly turns very dark! And in a very special tale, filmmakers set out to document Spider-Man’s impact on New York City — but there’s no way they could have predicted what happens to them next!”

What’s it get right?

Coming hot off a super serious time traveling story that was a little heavy handed for my liking, Zdarsky redirects the conclusion of the Vedomi story ever-so-slightly into a still serious, poignant story about responsibility and culpability but with a hint of dark humor that fares much better than the preceding issues. I particularly love J. J. Jameson’s self-inserted self-importance in times of great threat or need, Spidey going so far as to call him his “ineffective guardian angel”. That same attention to a fitting tonal balance (great power, great responsibility) but with the dry humor and heartfulness Zdarsky is known for carries through the rest of the stories here, too. It’s a tough thing to nail, but one that is done exceedingly well here through a dark, gritty story with the Vedomi, an artistic, morose one with the Sandman issues, and then a devastatingly sad but impacting and ultimately hopeful one with #310, the perfect closer that further blurs the line between Peter and Spidey in a fitting way.

Speaking of all things in balance, the pacing of these stories is crisp and exact. Each one has its own individual arcs — feeding both character development and larger plot points — that feels natural as they expand but are also so clearly planned to the umpteenth degree. Things occur in a sensible way, heroes come and go at the right times and for the right reasons, such as Daredevil assisting for a bit, or the ebb and flow of the Sandman stories as he turns inward in a kind of ouroboros-like fight against himself. If you want a character’s actions and motivations to make sense, you need to have a world that acts organically in response to them — Zdarsky and the artists here do a fantastic job of setting that up.

Which brings us to that art which, for the most part here, it’s a varied, expressive and entirely unique treat that is relatively unparalleled by its contemporaries today in execution. Especially the duo of Sandman issues which use a pasting of semi-real photographic effect and hyper stylized art in sharp contrast to each other to deliver a really cool, dreamy neo-noir detail. All three arcs are different in their effect, and while the Vedomi focused ones are certainly more pedestrian, they still pack a dark, dour punch as well — further emphasizing how wonderfully committed everyone was to be bringing the character nailed in the narrative to life in the visual language of the book as well.

Lastly, I would be remiss to not say that among all writers who have written Peter/Spider-Man, many of whom I love and admire for their own takes of one of my favorite characters all his quirks and best and worst attributes laid bare by their attempts, Zdarsky is undeniably one of the best at channeling everything he is meant to be. Time and time again, with opportunity after opportunity this Peter chooses to be selfless, to be forgiving, supportive, understanding and human despite the flaws of others and his own. Nowhere is this more apparent than in the final issue of the collection, which I dare not spoil, but I implore you check it out and you’ll surely see what I mean.

Very little is amiss here, if anything at all. The initial story is the weakest of the three — a little convoluted in narrative and artistic execution (panels kind of float around the pages) but most everything else is solid, understanding that your mileage may very with the artistic liberties taken in the Sandman focused issues, ones I happened to love but understand may not appeal to everyone.

This is one of the best Spider-Man collections I have read in recent history. It’s an immensely well crafted, exact affair that highlights the best aspects of both Peter Parker, and Spider-Man in a tightly executed, serious and heartfelt package that I can’t imagine most anyone finding fault with. Chip Zdarsky made me cry with his spider-words and I couldn’t be happier for it.

Peter Parker: The Spectacular Spider-Man Vol. 4
Is it good?
Chip Zdarsky and company's take on Spider-Man is one of the best in years, bringing a serious, sometimes heartbreaking but also laugh out loud funny attention to the character that carries him through story arc after story arc in an exceedingly well crafted collection that stands untouched by its contemporaries.
Issue #310 is that good, seriously.
The artistic experimentation on display throughout the Sandman story is strange and enthralling in equal measure - I found myself totally and pleasantly drawn into it.
The narrative and visual balance is good; Zdarsky knows when to lay off the dialogue so the artists can run full speed with telling things through expression and motion.
But when the narrative needs to do its work, it's also well balanced -- riding a difficult line between dark and serious and funny and heartfelt in an unparalleled way.
The Vedomi story is still a little self serious and uneven.
10
Fantastic
Buy Now
Comixology/Amazon

‘Spidey: School’s Out’ Gets Spider-Man and Peter Parker Right

‘The Amazing Spider-Man: Renew Your Vows Vol. 4: Are You Okay, Annie?’ Review