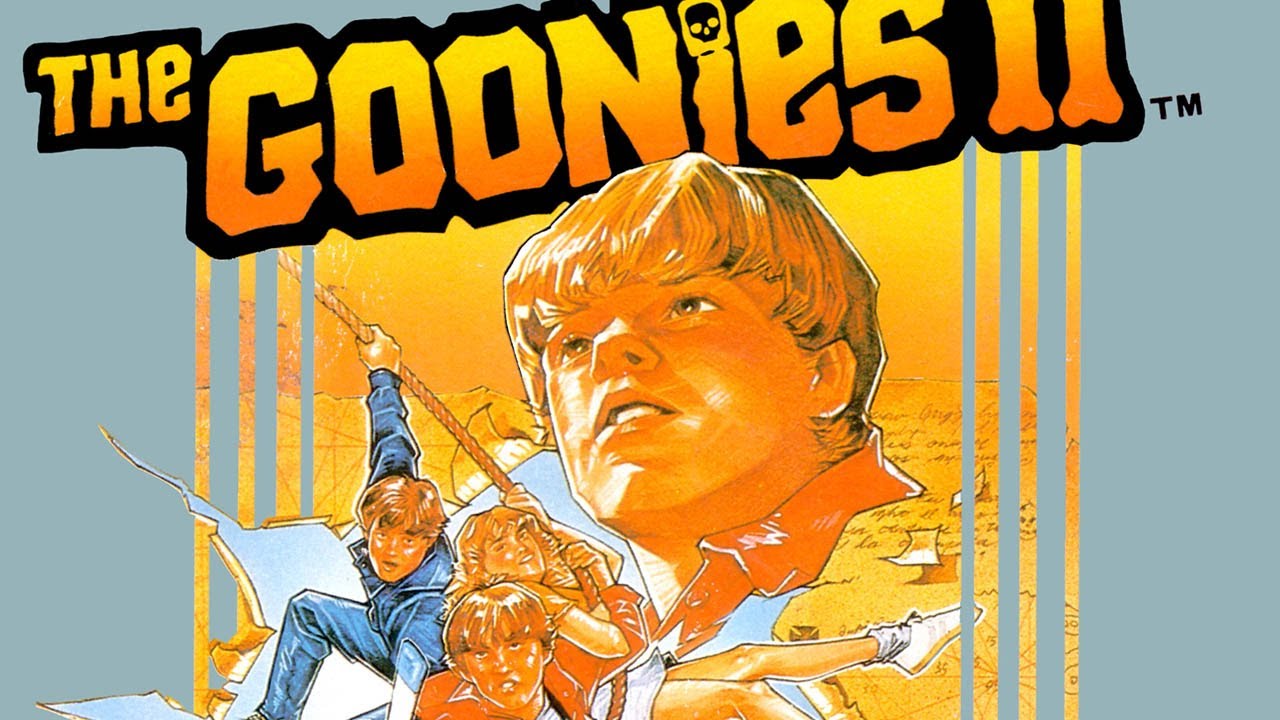 I had recently re-watched The Goonies with my partner and a couple of my best friends, one of whom had never seen the film before in her life. I know – our jaws hit the floor when we heard that too. It had been a hot minute since I had last watched the film, but it still held up as the epitome of a fantastic ’80s treasure hunting adventure.

We chatted throughout the film. We weren’t missing anything, we had already seen it several times in our lifetime and could quote it like any child who grew up in the ’80s. We had a long discussion about how the film didn’t have a sequel (yet), and what would it entail if it were to go into production. We pitched around the idea of the cast of The Goonies reuniting as adults to embark on a new journey, or a more likely scenario of The Goonies children going out on a similar journey to their parents.

That’s when I chimed in:

“Guys. There was a Goonies II. It was for the Nintendo.”

In 1987, Konami had developed and published a direct to video game sequel of the Goonies for the Nintendo Entertainment System (NES). Ma Fratelli had broken out of jail and her first act of revenge was to kidnap all of the kids from the Goonies and lock them up inside her hideout. The only one who managed to escape her dastardly plan was Mikey, and it was up to him to find and free all of his friends – Including their long-time BFF, Annie the Mermaid. I don’t know who she is or where she came from, it’s not going to be explained, but apparently Mikey and the Mermaid are madly in love.

The gameplay for this is actually very interesting. Most of the levels follow a Metroidvania style, allowing Mikey to explore multiple worlds by jumping and climbing his way through a barrage of enemies. Similar to games like Metroid, Castlevania and Legend of Zelda, he needed to collect a certain number of items that would allow him to access new areas.

The more interesting components of the gameplay are the first person levels that reminded me a lot of the NES adaption of Friday the 13th. Luckily, there is no unstoppable Jason Voorhees to make these sections impossible – no, these are difficult for a whole different reason.

Each one of these first person perspective areas require the player to solve “puzzles” in order to move forward. I use “puzzles” in quotations because really it’s a matter of deciding which precise part of the room to knock on with your fist or a hammer to make additional doorways or holes to appear. Some of these sections also have a safe with tips in them, but I wouldn’t recommend wasting any of the precious keys you need to save The Goonies on hints because we have the internet and we can just google that information.

There was one particular sequence that was completely ridiculous in which Mikey had to bang a hole into the ceiling with a hammer, use a ladder to climb up into it, punch an old lady in a face for an item, then climb back down into the original room to talk to a magical wizard that would teleport Mikey to a different part of the hideout. Yes, there are wizards in this. Also, a magical superhero called “Konami Man” who refills Mikey’s health.

The level design is very similar to The Goonies film where the player navigates Mikey from the Fratelli cabin down into the depths of the caverns deep below it. I felt like this was a fairly well captured translation of the film’s locations into a 2D environment. My only critique is that we never get to visit One Eyed Willy’s ship. Considering The Goonies left all of the treasure behind with the ship, you would think they would at least make the sequel video game go back and recollect all of the lost treasure. Nope. We’re helping a sexy mermaid instead.

This game can be relentless toward the player if they don’t know where they are going in each level. I had played this game many times before, but hadn’t completed it because I just didn’t know where to go or what part of a wall to punch to make an item appear. I used a walkthrough on the game this time around, and I recommend any new players to do the same, because you will lose a lot of time and lives trying to play this game without one. Games like Metroid and Castlevania, which are also maze-like in nature, at least have a path and obvious points in which you can use a newfound power up to move forward. The Goonies II has nothing of that nature, and it doesn’t help that whenever the player walks through a door, they wind up on a reverse map called “Back of the House.”

The other problem with this game is that some of the enemies are too difficult to defeat or even avoid. I can’t count how many times a bat would fly at me and knock me off a ledge because I couldn’t evade its attack. Even with powered-up weapons like the boomerang, it would still require to hit an enemy 15-20 times without an explosive. Also as far as I can tell, the keys needed to unlock the Goonies generate completely at random, which adds another layer of unnecessary difficulty to this game. Luckily, the walkthrough showed me where I could find the base keys so I didn’t wind up stuck at any point during the game.

Is this game fun? I would argue “yes.” Playing it as a kid meant hours of endless exploration, and that can be fun for a video game. As an actual game to complete? Well, I think I am good on doing it this one time. It’s really honestly too difficult to invest that much time into the game, and I spent a lot of the later levels cursing at my screen because the enemies were generating at random with no pattern.

That being said, I could walk around for hours listening to the 8-bit remix of Cyndi Lauper’s “The Goonies ‘R’ Good Enough” for days.

The Goonies II (NES)
Is it good?
The Goonies II honestly is not a bad translation of a movie to a game. While it is not following the events of the film, it does provide the player with the ability to explore the areas that the Goonies did. The gameplay is actually fairly well designed, but it could spare to have some more direction. There are only so many hours someone can invest running around caverns and banging on walls. But hey, 8-bit Cyndi Lauper for days, right?
8-Bit Cyndi Lauper
Well designed Metroidvania levels
We get to explore and interact with the world that Goonies did, and that's awesome.
Too many enemies spawning at random.
No real direction to go in the game, to the point where it's frustratingly difficult.
Wish we could choose between the other Goonies kids as I freed them.
6.5
Good

Final Fantasy VII: Remake is impressive, even if you’re new to the series