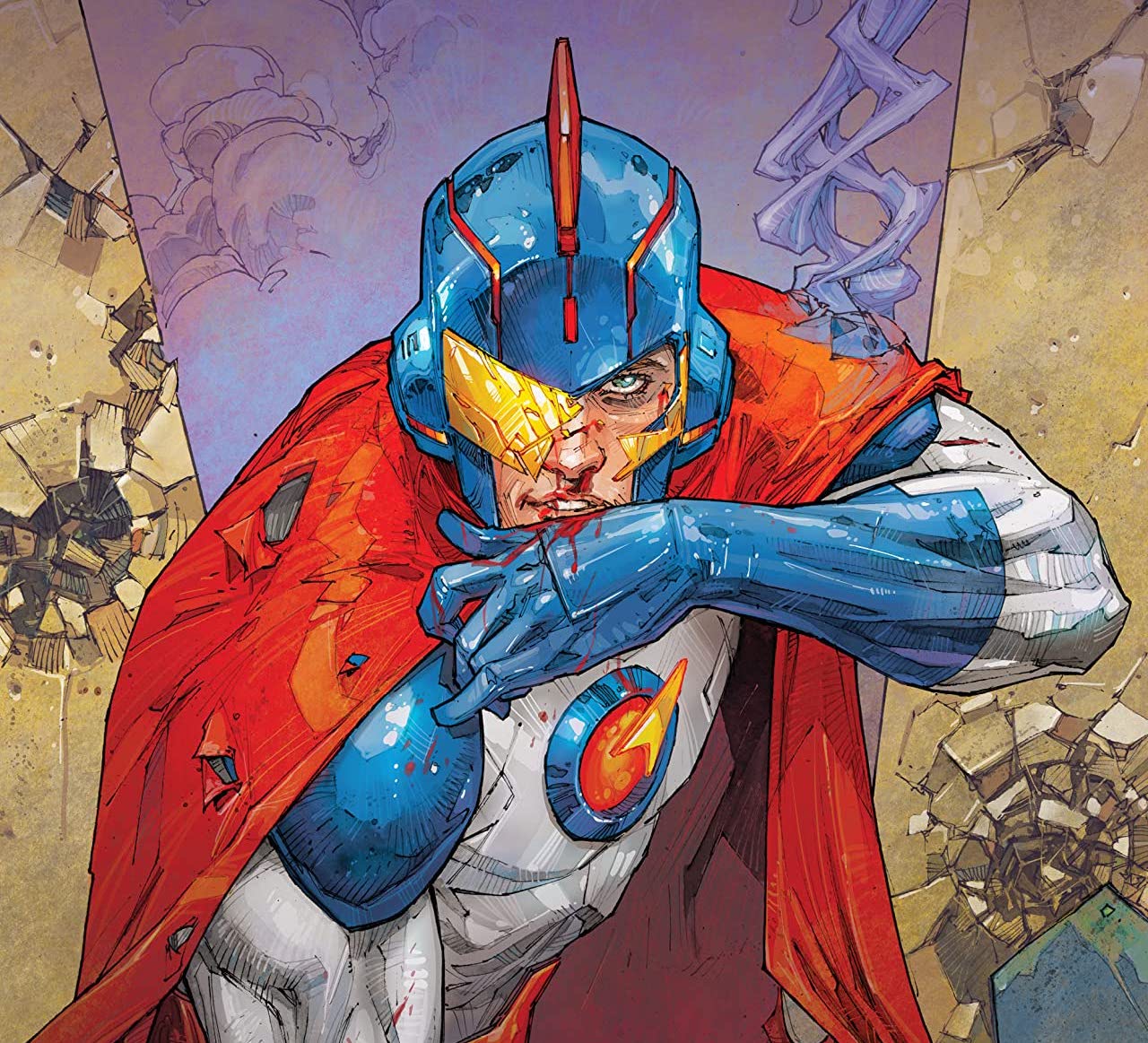 Before issue #3 hits shelves on June 24 (check out the preview if you haven’t by now), we touched base with Arbona and Towe to discuss the series. The pair also address writing for a miniseries format, who they would cast in a movie adaptation (and for that matter, who Wizard magazine would cast in 1994), and a literal treasure trove of potential crossover opportunities.

AIPT: Thanks for taking the time! First and foremost, how are you holding up during this pandemic?

Alejandro Arbona: Thank you for asking! I’ve been doing fine, although of course, that comes with a big asterisk. I’ve been really lucky to stay healthy. It’s just been a lot of anxiety and difficulty to deal with, which definitely applies to all of us. But we have a figure of speech in Puerto Rico, about contributing your own little grain of sand, and I really hope that’s what Doctor Tomorrow can be. A little grain of sand for entertainment during your stay at home, a tiny bit of positivity against all the despair. It’s an uplifting comic book by the end, and getting to see new pages from Jim closing in on the end of the story, at this point during quarantine, was a real boost of good cheer for me.

Jim Towe: Hi Dave! It’s definitely been a rollercoaster these past couple of months, but I’ve been holding up well. Hope everybody out there’s been able to stay safe and healthy.

AIPT: For readers unfamiliar with Doctor Tomorrow, what’s the hook for this series?

AA: A teen boy named Bart suddenly meets himself as an adult, from a parallel universe. He’s amazed to discover that his future self is a superhero called Doctor Tomorrow, who gives Bart a flying suit and asks for his help to stop a super-villain before he can destroy this universe. Now they’re in action side by side, and Bart gets to see the man that he’s destined to become. Without giving away too much, we’re trying to make Doctor Tomorrow an unexpected new take on a very classic and timeless kind of comic book. We’re trying to come up with a fresh and unusual story about a character becoming that aspirational kind of superhero, a role model with a strong moral compass who we can see the best of ourselves in.

I know that’s very vague, but the story is predicated on some huge spoilers that are coming up. You’d think when we’re three issues into the series, and I’ve already written all of it and outlined a sequel, that I would have mastered the brief elevator pitch. But when I proposed the initial idea to Valiant, and when I’ve told people privately what it’s about, the hook I always tell them is actually what happens in issue 3. So this is it, finally! Doctor Tomorrow #3 is the beating heart of the story, it’s the backbone, and it’s when the central theme opens up.

JT: Issues one and two really take us towards an enormous conflict between Doctor Tomorrow (and all of the Valiant heroes I could fit on the page) against Hadrian. We kicked off the series with how apocalyptic things can get when these two heavyweights clash, and now we get to see a rematch with (hopefully) a different outcome. Personally, it’s been my favorite issue of the series to draw!

AIPT: It’s all-out war in Doctor Tomorrow #3 (preview is on AIPT). How does the creative fight scene process work between you Alejandro and Jim? Do you write up each punch, or is it more fluid than that?

AA: I would say it’s a little of both. I’ve been scripting out all the action play by play, but my imagination doesn’t count as a comic book. It isn’t actually authored until Jim draws it. There are always different and better ways for Jim to create the stuff I’ve only imagined, and to create ideas of his own. And then a lot of times, after seeing the art, I’ll go back to the script and rewrite, modify, add dialogue, cut dialogue, all sorts of changes to bring the plot together, hopefully meeting its greatest potential. The result after that part of the process is always much better than how it started out in the script or as a half-baked idea in my head.

JT: What definitely made this issue so much fun to draw was the fact that, visually, it’s almost entirely made up of action sequences and big moments with tons and tons of Valiant characters. Choreographing an issue like this is similar to putting together an elaborate jigsaw puzzle, just with how many moving parts are involved. Once everything’s in its place, its a matter of making sure to deliver as much impact and energy into the characters as possible.

AIPT: Was this always pitched as a miniseries? Is there any room for another story arc?

AA: This is definitely a mini-series, for reasons that will become obvious to the reader by the end. That was the pitch. But the pitch was also to establish Doctor Tomorrow as a new ongoing character for the Valiant Universe coming out of this. Like the man said, “Every new beginning comes from some other beginning’s end.” (That was either the philosopher Seneca or the band Semisonic. Your choice, reader!) But yeah, this story wraps up tight…and then it plops a new status quo on the table, ready to launch into a whole new adventure. We’ve been discussing a big sequel for quite a little while, so hopefully we get to tell that story soon after this.

AIPT: When creating a time travel story how much research goes into making the science sound and look real?

AA: I’ve always been a huge fan of this type of science, so I did tons of research. And then when we started crafting the story, I threw all of it away. I only kept the bits that prop up the fiction. In Back to the Future, Doc Brown shows Marty the flux capacitor and says, “It’s what makes time travel possible,” and that’s all the explanation you get. (There’s also a part where Doc says the DeLorean’s stainless steel body is more conductive for “flux dispersal,” but that’s not to explain how time travel works so much as it’s there to justify why the movie features a DeLorean instead of, like, a Subaru.) So there’s actually a lot of real, albeit theoretical physics in this story. Dark fluid that has negative mass is a real concept. Theoretically, you CAN create it in a superconductor with lasers, and theoretically, it could destroy the entire universe instantly. Dark energy pushes gravitational waves across deep space, and gravitational waves theoretically cross into parallel universes.

Don’t fact-check me on any of this stuff, because I barely understand it and I probably got some of that wrong. But those little details are enough to spark a story. Any more hard science than that, it becomes extremely complicated and, in my opinion, unnecessary. It can bog down the story, or at least the dialogue. Instead, we tried to chip away at a lot of that complicated stuff until all that was left was a glowing nugget of pure entertainment.

JT: Alejandro’s tasked with the heavy lifting in this department. But honestly, Alejandro is always great with providing reference and detailed info on the science and tech we use in the series. From there, I just try and make the science stuff look cool!

AA: Blergh, I wish I had a reliable trick. The only thing that really works for me is to take care of myself and treat myself as decently as I can. It’s not an exciting answer or a clever life hack. If I brush my teeth and go to bed at a reasonable time, sleep eight hours, make a good breakfast and coffee, water my plants, and take my dog on a pleasant walk, I might have a productive time for the rest of the day. If I get drunk, stay up till three staring at my phone, and wake up all dry-mouthed with my head foggy, that whole day is basically ruined, I’ll never be able to fully concentrate. There might be work that can be salvaged, but it won’t be my best. The system isn’t a hundred percent, because things outside my control can always sucker-punch me with an unmanageable amount of anxiety, but when you work from home and you’re trying to cope, those healthy routines keep trouble at bay.

JT: I’ve always had two avenues to go down when I need to get back into the hang of things artistically. One way is to just jump in and draw something for yourself. It helps me reconnect to the craft, and reinforces why I wanted to pick up a pencil in the first place. If that doesn’t cut it, I paint. Working almost exclusively in black and white art for comic books, painting is a scratch I rarely get to itch. I’ve never been able to invest much time into it, so whenever I get a chance to revisit painting, it feels like a brand new experience and helps recharge the art batteries.

AIPT: I have to ask: Vin Diesel is clearly Bloodshot, so who would you want to play Bart (young and older actor must be chosen!)?

AA: Wizard magazine in 1994 would say Jonathan Taylor Thomas for the young Bar. And for the adult Doctor Tomorrow, unless he’s tied up playing Captain America at the time of shooting, Raiders defensive end (and up-and-coming movie star) Howie Long. So let’s go with them!

JT: Bart would’ve been the perfect character for Jake Lloyd and Arnold hot off the heels of Jingle All the Way. “It’s Tomorrow Time!”

AIPT: What did you want to be when you were little?

JT: Primarily a dinosaur, but also a comic book artist. Maybe both at the same time.

AIPT: Doctor Tomorrow seems like the perfect hero for a crossover, is there any characters you’d like to crossover with Doctor Tomorrow from any publisher (did I catch a Solar reference in the issue #3 preview!?)?

JT: There is only one. Marvel Comics’ Doctor Yesterday, of course.

‘Decorum’ #2 review: not for the impatient