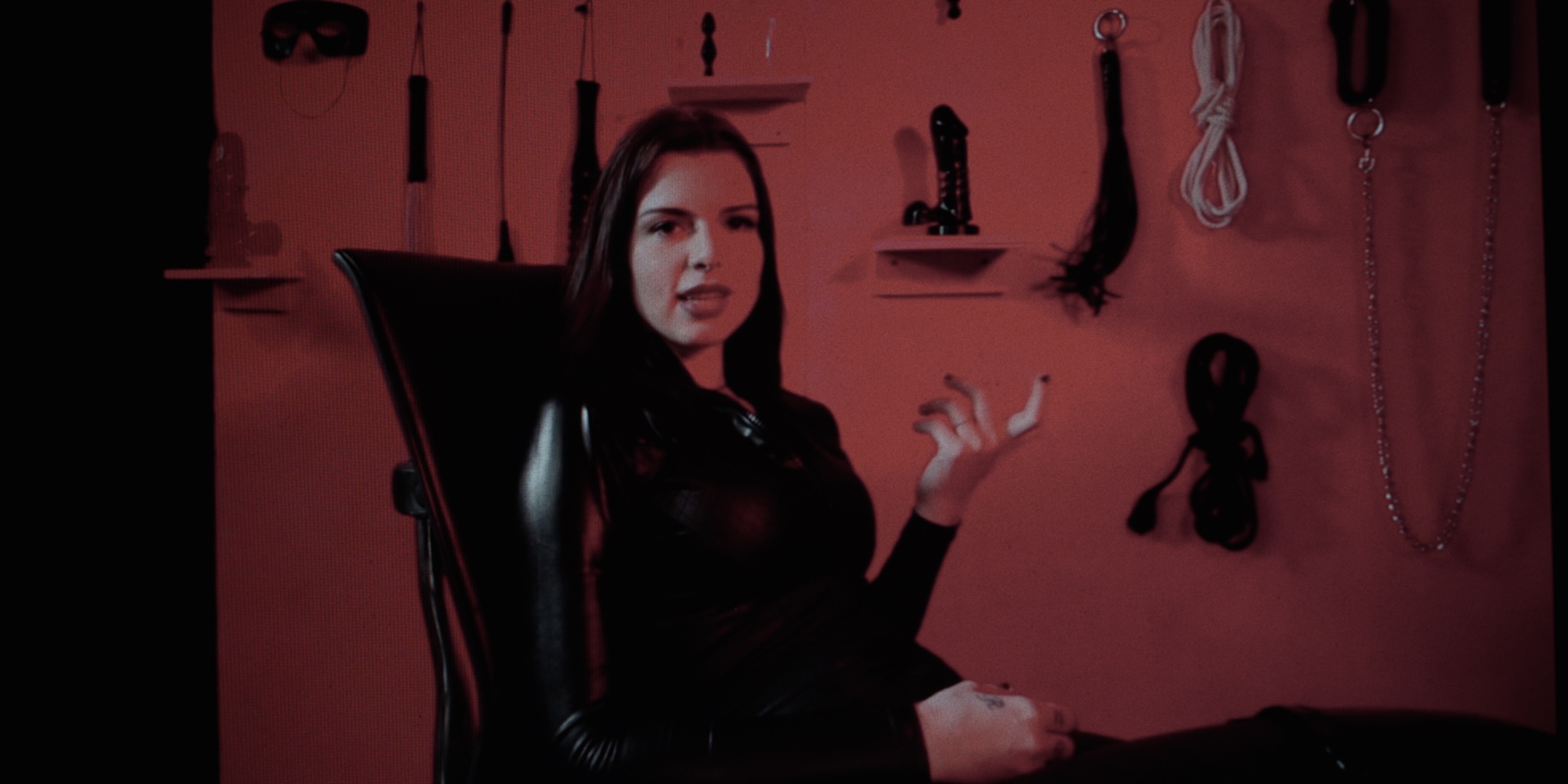 PVT CHAT follows Jack in a growing obsession with Scarlet, a cam girl he meets online. Jack makes his living playing blackjack online; he lives in an apartment by himself, where his landlord won’t renew his lease because he always pays late, and he sleeps on a mattress on the floor. He wears the same hole-y sweater everywhere he goes, and has ramen noodles and beer for dinner every night. He spends a lot of time flipping a coin outside a massage parlor, deciding if he should go in or not.

We’re able to get into Jack’s head a little bit as we see him go about his day to day, thanks to the close-up shots director Ben Hozie focuses in on Jack’s face with. Jack’s life revolves around his fantasies, which become obsessions. He tells some guys he meets that they call him “Blackjack Jack” because of how good he is at blackjack; he tells Scarlet that he works in tech as an app developer. He lies with an ease that indicates he might really believe what he’s saying.

The close-up realism of the camera work adds to the suspense, as we watch bad ideas in action. Some of these ideas are tough to watch, like when Jack tries to help his friend Will get enough money (by playing blackjack) to pay for his son’s college tuition. A lot of the tense moments in PVT CHAT are also really funny — there’s a dark humor underlying, as we hope that nothing bad will happen, but it might be funny if things did go sideways.

While at first Scarlet wants to maintain solid boundaries with Jack, when he tells her that he’s an app developer, she starts to loosen up and let her guard down. While at first she maintains her carefully crafted persona and won’t let Jack know the real her, between Jack’s unrelenting attention (and money), she starts to let him in a little bit more. When we form relationships online, there’s a bit of mystery in whether or not our expectations will line up with reality once things enter the real world.

As Scarlet’s boundaries with Jack begin to break down, we start to see her off-cam too. The audience gets to know more about Scarlet and her real life, but we don’t get inside her head like we’re able to with Jack.  When Jack thinks he sees Scarlet one night, he follows her. It’s more than just a little creepy; when Scarlet starts to let her guard down, you can’t help but feel worried for her.

PVT CHAT is an exploration of how we can get carried away by fantasies, and how these fantasies can go all wrong when they cross the line into obsession. It’s relentless in its tension, like Uncut Gems. There are a lot of parallels between the 2019 film by the Safdie brothers and PVT CHAT. There’s the uncomfortable suspense of watching someone with a gambling addiction in action, and the grimy realism that feels true to both New York City and to the film’s subject matter.

Unlike Uncut Gems, though, PVT CHAT maintains a sense of lightness despite the dark subject matter – yes, Jack’s obsession is creepy and potentially dangerous, but rather than entering dangerous territory, it goes in a surprisingly different direction. There could be a cautionary tale in PVT CHAT about what happens when the lines between internet/fantasy and realities are crossed, but instead the film is genuinely fun to watch. Whether this is a good thing or not is hard to say; in some ways, it seems like the film makes light of the real dangers women often face at the hands of men.

Julia Fox is brilliant as Scarlet – both commanding and coy, making the best of her character. Scarlet is an object of fantasy, and she’s good at playing that role, until she starts to let Jack in to her real life. PVT CHAT plays out like it’s keeping the fantasy alive off-cam; it’s unrealistic, and sends a potentially harmful message. If you can put that aside though, it’s an entertaining film.

The dark sense of humor that defines PVT CHAT is still effective even in the most sexually explicit scenes (which there are a lot of). Peter Vack is excellent as Jack; he’s an unsympathetic character, and he’s got quite a few cringe-worthy scenes that he somehow manages to play naturally, with an air of grace. PVT CHAT might not reach a large audience due to the nature of the content, but the playfulness that the subject matter is handled with makes for a unique viewing experience.

‘PVT CHAT’ review: Sexy thriller is actually really funny
PVT CHAT
'PVT CHAT' is a darkly humorous exploration of how we can get carried away by fantasies, and how these fantasies can go all wrong when they cross the line into obsession.
Reader Rating0 Votes
0
Julia Fox and Peter Vack give excellent performances.
Manages to be stressful and cringe inducing, but still funny.
Unexpected and unique story telling.
At 86 minutes long, it's quick suspenseful journey.
Julia Fox's character is just an object of obsession, not a fully rounded out human being.
While shot with a sense of realism, there's nothing realistic about the majority of the plot.
7
Good