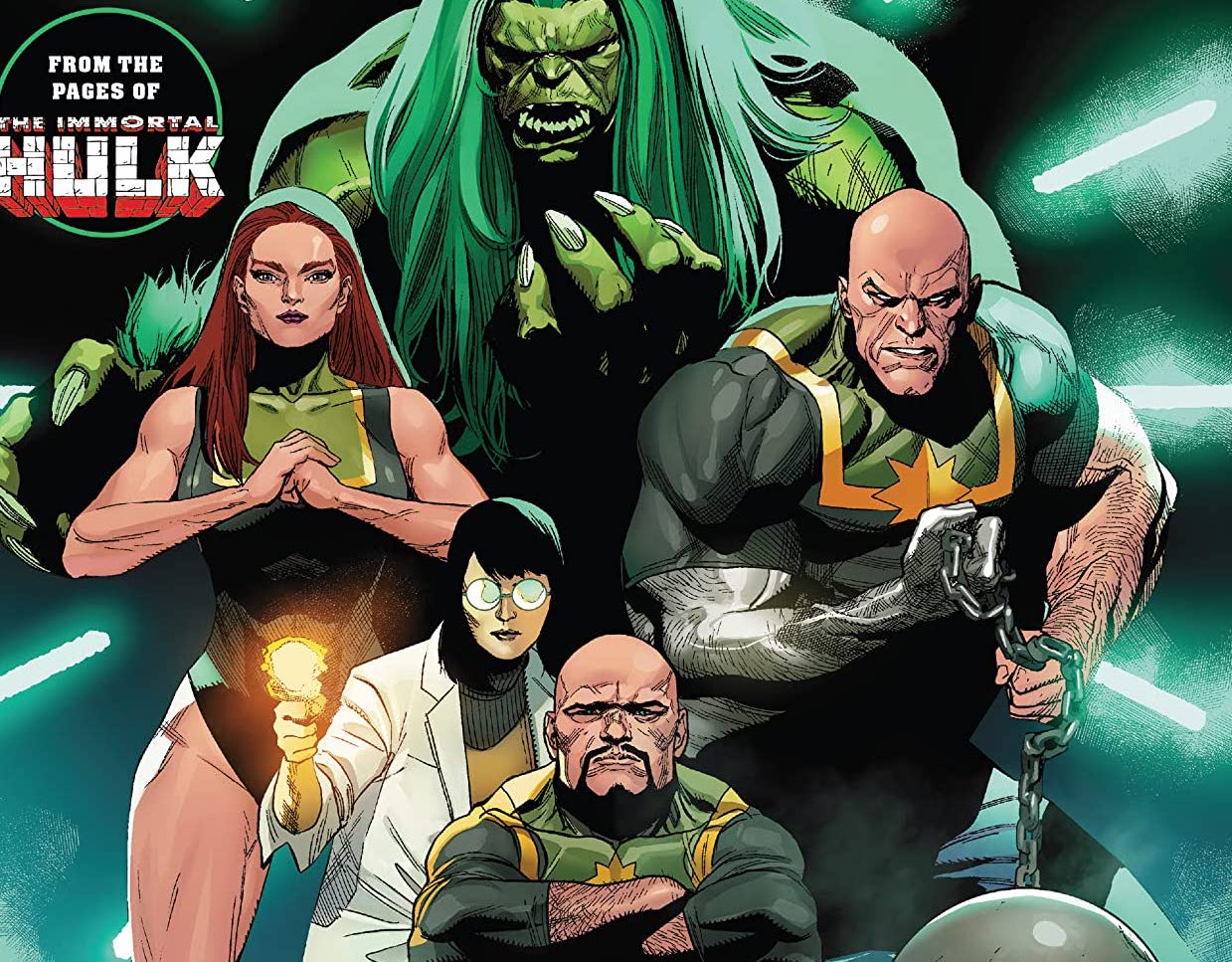 Spinning out of the recent events of Immortal Hulk comes a brand new mini-series, Gamma Flight. This time, Al Ewing, the mastermind behind the Hulk’s latest era, teams up with a fresh creative lineup to focus more on the side characters from his run. This five-part miniseries seeks to take Immortal Hulk‘s supporting cast and give them their own time in the spotlight. But does the debut measure up to its mainline predecessor?

The issue opens on our ragtag team reeling from the events of Immortal Hulk #47. Now on the run from their previous employers, the newly christened Gamma Flight seeks to find their place in the world. This offers a much more intimate look at the characters that have taken a backseat to the main narrative. It’s fun to see this unlikely grouping of characters work together and butt heads while also expanding the scope of the Immortal Hulk arc.

The main heart of the issue lies in the character interactions. Up till now, the majority of these characters have been defined by their place in the Hulk’s story. Now removed from the main book’s driving plot, these characters are forced to stand on their own. Whether it’s Creel and Samson arguing in the middle of a mission or Puck and the merged Rick and Del playing video games back at their base, being able to see the characters inhabit their own place in the world remains a charming change of pace.

However, despite the engaging character work, the central plot remains rather average. No one will be surprised to find the driving plot point centers around gamma mutates running amok and our team going to sort it out. It comes off more as just an extended B-plot from the main book instead of forging its own path, which could be all the series aspires to be. It just becomes disappointing to see such captivating characters embarking on an adventure we’ve seen before.

When it comes to the line art, the style conveys the story well. One can immediately tell it is trying to mimic the Joe Bennett’s style from the main Hulk title, which is not necessarily a bad thing. There are unique paneling choices that keep the reading experience fluid and engaging, alongside creating compelling action sequences.

Unfortunately, the art falters when it comes to the coloring. With so many gamma-mutates and the team’s bright green costumes, the issue contains a highly saturated color palette. However, towards the end of the issue, the color saturation drastically drops out of nowhere and leaves the art looking muddy. Perhaps this was done for dramatic purposes, but it ends up being more distracting than effective and does not help the story being told.

All in all, Gamma Flight #1 delivers a middle-of-the-road debut. The character work is fun, but the plot direction is something we’ve all seen by this point. This paired with a solid art style marred by distracting coloring choices makes it all the more middling. This series might be worth picking up for current Immortal Hulk fans who can’t get enough of the series before it ends; however, for the average comic fan this debut will not do much to attract interest.

‘Gamma Flight’ #1 delivers extraordinary characters in an ordinary plot
Gamma Flight #1
All in all, Gamma Flight #1 delivers a middle-of-the-road debut. The character work is fun, but the plot direction is something we've all seen by this point. This paired with a solid art style marred by distracting coloring choices makes it all the more middling. This series might be worth picking up for current Immortal Hulk fans who can't get enough of the series before it ends; however, for the average comic fan this debut will not do much to attract interest.
Reader Rating1 Vote
8.2
Fun character moments.
Creative paneling and fluid action.
Distracting shift in color saturation
Central plot something we've seen before
Feels like an extended B-plot from Immortal Hulk instead of its own series.
6
Average
Buy Now
Comixology/Amazon