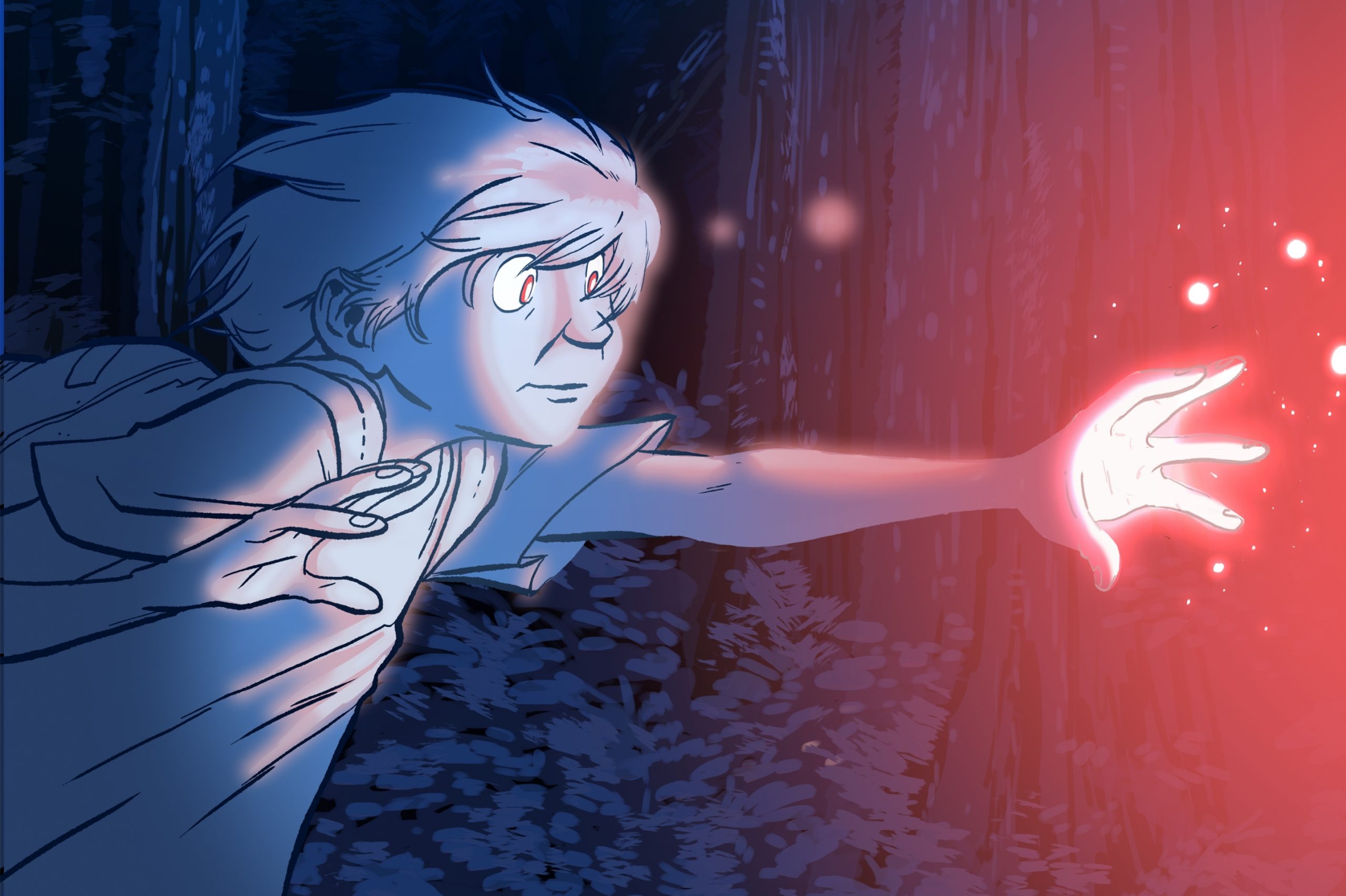 If you’re a fan of fiction for the YA or adjacent crowd, you may already recognize Mike Holmes. He’s been the artist for several well-received series, including Wings of Fire and Secret Coders. Now, he’s gone solo with a brand-new graphic novel appropriately titled My Own World (in stores now via the Macmillan Children’s Publishing Group).

This “memoir-inflected fantasy” follows nine-year-old Nathan, who travels to a slightly mysterious lighthouse when his family life becomes uncertain. While there, he goes on adventures “across seas and through the air, with new extraordinary friends of his own creation.”

For a deep dive into the book, we recently touched base with Holmes via email. We discussed, among other topics, pulling from his own life as inspiration, some of his favorite fantasy properties, and his unique artistic choices.

AIPT: What’s your elevator pitch for this book/project? Do you think it’s all like “X meets X”?

AIPT: What is it about the YA/middle school audience that is so appealing to you as a creator? Do you feel like you’re shaping the interests of this younger crowd, or that there’s just not enough options for this audience?

MH: It definitely feels like the middle grade audience has more options now than I ever did! I wouldn’t even know how to begin shaping anyone else’s interests — I’m really just glad I have this opportunity to talk about my own interests, anxieties and joys. I’m mostly asking if anyone else feels like I did, and like I do.

I’ve enjoyed making books for this particular age because I remember it as such an extraordinary time in my life. My ability to recognize my own feelings was still developing; I had a greater sense of what my world was like, and was beginning to sense what other people’s worlds were like as well. It’s a lot to take in and quite overwhelming, and it only gets more intense as you enter adolescence. You’re at the top of the roller coaster, and it can help to have someone there on the ride to tell you that you’re going to be okay.

AIPT: This book’s described as your solo debut. What’s it like going it alone? And what’s it like balancing the work of both writer and artist for a project?

MH: It has forged in me an immense and irresponsibly unchecked sense of power that has destroyed my ability to relate to others.

OK, but really, it’s what I’ve wanted to do for a long time. I do my best to not speak off-the-cuff when I’m feeling emotional, and there are so many feelings tied up in this kind of expression. So I wanted to mull it over until I was ready to say something. For years I got to speak through my drawings, using someone else’s script. Going it alone is terrifying, but the opportunities far outweighed the risks. The real joy has been shaping the story, the pacing, the big and small moments and knowing that it’s all my own tastes and ideas brought forward, with no safety net. That was exactly how I wanted it.

AIPT: What are some other books, films, shows, etc. that influence your overall approach?

MH: How many characters can this interview be?

I’ve spoken about Michel Rabagliati as a major influence — the way he speaks about his experiences through a surrogate character completely reframed the kind of story I thought I could tell. Growing up, there were quite a few books that had an impact – Judy Blume’s Tales of a Fourth Grade Nothing, Johnny’s in the Basement by Louis Sachar, almost anything by Gordon Korman or Farley Mowat (Canadians represent) — well-observed stories about kids whose lives did not seem that different from my own. I learned to read at three years old, and that meant I spent a lot of time with books.

And then there’s movies, my primary passion. The 1980s were jam-packed with stories about, again, normal-seeming kids. But in the best movies, the characters also lived in a world where magic (or something equivalent) existed – E.T.; The Last Starfighter; Explorers; Honey, I Shrunk the Kids; The Boy Who Could Fly; Flight of the Navigator, and countless others. These were stories filled with special effects where I could easily project myself into the adventure. The movies of the time were incredibly good at reflecting a kid’s fears and hopes; I felt spoken to in a way I hadn’t before. There have been a few movies since that captured that same feeling – The Iron Giant and Zathura are two great examples.

Hayao Miyazaki, however, is unmatched – his ability to understand a child’s emotions while surrounding them with the most imaginative and otherworldly situations and characters is incredible. The way he has his protagonists explore their worlds — everything is so tactile, every experience is savored — has been an unquestionable influence.

AIPT: The book, at least in part, is based on your own experiences with family, bullies, grappling with loneliness, etc. Is it hard to be so open when dealing with such intimate topics, and how do you balance the ratio of real-life and fiction?

MH: They’re personal, for sure, but not so intimate that they’re not worth bringing up – these are issues that everyone deals with to some degree. I used my own experiences as a springboard; there’s a pattern to how we react to things that lends itself to a narrative, so my own truth helped serve the fiction as I told the story of how Nathan deals with problems.

AIPT: One thing I really liked about this book (aside from many other things), is that you leave it fairly open regarding what’s real and what’s not. Was that purposeful at all, and do you want the reader to take more of an active role?

MH: I wanted a world where magic was real. I’ve never been a fan of pulling the rug out from a fantastical experience with the “it was all a dream” kind of twist — for me, it undercuts the specialness of the tale. But that’s my take on the story. We all filter stories in our own way, and ambiguity can be intriguing; if a reader believes that it wasn’t real, that’s certainly an interpretation they are free to make. I’d never want to tell anyone how they should experience a story, regardless of my intent.

AIPT: There’s this great balance of really huge shots or scenes and then lots of intimacy and details and close-ups. Does that approach have some kind of larger meaning, or does it speak to something else about the story itself?

MH: Speaking as someone who’s always had the itch to make movies, I look at comics as an incredible outlet for those impulses. Want to go big, show an exploding volcano or a kid in a stealth fighter bearing down on a metropolis? Budget is no object. Want to capture small, complicated feelings, maybe pull back the veil on a chaotic household or crawl inside a kid’s head? No crew required, just the desire and confidence to follow through on your ideas. This kind of creative freedom that comics provides is kind of what Nathan’s story is about.

Once we get an idea of what Nathan can accomplish without creative boundaries, we can see the scope of his nine-year-old imagination, and that was a massive reason I was excited to tell this story. But none of that would mean anything unless we saw all the ways Nathan felt closed in and cut off. Nathan is forced to deal with loss, as we all are, and sometimes when we don’t have the tools to deal with it we go to extremes, either inward or outward.

AIPT: Is there anything specific from your past books, like Wings of Fire and Secret Coders, that you took into this book? Or that shaped your approach and artistic decisions?

MH: Every book I work on is like taking a class — I’ll push myself to find new ways of saying or showing something, so in that way they’ve all helped me get to this point, and I really look forward to making more stories and seeing what else I can tackle.

The level of emotion present in My Own World was made easier by working in the past with writers who wrote terrific, emotive characters. I love drawing expressions and gestures, and I’ve found Wings of Fire to be especially challenging. But that learning curve was incredibly helpful, and I’ve got a lot more confidence in my work as a result.

AIPT: How much of this book is just for kids and how much could it be relevant to adults? I think the best stories can obviously span generations, but I know some creators prefer to speak with or engage a specific audience?

MH: I have a lot of respect for kids — they go through a tremendous amount in a very short time. It’s important that I do my best to reflect how I really felt, to try to capture a degree of authenticity, because the stories that made me feel understood were the ones that meant the most to me.

We were (or still are) all children, and we carry those years with us throughout our lives. If I can look back and be honest about my feelings, then I imagine there are other adults out there who will also find something for themselves in My Own World.

MH: It’s relatively light, fits in most pockets and is affordably priced. Once you get past those hurdles, I really think you’re going to enjoy that you took the time to read it. Maybe that’s just a fantasy of mine. Still, it’s a nice one.

‘Marvel-Verse: She-Hulk’ is a good taster for new readers