This year has wound up being a Spider-Man renaissance for me, and I can think of a few different reasons. First, likely the least significant, and most recent, is the announcement of Penguin doing a Penguin Classics line of Marvel comics, one of which will be classic Amazing Spider-Man. While I think it is interesting that Penguin acquired the distribution rights to Marvel comics and then decided they deserve special distinction, it holds some meaning to me that these comics will sit aside so many classics on Barnes & Noble shelves, and bear that Penguin symbol of esteem.

The hype for No Way Home has also steadily built up across the year, which has had a larger effect on my Spidey enjoyment than the above has. I’m still not sure the film will be good, but it is pushing me to watch a bunch of Spider-Man films from across my life, and I’m even excited for the bad ones!

Lastly though, is, on its surface, probably the thing that seems the most separated from enjoying actual stories featuring Spider-Man, but for myself, is one of the most consequential experiences I have had with a fictional character or franchise: the LEGO Daily Bugle. 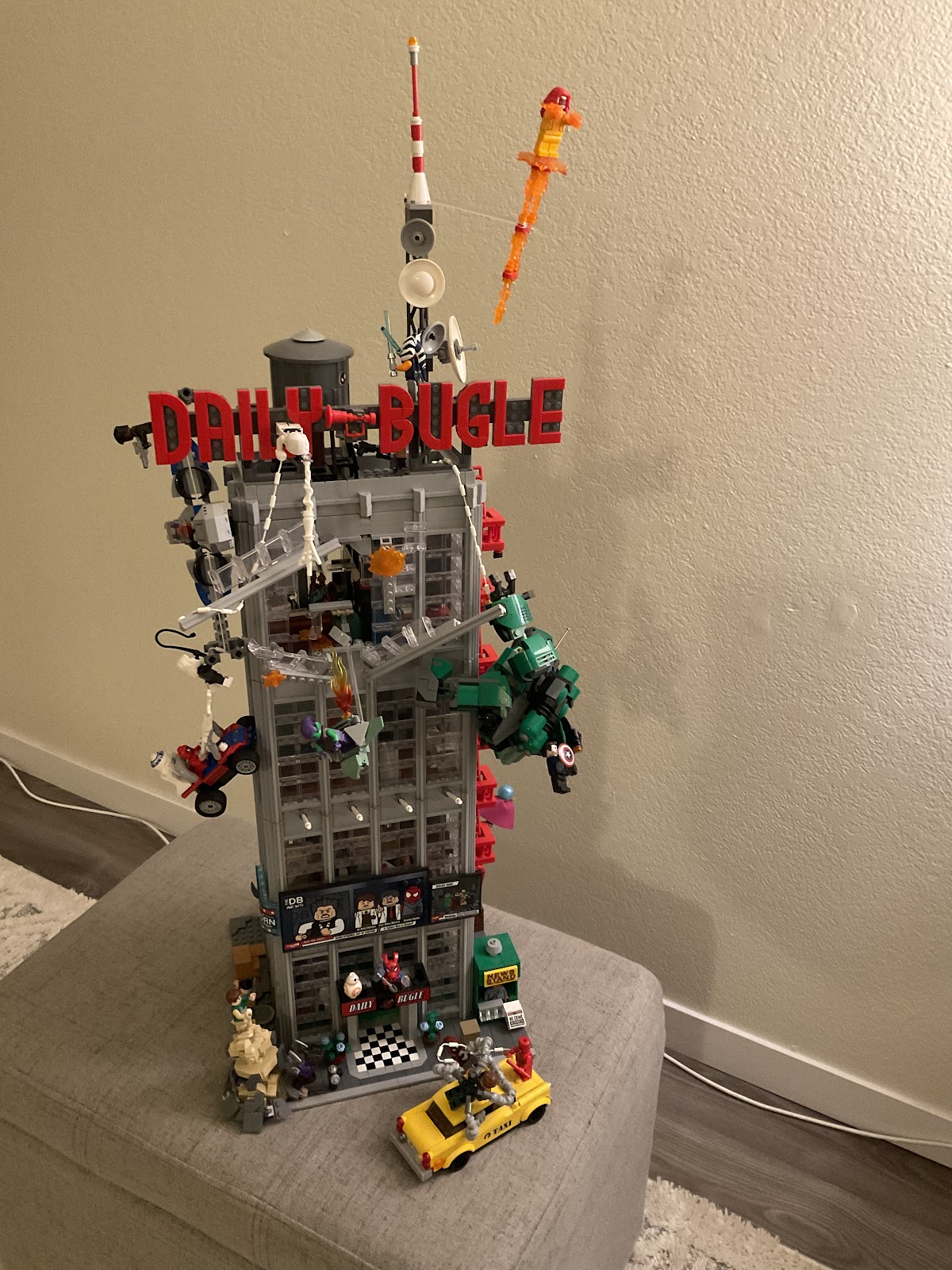 Part dollhouse, part obsession with buildings, and part Spider-Man, this toy sparked my Spider-Man renaissance, along with a LEGO one, as can be seen by the X-Wing on the left, the Steve Rogers Mech on the right, the Ahsoka up top, and the tiny T’Challa Star Lord at Sandman’s “feet”. All of this is to say that this toy has pushed me to be more creative this year, and much of that creativity has gone directly into enjoying more Spider-Man stories, including Mighty Marvel Masterworks: The Amazing Spider-Man Vol. 2.

Up to now, I think this volume of comics is the oldest comic that I’ve enjoyed this much, and while at least some of the blame should be given to the intangibles of this year, it is also full of great issues, and great creativity overall. Highlights include Doc Ock in general, Spidey’s interactions with Johnny Storm, the issue where Peter quits being Spider-Man and Jonah gloats the whole time, and is generally a good time.

The above page is one that I found immediately striking, for a couple reasons. One is the choice of poses for Spider-Man to be in. They feel so weird, which is obviously purposeful, and emphasizes the fact that all of these images are mid-action. They feel less posed than many comics do, and instead feel like transitions between images and actions, doing a perfect job within a comic.

I also want to bring attention to the panel progression across this page, because I thought it was great, especially the bottom six parts of the grid. The storytelling almost feels needlessly complicated in the way it takes so much time to show Spidey going into a hole and springing out, which could more simply be done in two side-by-side panels. Instead, this six-panel sequence was made, which breaks down all of the actions and plays with space and timing to stretch out the narrative.

To me, though, the biggest draw this comic has is its cover art, illustrated perfectly by Michael Cho. This is the kind of art that I think Cho excels at, more than anyone else in the world. His work on the masterworks (along with his DC Golden Age covers) is the kind of work that makes me immediately feel like I’ve been pulled into the work, it has the exact vibe of it. It looks like it’s the way that Peter Parker’s memories are supposed to look, but almost in a more historically accurate way, less dreamy somehow.

Perhaps what I like the most about the cover is that it grew on me. Initially, I didn’t really like the amount of yellow in the piece; it felt at odds with the first volume’s cover, but also felt weird with Spider-Man’s redness dominating the image. I was, of course, wrong to question it, and especially so after reading it, as it feels perfect. I now look at it and see the teenage hero overwhelmed by the many faces behind him and around him. He kicks, not in control or out of triumph, but to escape, to get to safety. Incredible work, as always.

Mighty Marvel Masterworks: Amazing Spider-Man Vol. 2 is fun and entertaining with great art from cover to cover. It could use fewer words, but if you’re craving good Spider-Man before or after No Way Home, this will work beautifully.