The Ages of World of Warcraft
Advertisement

World of Warcraft is the most popular MMORPG of all time.

If you don’t play it yourself then you know someone who does. And you probably haven’t seen their actual face in a very long time. Who can blame them, though? In the real world, they might only be a 350-pound dishwasher — but in the magical world of Azeroth teeming with heroes, villains, massive structures, and wonders around every corner they are the 350-pound individual with no body fat, a legendary broadsword, throngs of admirers and a world class cook and tailor on top of it all. Oh yeah, and they sleep at night on a big pile of gold, with several beautiful Night Elves (if they visit Goldshire a lot).

As with many of the finer things in life (The Ages of Minecraft ring a bell?) however, the honeymoon phase doesn’t last forever. In the long, storied history I’ve had with the game ever since I first surrendered my credit card information to Blizzard, I’ve noticed myself and other experience eerily similar paths, or “ages” with the game. Which age are you in?

Your carefully molded toon has just materialized into the bright, shining, polygonal world clutching a gnarled wand or crude wooden buckler the size of a dinner plate and wearing nothing but scant rags. (But at least you got to pick your own hair color!) You look around and think, “God, they weren’t lying. This really is just a veritable world! Everything is so vast and sprawling. Where do I even start?”

You’re like an oversized infant, stumbling around, trying to get used to your own two feet. (And accustoming your fingers to keybinds.) A guy with an enormous yellow exclamation point hovering over his head in some sick parody of an angel’s halo gestures you over. He says he’ll give you a leather vest if you kill twenty wolves for him. What a nice guy!

You marvel at everything. From the way the afternoon sun glistens off the surface of lakes, to shadows scuttling over windblown grass, to the slashing rain, to the funny way your asscheeks shift when your character runs, to the wolves you must brutally murder for their pelts. The world is engrossing; everything wondrous, every little occurrence a miracle. And you haven’t even left the confines of your hometown/starting area! You plunge your envelope opener-sized dagger into a wolf’s ribcage for the thirtieth time, and when you pry it free, blood slathered and battered, (along with a few copper pieces) you feel something warm suffuse your tired body. A golden glow surrounds you. Holy crap, you just dinged! 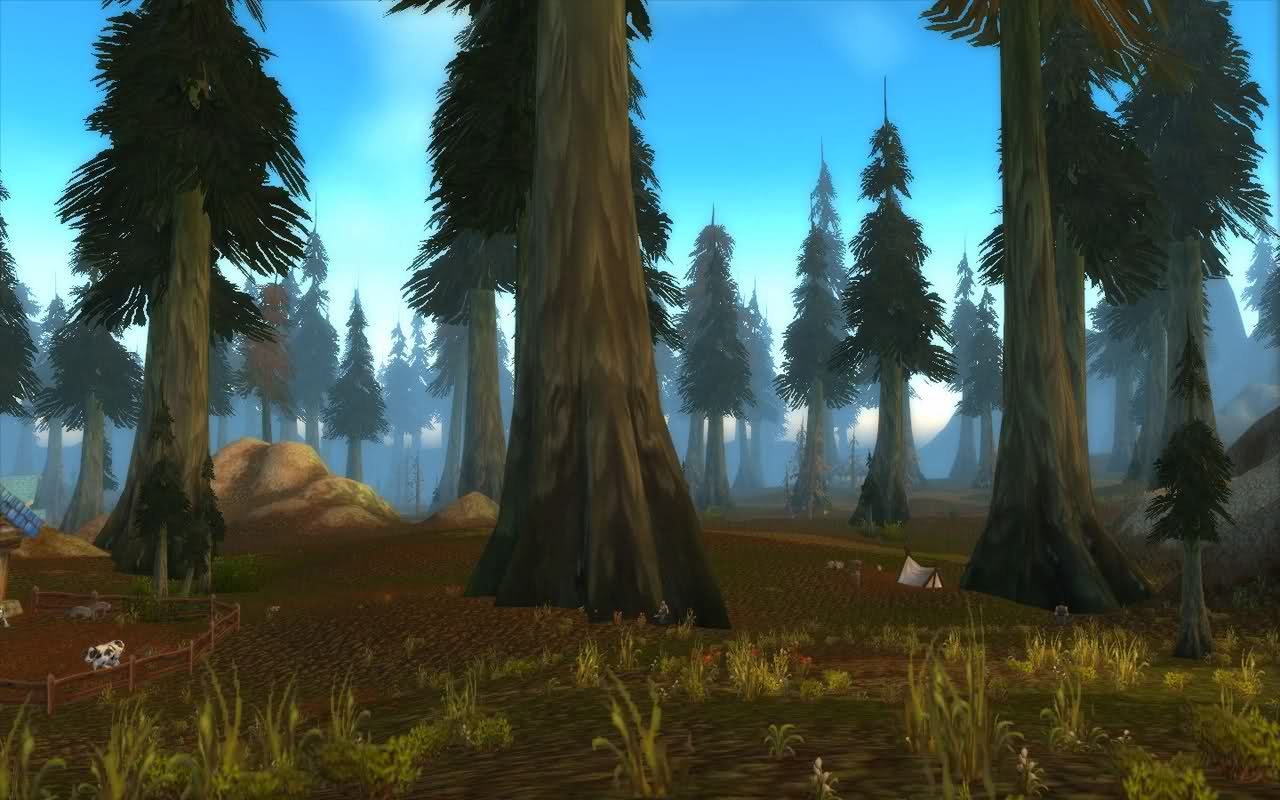 “Ah God, what a beautiful day. Can’t wait to get out there and get me some of that fresh, fictitious air!”

The Age of Learning (Or, the Interim Age)

One of your buddies just showed you how to catch the tram to Ironforge… but you missed the jump! Boy is your face red. Oh well, there’ll be another one along by the time you clamber back up to the gates.

You’ve found some weapons now that can actually break the slimed skin of your frog hominoid enemies and eventually slay them as opposed to cooling them off with a fanning breeze when you swing it at them, chipping away a mere health point at a time.

The stuff you’re wearing on the other hand still looks not unlike something a dwarven hobo stitched together by hand in piecemeal fashion just to keep warm by a trashfire near Dun Algaz; a sad, hodgepodge of perforated Viking helmets and incongruous slabs of sun-cured leather and chainmail, but hey, they’re better than nothing, right? You’re starting to figure out how to equip things that actually help you survive too. (Unless you’re one of those spoiled Bind on Account jackanapes.) 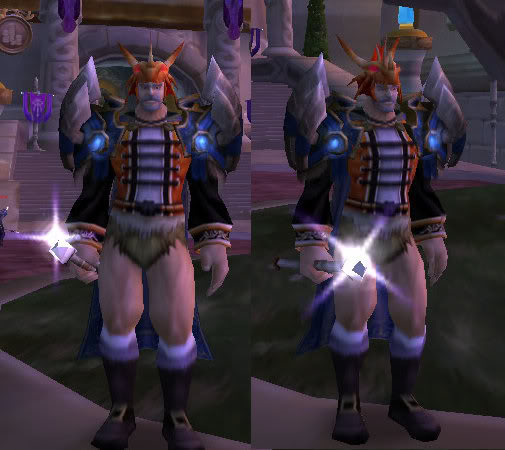 “Be honest… does this outfit make me look like a scumbag or just the biggest asshole on the planet?”

The Age of Enjoyment

You just finished a nice instance and listened to the storied history of an entire race. Every new zone is like a fascinating labyrinth for you to uncover; each upgrade nicely anticipated and much appreciated.

You’ve done plenty of tanking/DPSing/healing now and you’ve really discovered a knack for it. You feel like you contributed to the well being of your group and vice-versa! Isn’t teamwork great?

Every new ability you learn is one you practice with gusto; a maneuver or spell you pride yourself in implementing at the most opportune of times. And every time you ding? Grounds for celebration that fill your very heart and soul with exuberance. (Kind of like in Billy Madison when they threw a party for him every time he passed a grade.) You’re two bars away from Level 85. And who says everyone is a selfish jerk? Someone healed you while you were fighting an aggregate of reanimated skeletons… and you didn’t even ask them to!

The Age of Dedication (In Polygonal Purgatory)

Your guild needs food for tonight’s raid and you’ve been slaving away over a hot stove (with barely anything to show for your polygonal self!) for a literal hour now. You just added the finishing touch to your silver platter of flame broiled wild boar… a dash of Northrend seasonings and a nice apple in the mouth. You sure hope your guildmates appreciate your thoughtfulness, as well as the subsequent attack power and intellect boosts. (They won’t. Now get your ass back in the kitchen!)

Now it’s time to explore a cave with twenty four of your closest friends. You band together and stave off the efforts of some voracious bipedal dragon men. (And… f-----g whelps.) With the help of your friends, you overwhelm them. Hunkering down over their scaly corpses, you strip them of their valuables. Someone finds something called a “Seething Cinder,” after splitting open a dragonkin’s testicles. Your guild master says he’ll hang on to it for safe keeping, since “you wouldn’t know what to do with it.” Like a bank, but better, he says. A pale, disheveled mage that looks like he hasn’t slept in days expresses his distaste for that decision. When he is spurned he runs off from the cave with his head in his hands, sobbing inconsolably. You’ll never see him again.

You hear snoring loud enough to shake the ground beneath your feet. Everyone regroups and then you encounter an enormous sleeping dragon. You all charge into battle, unsure of the outcome. You seem to be doing well, until she tail swipes your tank against the wall. Then you’re forced to watch as she soars high above the raid, blowing from her snout a wall of flame with atomic bomb intensity. It incinerates your friends, your cohorts, and anyone you’ve ever held dear into piles of charred and blackened sludge. You try to escape, your fingernails clawing frantically into the cold, volute walls of the cave around you. But it’s too late. The conflagration, one that knows not remorse or pity, twists and dances over your fragile body. You scream in agony as your blood boils, your flesh melts. Before you die you hear someone yell with disgust, “Goddamit, that’s a wipe.” Everything goes black…

… You wake up thirty seconds later in a nearby graveyard. Say, all your friends are there too! Now… it’s time to face the dragon again. And again… and again… 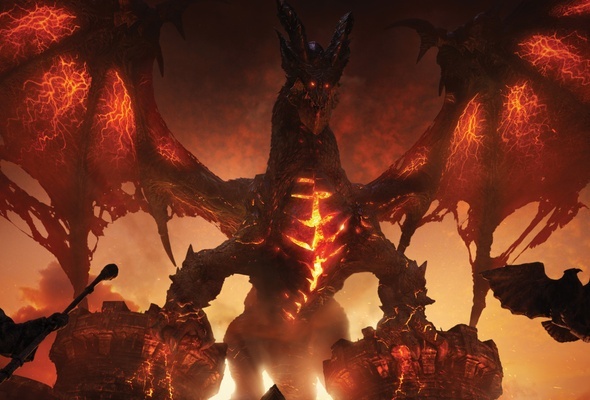 “So you’re telling me that if we just keep dying miserable deaths while facing this dragon over and over again we’ll eventually stumble upon the right method and find success? Are you sure this isn’t a MMORPG based on the movie Groundhog Day?”

The Age of… Sweet Mother of God, I can’t stop playing.

You just logged on for… what was it you needed to do again? Doesn’t matter. You can always just sit inside Orgrimmar and shoot the s--t with your friends for a little while (AKA several hours), waiting to see if they come up with any ideas better than you just sitting around… doing nothing. Maybe hit up an old raid instance or do some of those daily quests together. Or maybe that third guy from your 3v3 team will show up and you’ll climb the Arena ladder. Yeah, that sounds great, actually. Too bad it’s 4:00 AM and nobody you know is on. That’s alright… that’s exactly what they made random queues for! Playing with fellow insomniacs and people neglecting their children the world over! You’ll just wait patiently in queue for 30 minutes while the system finds a tank for you. You could farm some herbs to kill the time or… nah, let’s just alt tab, watch some amateur porn and wait for the horn to sound.

The Age of Denial

You swear you can’t stand the game anymore, even though you’re still spending more hours accruing fictitious currency and computer rendered items than a person confined to a forced labor camp. You swear you’re going to cancel your subscription once your game card is up and that you’re only doing Arena games “to help out your friend.” What’s that? Why did you just capriciously throw down $50 on a server transfer and $25 more on a character sex change? “To make the game fun again man, get off my back.” 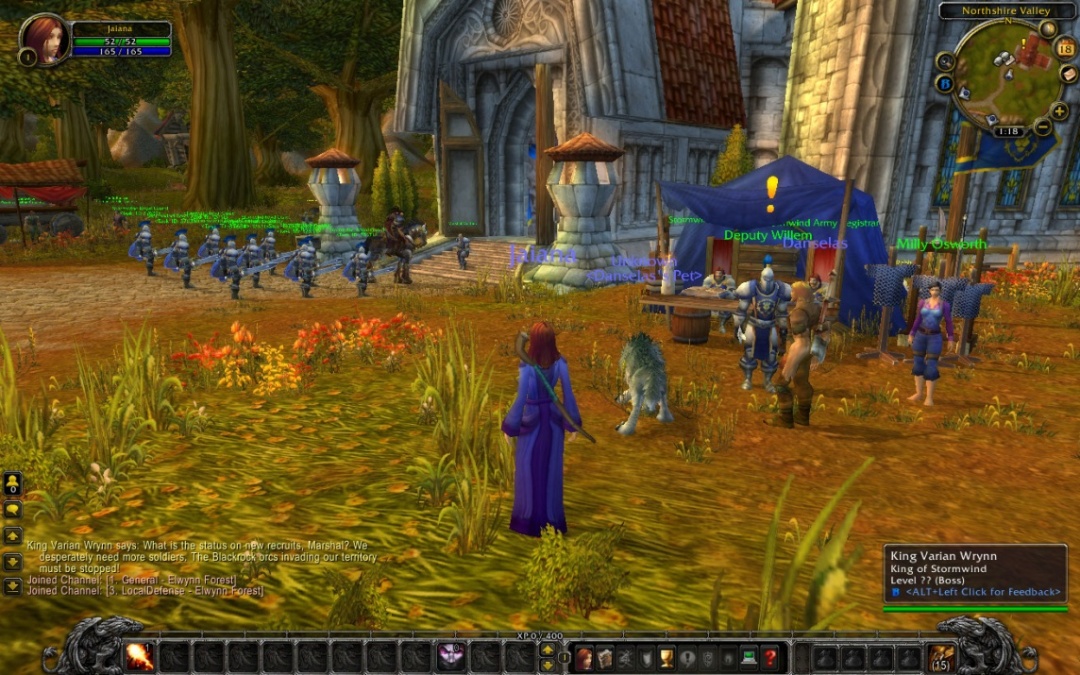 “I rolled a female because I just wanted to stay in touch with my feminine side, alright? The way her butt cheeks flex sequentially in that gossamer thin robe has nothing to do with it!”

The Age of… Sweet Mother of God, I finally escaped. Or did I?

The thought of even double clicking the World of Warcraft icon has you shuddering with revulsion. You have no desire to move your character even a virtual inch or to enter the same old instance just to slay the same old ogres with the same old spells for the upteenth time. You start getting out of the house more. Breathing fresh air. Wow… you forgot how good the sunlight felt on your pale, pale flesh. You don’t think about playing for some time. You’re doing stuff that anyone else deemed “sane” in society would consider productive. A person of the opposite sex said “hi” to you and it wasn’t immediately followed by the abbreviation “ROFL” or “WTF.” You feel great.

Then your friend tells you about the latest changes they just made to the game. “Man it sure would be great to play with you again,” he says. You swear you can see the goat horns of Satan himself sprouting from the back of their head as they talk to you; their voice as melodious as the mythological siren; their touch tingling down your spine with each assuaging pat of your back. “They’re giving your class a new ability and you’re totally balanced now! And they’re gonna let you play as Kung-Fu Pandas.” That night, after 45 minutes of sitting down in front of your computer and staring silently at the WoW icon, and your own tired reflection in the monitor… you finally break down. Sobbing, you download the latest patch and sign in…. and begin the terrible cycle all over again. 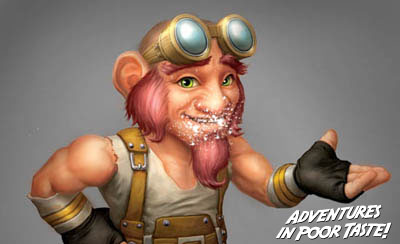 Need to pull an all-night gaming binge? Do it the right way with our Gaming Binge Survival Guide.

Played a tank? Then you’ll definitely relate to the World of Warcraft Tanking Creed.

Dear Square: It’s Not Me, It’s You. (And I’m Leaving You For Skyrim)