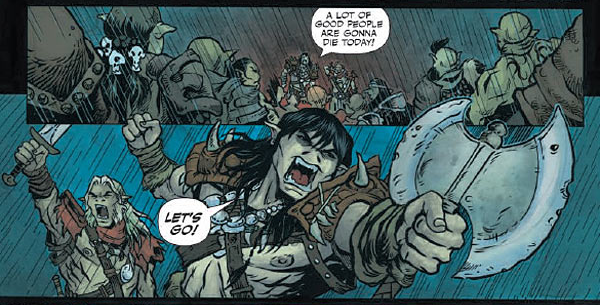 In this special issue of Rat Queens we get the backstory of Braga: a one-eyed, transgendered orc queen.

This issue comes at a pivotal time for Rat Queens; this is the first issue without series artist Roc Upchurch, so not surprising that they chose to use the close of their first arc to take a breather from the main story.

The issue opens with a voluptuous orc lady named Braga, post-coital and having a morning chat with her lover. (We previously met Braga as a member of a fellow adventurer group, the Peaches.) The unseen companion asks her about her past and we flashback to Braga on a battlefield, except in the flashback she is male. Braga is going through a bit of an existential crisis – his father is getting older and wants him to take over as chieftain of the clan. But Braga isn’t interested unless some orc traditions start to change.

Cue an ambitious younger brother, a father who isn’t a fan of change or his son’s very close relationship with his best friend and soft demeanor, and you get violence, a lost eye, and being disinherited.

I really enjoyed the story in this issue. Rat Queens has a very rich world with plenty of characters to explore and I especially appreciated getting a look at the first transgender character we’ve met. One of my favorite things about Rat Queens is the easy diversity – characters are who they are and it’s all just part of the story.

Wiebe’s writing is as strong as usual, with a real knack for dialog that feels natural and zips the story along. You can feel the depth and length of Braga and Kruk’s relationship just from the first couple panels we see them in.

In place of Upchurch, this issue features a new artist, Tess Fowler, though she won’t be the regular artist for the series. She’s following in big footsteps — Upchurch’s art was a huge part of the appeal of this book for me, and she’s responsible for both the art and color as he did.

Overall, I thought her style fit really well into the Rat Queens universe, though her colors tended to be a little more muddy and there’s a softer quality to the art overall. Her gore is also less extreme than Upchurch’s (which frankly made it easier for me to read — I have a hard time handling hardcore gore). I’d love to see what she can do with the main crew; plus, it’s nice to see another lady on the production team.

Next week we swing back into the main story and I for one can’t wait. This issue didn’t feel like a placeholder, it just whetted my appetite for more of our foul-mouthed heroines.

In this article:comics, reviews
Up Next:

Is It Good? Alien vs. Predator: Fire and Stone #4 Review