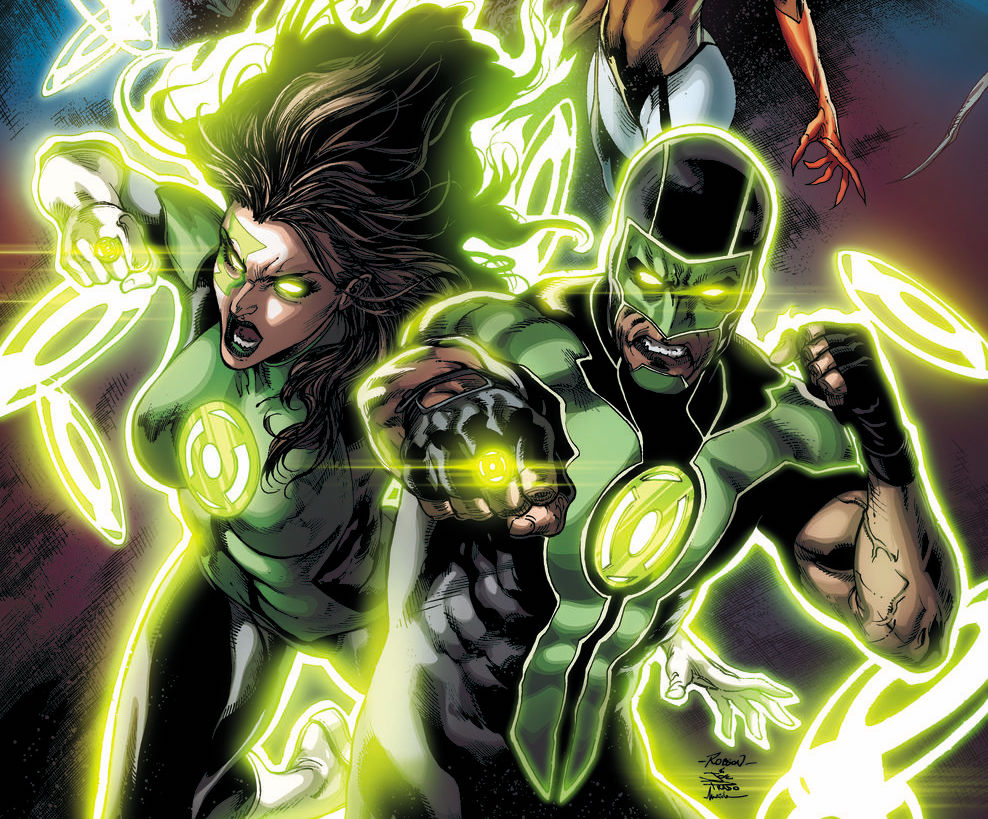 Some of the best Green Lantern stories evoke an outer space buddy cop vibe. Who doesn’t like a cop drama, especially with two characters forced to be partners? DC is doing just that with Green Lanterns, pitting Simon Baz with Jessica Cruz as the Earth’s protectors… but is it good?

New Lanterns Jessica Cruz and Simon Baz promised to protect others in brightest day or blackest night, but as “Red Planet” begins to rise, the partners find themselves confronted with an unimaginable threat from Bleez and the Red Lanterns!

Sam Humphries is bringing his talents to DC and if the Green Lanterns: Rebirth issue is any indication he has an interesting character dynamic to work with. One of the two is named Simon Baz who is a bit angry, but also sure of himself while Jessica Cruz is brand new but willing to learn. Together they must work together and keep Earth safe while Hal Jordan is off doing…whatever it is he’s doing. Robson Rocha is also on art and he brings a detailed style that should be liked by many.

This issue has quite a cop drama feel to it as Baz and Cruz rush to the scene of a crime thanks to their rings letting them know an unauthorized alien has arrived on Earth. Humphries makes their approach feel unique as they come in hot, make a few mistakes, and are generally in over their head. Like a good cop drama though they work as a team (with a few ruffled feathers) and attempt to do their best since Hal forced them to work together. Meanwhile, there’s a bonafide crime that has taken place, a looming threat from the Red Lanterns that could spell the end of Earth itself, and quite a bit of growing pains for these new Lanterns. This story has everything you need to create one hell of a drama and it appears most of the big heroes aren’t around to help either.

While the going-ons of the Red Lanterns and the growing pains of being a Green Lantern are compelling enough, Humphries doesn’t lose sight of the day to day life of these characters either. We check in with Baz’s family and Cruz’s too (although much more briefly) which is important because their non-superhero work helps the reader connect with the characters. It also helps they are still learning on the job too and with these elements combined it’s easy to put yourself in their shoes.

Humphries does a good job establishing how dire the situation is for the Red Lanterns too. They’re pushed against a wall and ready to do whatever it takes to make sure the Red Lanterns don’t die off. Considering how green (heh) the two Green Lanterns are, the stakes are ever higher. Plus there’s talk of a “Red Dawn” so you know that’s going to be epic!

Rocha does a fantastic job on art as always in a very detailed and coherent style. Much of the art is quite cinematic – especially when the crime scene gets gruesome – and there’s quite a few impressive pages. One of which includes us first seeing the Red Lanterns with Atrocitus holding a Red Lantern by the head. He’s standing tall and around him red light and sparks float by as if he’s standing in a volcano (maybe he is?). It’s epic and sets the stage for one badass villain for our heroes to eventually take on.

Back to the story, there’s also a major reveal as far as power sets (which seems to be something happening quite a bit with Green Lanterns lately) that will get people talking. I for one find it pretty cool that Green Lanterns can somehow form special abilities from one another and it’ll be interesting to see how Humphries caries this element forward.

My only gripe is with the bad guy’s speech, which is so melodramatic it’s nearly eye rolling. He’s making proclamations and talking so big it becomes standard bad guy postulating. It’s not that big of a deal – it is a superhero comic after all – but it certainly makes him come off as a flat evil villain for evil’s sake.

This is quite an exciting start for Green Lanterns and a strong first issue. The buddy cop formula works incredibly well and Humphries has himself one complex and compelling story on his hands.