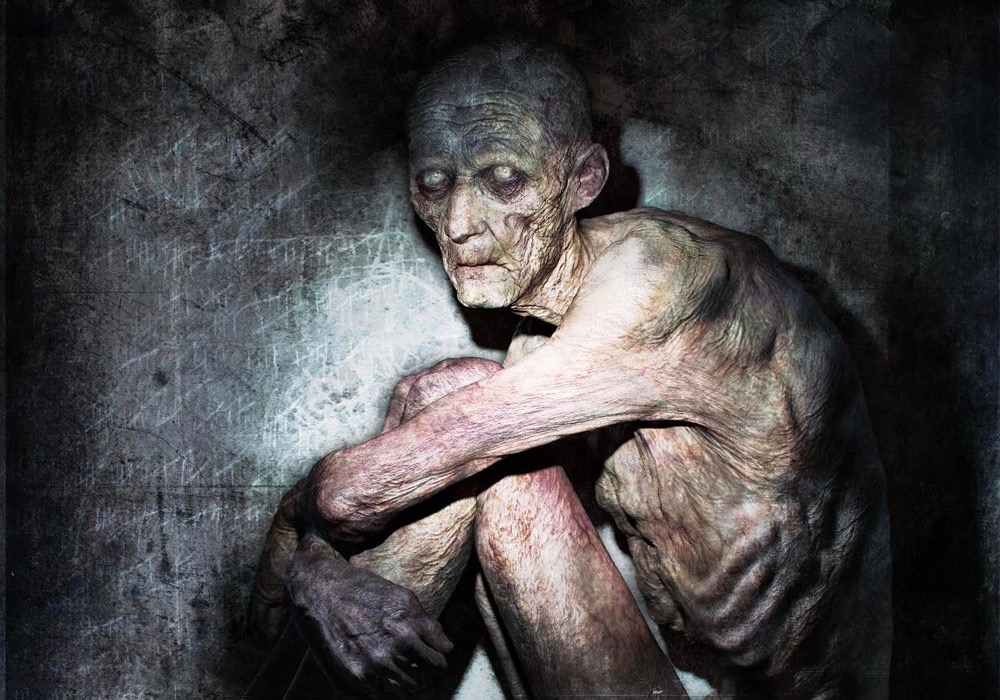 In 2015, Gehenna: Where Death Lives became the 3rd most-funded horror film in Kickstarter history, with 1,236 backers contributing $239,440 by the time the funding period ended. The movie follows Paulina (Eva Swan), Tyler (Justin Gordon) and Dave (Matthew Edward Hegstrom) as they scout Saipan for their company’s newest resort. After meeting up with Alan (Simon Phillips), who serves as their location coordinator, and his assistant Pepe (Sean Sprawling), they find a hidden Japanese bunker, which they decide to explore. This leads to them getting trapped inside after a member of their group accidentally kills an old man (Doug Jones) they find within.

Gehenna is a masterclass in psychological horror, exploring the pasts of its characters and Saipan’s troubled history with colonialism in a frightening way. Much of the movie’s horror comes from its fantastic use of practical effects — and that’s in large part due to the man behind the campaign and the camera: Hiroshi Katagiri.

Katagiri made his name in the industry doing special effects for movies such as Rian Johnson’s Looper, Steven Spielberg’s A.I. Artificial Intelligence, and John Carpenter’s Escape from L.A. While Gehenna is his first feature-length film, he’s already made three short films: Crayon, Pulse, and Hindsight, which are available on his Vimeo page.

Katagiri and executive producer Saik Meng Kee (Dearest Sister, Cyborg X) were kind enough to talk with us over email about making the film, the complicated history of Saipan, their plans, and the upcoming VR game, which will be the movie’s sequel.

Hiroshi Katagiri: It was the late 80s when I decided to come to America to pursue this career. The technology of makeup FX was so new at that time, and as far as I knew, there were only a few people doing it in Japan, and the level was far behind Hollywood films. I had been influenced by Hollywood films since I was a little kid, and working for those films was my dream. So I decided to study in the U.S.

AiPT!: Gehenna raised $239,440 on Kickstarter, which is the third largest-ever for a horror film. However, that’s by no means a blockbuster budget. Did you run into any financial troubles while filming?

Even if it was a huge Kickstarter, it was nothing for making a film. But Kickstarter was a great marketing tool, and I got attention from so many people through the campaign. So I was able to find several investors through Kickstarter. Otherwise, we wouldn’t have been able to go to Saipan to shoot there.

Also, what I could cut down on was FX budget. That means I had to do so much of the FX work myself. That was extremely hard, but that’s the only way to keep good quality FX in a low-budget film.

Katagiri: Bojobo doll is an actual doll in Saipan. It’s a pair doll, and, depending on how you tie them to each other, you can bring different luck, such as love, money or health etc. … I thought it was a very unique item, and I turned them into cursed dolls, and this became a kind of key item for the film.

Also, there were stone ruins called “Latte Stones.” They say they were the foundations of a building, but they also found a bunch of skeletons buried around those stones. No one knows the reasons, and there is a myth of those stones that they may use those for some kind of ceremony. I love that mysterious part, and I used “Latte Stones” in the film and also as the symbol of the curse.

AiPT!: Many Japanese and Americans died fighting on Saipan during World War II. Past trauma is also one of the movie’s major themes, being the catalyst for a lot of the horror. How much did that location matter to you in telling the story?

Katagiri: Saipan is a very unique place. There are so many amazingly beautiful sites, but at the same time, there are many war memories remaining, such as broken tanks, bunkers, cannons, bomb storage etc. … and they are still there at the same site.

I had very complex feelings when I saw those horrible war memorials at really amazingly beautiful sites. In the film, showing those beautiful sites was so important, so when characters go into the bunker, the audience can feel even more miserable by the contrast with the exterior. And the entrance of the bunker in the deep jungle is scary itself.

AiPT!: Saipan has had a long colonial history. The Spanish, Germans, and Japanese have all occupied the island, with it currently being a commonwealth of the United States. Colonialism is all over the film, so can you tell me more about that?

Katagiri: As I researched the history of Mariana Islands, there was a horrible colonial history, especially when the Spanish came, which was about the same time as Columbus found America. The Spanish enslaved the Chamorro people and even massacred them. It’s a horrible history.

I focused on that part of history with the locals’ grudge against the Spanish creating the curse. Japanese soldiers were also the victims of the curse during their occupation in the film.

The Cast in a Circle of Latte Stones

AiPT!: Gehenna and your short films have all been horror, but you mentioned in an interview with Film Ink that your next film might not necessarily be horror. Is there any particular genre you’d like to try out?

Katagiri: The next film I’ll be directing is sci-fi. Most of the story takes place inside of a spaceship, so it can be really low budget. I’m so excited for that. Also, I’d love to make a comedy. During the Kickstarter campaign, I made a lot of funny videos to attract attention. I really enjoyed making those. Here are some examples if you are interested. [I’m Backer and Samurai]

But I’m not just focusing on the future, I also have to find good distribution in the U.S.

AiPT!: How did you meet Hiroshi Katagiri and get involved with producing Gehenna?

Saik Meng Kee: I met Hiroshi through Kickstarter. After that, there were tons of communications on email, Skype and Facebook. It was quite a lengthy discussion, but once I found out about his past portfolio of Hellboy and War of the Worlds, that was a done deal for me. And we only met face-to-face when I joined the production crew in Saipan. In Saipan, it was also the first time I met the production crew who came from LA, Japan, Finland and some locals. I guess this itself is the new way of filmmaking: online, distributed, cost-efficient, crowdsourced and gathering the best talents from all corners of the world! I have a tech background, so I am always keen to explore disruptive business models.

AiPT!: You said in an interview with Dread Central that the challenge in producing Gehenna came from “creating awareness for this very unique film.” How did you go about doing that?

Kee: If we look at past horror franchises like Paranormal Activity and Saw, we can see a formula of worldbuilding, deep mythology and a central horror character. And the audience loves that; it creates a reason to follow the sequels. And Gehenna is unique in that sense, it has a dark world in the World War II cave-bunker with a deep mythology that spans all the way back to witchcraft during the Spanish Inquisition. On top of that, you have the well-designed Old Man that is so mysterious, that at the end of the movie, you need to figure out its mind-bending puzzle. I think it is a fresh idea that will resonate well with this new generation. In some of the test screenings that we have done, some people have asked for a second viewing. From the response on the YouTube trailer, we can see that a cult-following is growing steadily.

A Compilation of Hiroshi Katagiri’s Work

AiPT!: There are plans to make a direct sequel Gehenna into the form of a VR game. What can you tell me about that project?

Kee: This relates back to the previous question. We see that VR is the coolest thing now with the young generation. It used to be just interactivity, but now it is about immersion, you can now walk inside the game, touch things and explore the world. I have just launched the first free roaming multiplayer VR Park in South East Asia, and we really see an interesting response when players discover VR for the first time. And the Gehenna world lends itself well to VR. You can hear footsteps running around you 360 degrees, you will frantically shine your torchlight around in the darkness, you can hear somebody breathing onto the back of your neck, and when you turn around, you may find a pair of eyes staring straight into your eyes. This is how close you can get. VR gives an opportunity for continuity, in terms of story and worldbuilding.

In this article:horror, interview
Up Next: