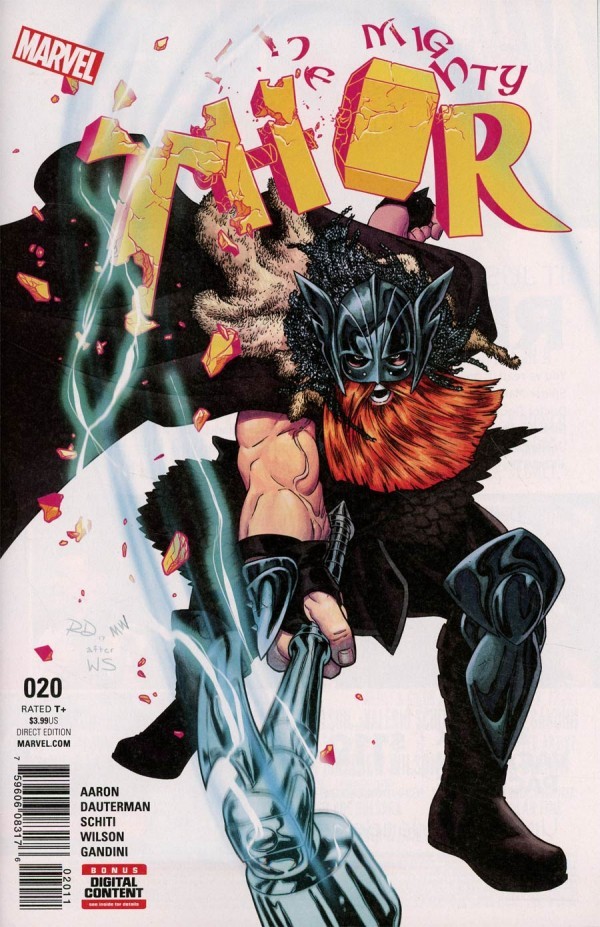 The new story arc in The Mighty Thor is titled “Baptism by Fire” and you will understand why by the end of this issue. Volstagg gets the better part of page time in this issue and boy oh boy does his character have a transformation!

THE SAGA OF THE ALL-NEW ULTIMATE THOR STARTS HERE! The Ultimate Thor died defending the Multiverse, but his hammer remains. Who will hold the hammer now? War is coming to the Ten Realms. Can the new Ultimate Thor keep back the bloody tide?

Jason Aaron is putting together a years-long epic with his Thor titles and this issue is yet another important chapter. I think it’s safe to say, with the amount of cosmic and time travel stuff going on, this will be a run that’s forever remembered. Jump on now!

I love this map!

This issue opens with a close up of a map of Nidvallir drawn with great detail and fun titles that map porn folks should see. It instantly gives us a fantasy feel, so that when we cut to a dark and stormy mountain we’re very aware of our surroundings. Aaron pulls the reader in with Volstagg, a politician elf named Milkmane and an agent of S.H.E.I.L.D. visiting an elf refugee camp. Then all hell breaks loose. If you follow Volstagg’s arc in this issue it’s deeply meaningful and revealing. There are no half measures with his character’s trials in this issue, which makes the full page cliffhanger all the more powerful.

There’s also a very important meeting between Jane Foster and Odinson that longtime fans will want to see. Aaron has put off their inevitable chat for some time and it’s nice to see them finally connect in some way. Odinson is obviously angry she took the hammer and he’s still not over it, but with Jane’s frail form and emotional reaching out to Odinson it’s hard to not see they may be able to make up for lost time. Jane also makes an intriguing point about fearing she’ll stay as Thor forever because her human form is so frail and close to death. It’s a heartfelt moment and worth a look.

Russell Dauterman and Matthew Wilson pull together another fine issue with the opening full page map being a big highlight. I dare you not to ogle that map for longer than necessary! The final full page spread is pretty damn epic too and if you can get over the somewhat cheesy name you’ll be beating your chest with the new character transformation. In a key scene, Dauterman and Wilson do an incredible job as Volstagg witnesses something truly awful. You’ll feel for the character in large part because the art makes him so empathetic and vulnerable.

I was somewhat lost as far as the war being waged which ends up being a huge plot element to Volstagg’s journey. Maybe I missed something, but the way we’re dropped into this war is somewhat confusing. Who are the bad guys and why are they doing this? It’s somewhat of a head scratcher.

Thor fans might be annoyed the character doesn’t appear once in the book (I’m talking Jane Thor here). That said, a new Thor emerges so if you want to split hairs you could argue he’s in the book from the very beginning. Speaking of which, while it makes sense why this character is filled with rage, it’s a bit surprising they’ve gone from loveable to mad so easily. Maybe there is more to it, but at this stage it seems too easy.

This is an excellent chapter that offers payoff for those who have been reading for a while. It also sets in motion a new threat and a character transformation that you have to see to believe.

The Mighty Thor #20
Is it good?
A strong introduction of a transformed character.
Payoff for those who have been reading for awhile
Solid art with a map that'll knock your socks off!
Volstagg's arc is strong
While the transformation is cool how did they go from lovable to mad so easily?
8
Good
Buy Now
Comixology/Amazon