Amazing Spider-Man #3 review: Wacky in the best of ways
Advertisement 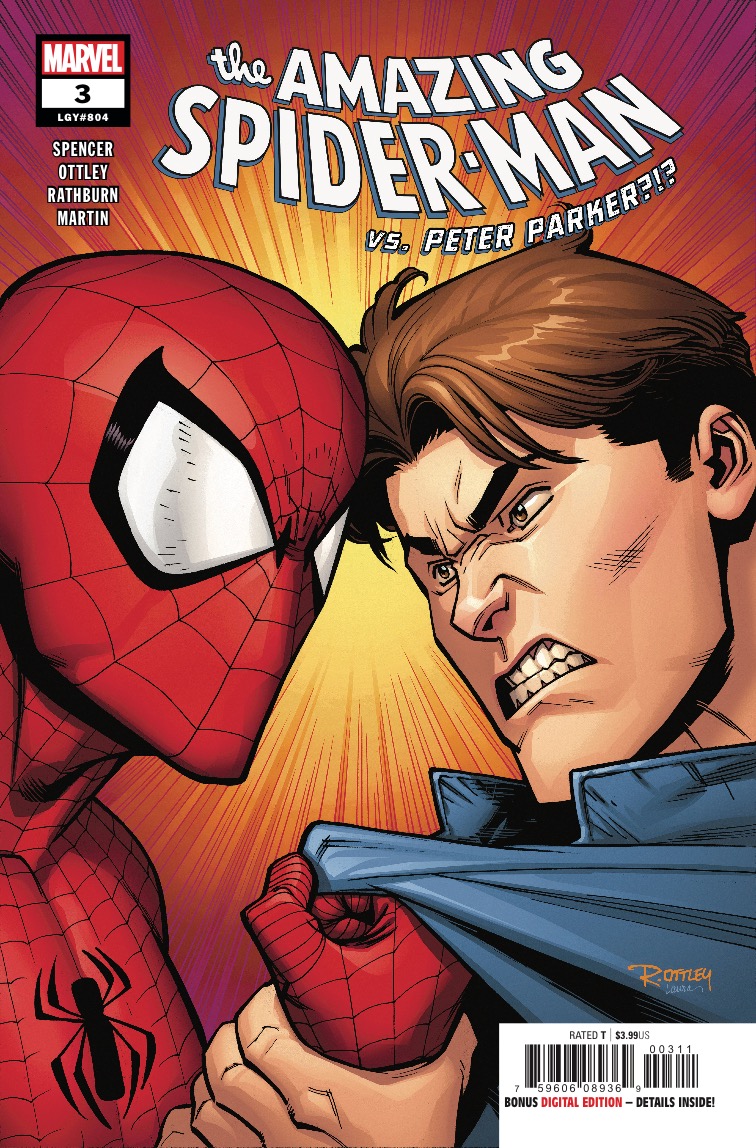 I’m surprised to be saying this, but Marvel Comics has simply done the impossible and given every main hero the “Fresh Start” they deserve. That includes Spider-Man, who has a fresh face that also harkens back to what made the character great over the last 55 years. A new twist is throwing things for a loop for good old Peter this time around further making this a fun new story.

It’s been 55 years to the month Spider-Man has been swinging on to the scene and yet writer Nick Spencer and Ryan Ottley are making it feel fresh once again. Spencer has a great handle of character dynamics while Ottley supplies the super detailed pencils that he was born to draw.

Another opening page set in Africa. What does it mean?

This issue opens much like the last with a scene in Africa. A tourist has just shot an elephant and he sure is proud. Spencer writes captions that relate to change and how knowing there will be change is the only real constant. Cut to Peter Parker bowling and you get a gist of what he’s going for with the opening page. I’m still uncertain if these scenes in Africa will add up to anything, but it’s nice to see it repeated at least (which in a funny way is a reflected by the captions about change). This issue continues to reveal how change is affecting Peter and Spider-Man in their respective areas of life. Peter is getting his happy ending of normal life and, well, let’s not spoil it. Spencer is taking a risk with a new science-style predicament that feels new and old at the same time. That’s due to the cloning saga he’s endured, but also how this new dichotomy is a new twist on the idea.

In retrospect, the new conflict Peter is facing is the perfect mechanism to deliver good character drama with fight scenes galore. That allows Spencer and Ottley to cut back and forth between the normal life and the superhero lifestyle. We get a big superhero battle in this issue and also developments in Peter’s life and the life of his roommate (the non-supervillain one). By the end of the issue, Spencer makes a strong case to be fully invested in the drama unfolding and I can’t wait to see how this plays out. They say the ultimate battle for a hero is to fight themselves and it’s building in a way to deliver on that figuratively and literally.

At this point can we just let Ottley draw Spider-Man forever? I’ve always loved his lines be it Invincible or the excellent Giant-Size Kung Fu Bible Stories. Spidey looks great with an attention to detail (like the rippling muscles in his forearm as he swings away) that is appreciated. He’s given Peter a youngish look that brings the character back to a time in his life that is nostalgic and familiar.

I’m a little confused as to why MJ is okay with Peter’s predicament. Avoiding spoilers here, but the change should be making her question what is going on and instead, she’s standing by as if it’s normal. Maybe we’ll explore that later, but so far it hasn’t come up. Another element that hasn’t come up is Peter’s new roommate who is also supervillain Boomerang. That seemed to be a major element but so far we’ve seen zip from the character.

The name of this story arc is “Back to Basics” and in most ways it very much is. That’s probably why this first arc is working so well. Peter’s life has been simplified and all he really wants is a few wins (a big change since he owned a billion dollar company, for instance). Spencer and Ottley are doing a great job establishing a baseline that’s familiar which further puts into focus the exciting (and welcomely wacky) new conflict.

Amazing Spider-Man #3
Is it good?
A lot of fun as it builds up a new conflict that should put Peter in a very tough spot.
A good split between Peter and Spider-Man, with an even better twist on that
The art is perfect for a Spidey book
I'm still wondering what the opening page in Africa is about
MJ isn't surprised Spider-Man is running around with Peter in her company?
8.5
Great
Buy Now
Comixology/Amazon

In this article:Amazing Spider-Man, comic books, nick spencer, review
Up Next:

A new threat to mutantkind is revealed in ‘Hunt for Wolverine: Adamantium Agenda’ #4