Red Hood and the Outlaws #26 review: An entertaining and bold new direction
Advertisement 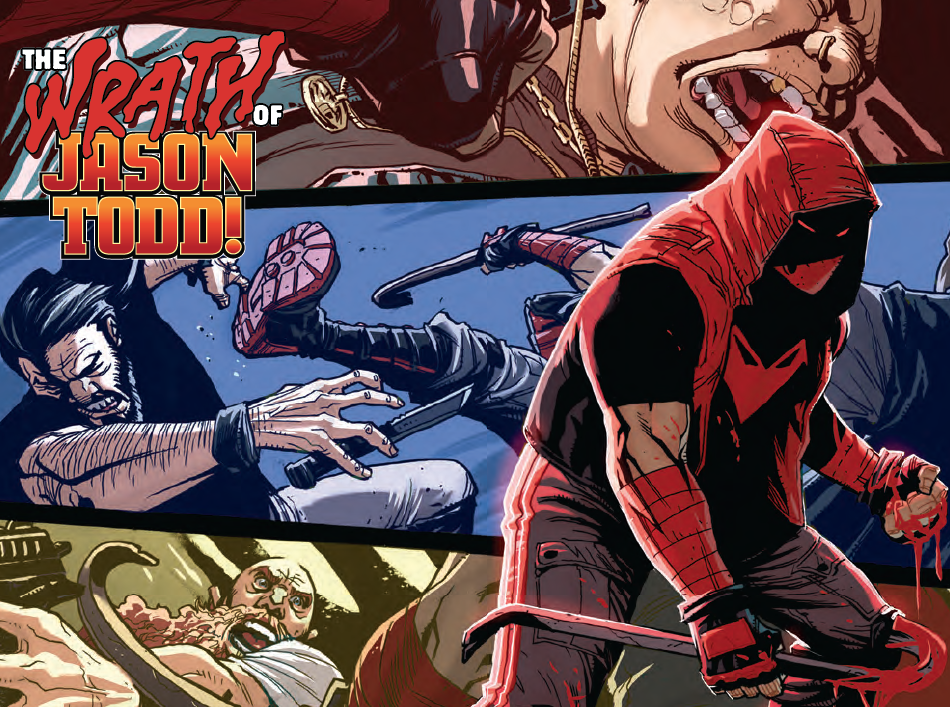 It’s never been easy being Jason Todd. He’s been murdered, resurrected, betrayed by his father figure, beaten to a pulp by the same father figure, abandoned by his mother — the list goes on and on. Things aren’t good for him now, either. Jason’s life is close to hitting rock bottom after losing both his partners and getting the ever-living s--t kicked out of him by Batman left him without a team and without a home. Enter Red Hood and the Outlaws #26, the first of many issues featuring a solo Red Hood waging a very angry and personal war on crime. This new direction for the character kicks off with a bloody, action packed, and introspective issue that shows just how far Jason Todd has come since his days as Robin.

This issue has a blisteringly fast pace that bounces from one action sequence to the next with little time in between for exposition or context. This would usually hurt most books, but the thin narrative presented here totally works because this issue is not about a new crime boss or new drug on the streets — it’s about Jason Todd and his descent into righteous vigilante rage. The focus on action and re-characterizing Jason Todd over narrative focus actually helps this book feel more effective in launching a new era for the Red Hood.

Writer Scott Lobdell does a fantastic job of changing Red Hood without making him completely unrecognizable. He definitely has a much, much bleaker demeanor and avoids the usual small talk or long winded inner-monologues, but glimpses of the old Jason Todd are still there.

He still drops quips and sweet one-liners during the middle of fights and delivers some great retorts and threats reminiscent of previous issues, but everything just feels… darker. Lobdell manages to strike a perfect balance of progressing the character into something new without utterly changing who he is.

If anything, this is the first time Jason has ever embraced who he is. Ever since he first donned Dick Grayson’s hand-me-down Robin garb, Jason Todd has struggled to discover who he really is. He couldn’t cut it as Robin, could never truly embody a villain after re-emerging as Red Hood (or a Nightwing copycat), and never truly felt at home as the anti-hero vigilante leader of the Outlaws. Yet here, in Red Hood and the Outlaws #26, Jason knows exactly who he is — he even utters the phrase “This is me” as he shoots two biker gang-members in the head.

No more rubber bullets, no vow against killing, no attempt to be like the rest of the Bat-family. For once in his life, Jason Todd knows exactly who he is. As a longtime fan and reader of Jason Todd, it’s simultaneously uplifting and unsettling to see such a moment of clarity for the character. It’s honestly empowering to see him finally find his identity after struggling for so long, yet it’s troubling to see that identity is so dark. It begs the question: when does self-discovery become destructive? Should a person resign to a life of self-doubt when self-assurance leads to a darker yet more comfortable path? It’s the questions about the idea of self that arise in this issue that truly make it stand out.

With this new sense of self comes a new costume for Jason Todd, and new artist Pete Woods does a tremendous job with the new look. I was skeptical at first, but this new outfit is perfect for the grittier, more brutal Red Hood. There’s something so darkly ironic about Jason Todd bashing criminals’ faces in with a crow bar that this new costume feels so right for the new direction of the character. Woods also makes terrific use of lighting and shading to present Jason, in his new look, as a shadowy figure dealing death while unseen.

This is an action-heavy issue, and right off the bat Woods and Lobdell showcase how lethal the Red Hood has become, as he cuts throats, burns people alive, and splits skulls to anyone who dare step up to him. Most of these moments, especially the opening fight, are wonderfully constructed, seamlessly flowing from one panel to the next as if it were a storyboard for a Hollywood production. The closing fight, however, is a little more chaotic and harder to follow. Random henchmen appear from one panel to the next, making it hard to really imagine the flow of the fight or keep track of what’s going on.

Red Hood and the Outlaws readers may be saddened by the disappearance of Artemis and Bizarro, but issue #26 sets the stage for a brutal, deeply personal solo outing for the titular Red Hood. This issue is a fast-paced, action-packed, and thought-provoking study of one of DC’s more complicated characters that shows true character progression while managing to keep the core facets of the character intact. The shift in tone and characterization may be drastic, but it’s damn well executed and worth checking out.

Red Hood and the Outlaws #26
Is it good?
Launching a fresh and darker take on the series, Red Hood and the Outlaws #26 is action-packed, thought-provoking, and rife with wonderfully executed character progression in the titular hero, making it yet another standout issue in a series that has already been consistently great for months.
The changes to Jason Todd are drastic yet not so much that he’s become unrecognizable or something utterly different
No unnecessary exposition or plot points; it's purely focused on progressing Jason Todd as a character
For the first time in his career, Jason Todd has finally found comfort in his identity, though this identity may have been left undiscovered
The new costume is perfect for this new direction
The opening fight is not only very well drawn and paced by Pete Woods, but immediately sets the tone for what to expect out of this new version of the Red Hood
The second big fight is very chaotic and hard to follow, making it pale in comparison to the opening pages
Even as great as this issue is…. I still miss Artemis and Bizarro
9
Great
Buy Now
Comixology/Amazon