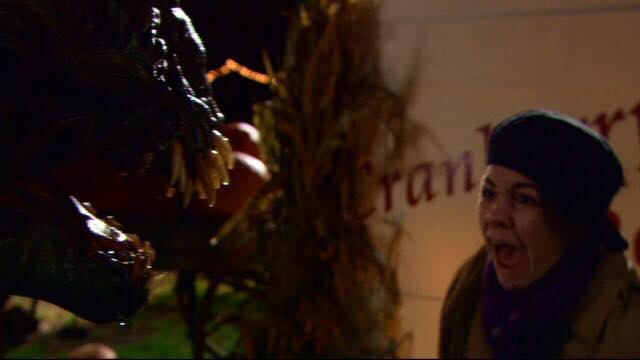 You may have grown up reading R.L. Stine’s chilling Goosebumps books which debuted in 1992. Three years later, it had its own show, which went on for four seasons. In 2010, The Haunting Hour: The Series premiered, displaying Stine’s work so that a new decade of children were too scared to go to sleep at night. Stine has spent years finding ways to give children a spooky thrill, which is why his work is still a popular to this day.

In 2007’s The Haunting Hour: Don’t Think About It, based on the children’s book of the same name, our protagonist is a young teenage goth girl named Cassie (Emily Osment). She’s forced to move into a new town and go to a new school, where she is teased by the Halloween Queen Priscilla (Brittany Curran) after expressing interest in the blonde heartthrob Priscilla likes (Cody Linley). On top of that, her brother Max (Alex Winzenread) is a constant annoyance to her. Fed up with her life, she goes for a walk and comes upon a Halloween store. She purchases a book titled The Evil Thing and, despite the warning label, she spitefully reads it aloud to her younger brother after he gets on her nerves. Soon after, the two-headed monster from the book comes alive and begins terrorizing her and those close to her on Halloween night.

The music for this movie, picked by Chris Hajian, sets the perfect tone. When Cassie enters her new high school for the first time, Adam Merrin’s “Still Alright” is playing. I fell in love with this song after my first viewing of the film. This song, amongst others that were used, gives us insight into Cassie’s thoughts and, more importantly, her emotions. The sad and slow melody makes it easier to understand and feel sympathetic towards her although she’s not a very likable character. Every so often, we hear Halloween music, which gives the proper spooky ambiance to get us in the holiday spirit. The switch back and forth is spot on, so we’re never left feeling too glum or too scared for long periods of time.

The acting in this movie isn’t all that great, but the casting choices were fine. Some of it had to do with the at times cringe-filled and inorganic dialogue, which was written by Dan Angel and Billy Brown. Also, the characters are incredibly stereotypical. However, this does not mean the cast is off the hook. It doesn’t seem as though they gave this movie their all. However, Tobin Bell, who played the creepy Halloween store owner, was an incredible pick. We already know that he’s excellent at filling such a role since his stunning performance as Jigsaw in the gory torture porn Saw, and his talent in this film was no different.

The movie did a swell job at creating frightening but age-appropriate scenes. The opening scene in particular had me immediately captivated. Also, during the Halloween bash, there is a moment involving a cockroach-stuffed piñata that gives a grotesque but kid-friendly tribute to the 1976 classic Carrie.

Even though I’m in my twenties, I watch this movie every October. Despite the flaws, what with the laughable acting and cheesy script, it’s still a fun, spooky watch, especially for the little ones, and it’s a fitting addition to your R.L. Stine collection.

The Haunting Hour: Don't Think About It (Movie)
Is it good?
The Haunting Hour: Don't Think About It definitely has its flaws, but kids usually don't care about that stuff. It's family-friendly, so grab some snacks, turn off the light, and enjoy this fun, perfect-for-October movie.
Child-friendly
Fun for the family
Perfect background music
Tobin Bell does great with his role
Great watch during October
Cheesy script
Laughable acting
5
Average
Buy Now
Amazon

Sleepy Hollow (Movie) Review: One of Burton’s many successes