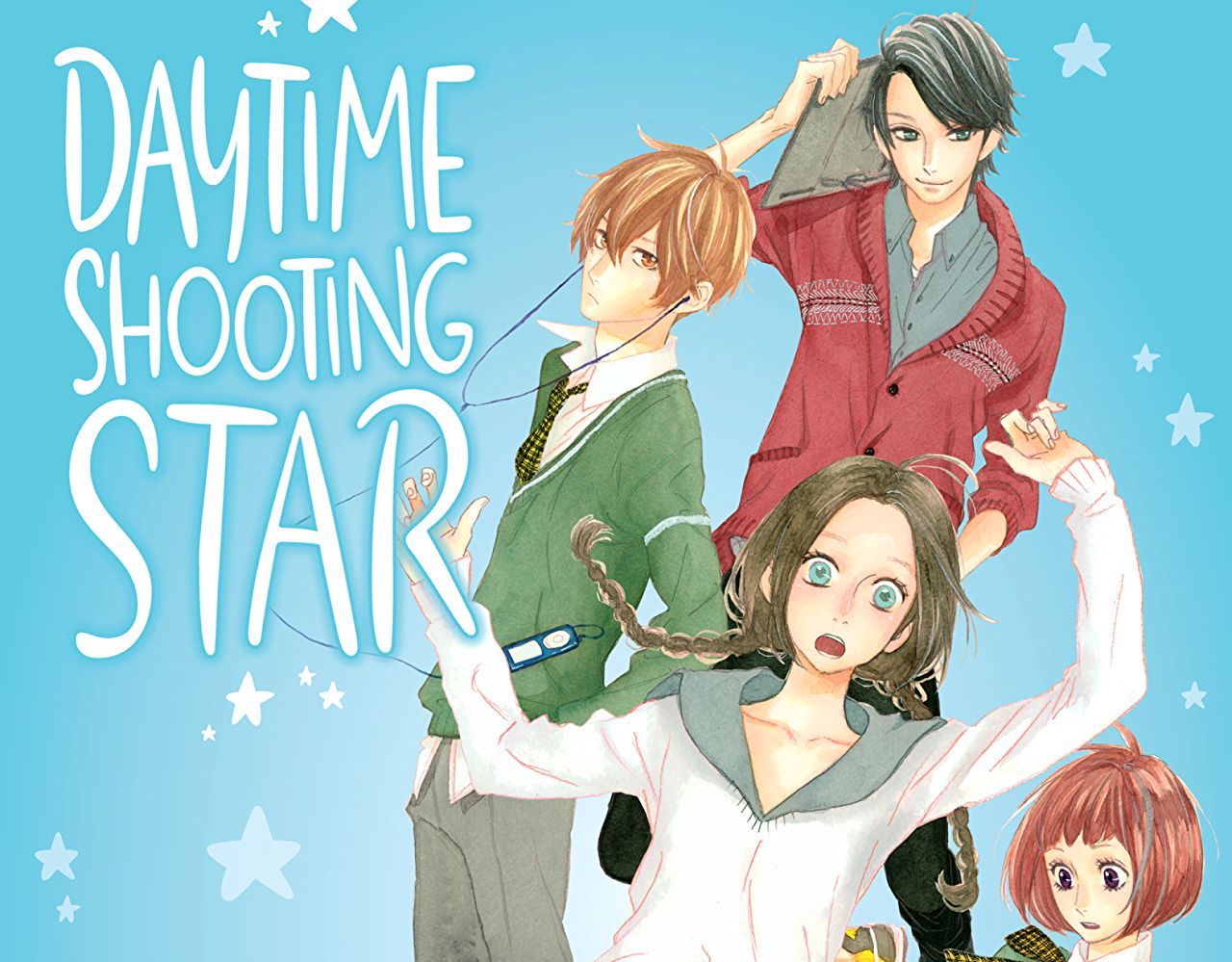 Daytime Shooting Star is the latest Shojo Beat manga from Viz Media. It’s all about the awkwardness of changing high schools and trying to make friends and make sense of your life. Problem is, Suzume not only unsuspectingly fell for her homeroom teacher, but she’s also a target of one of the worst bullies in school. This country girl has a lot to learn now that she’s in a Tokyo classroom.

After arriving in Tokyo to live with her uncle, Suzume collapses in a nearby park when she remembers once seeing a shooting star during the day. A handsome stranger brings her to her new home and tells her they’ll meet again. Suzume starts her first day at her new high school sitting next to a boy who blushes furiously at her touch. And her homeroom teacher is none other than the handsome stranger!

If you like melodrama, clever visual storytelling techniques, and well-written characters you’ll probably love this. It’s a high school melodrama, but it’s a story that’s easy to relate to since Suzume is the odd one out.

I was a little wary of diving into this manga since the main premise seems a bit creepy. Suzume basically meets a stranger who is nice to her the minute she arrives in Tokyo. The same man knows her uncle who she’s moving in with and is super cute. Cut to the next day when she learns her homeroom teacher is the very same man. It could easily end up being creepy, especially with the state of teachers sleeping with students in America these days, but instead, it remains a cute distance. Mika Yamamori focuses most of the attention on Suzume’s awkward feelings I think many students go through. The teacher, named Shishio has no bad intentions, at least he says as much, which makes the dynamic feel more coming-of-age than creepy. Another element that sets this relationship apart is how Shishio dresses differently between school and outside of it. It creates a visual dynamic that is understandably confusing for Suzume.

This manga isn’t all about Suzume and her growing interest in her teacher, though. We also meet an awkward boy Suzume forces a friendship with, a clever blonde girl who is a super-bully, and a few wandering students too. This cast of characters feels natural, making the overall story easy to follow and believable.

Visually this story has a lot of tricks up its sleeve. Take for instance a moment where Suzume slaps someone. The first panel on the page has Suzume silent, eyes covered by her hair, and standing still. Behind her are these blobs of black, presumably the brooding fury inside her. In the very next panel, we see a stroke of lines and a sound effect. It’s her hand flying through the air. Next, we see Suzume and the person being slapped frozen in time and Suzume’s hand is still, her victim falling backward stunned. The two characters are textured as if they are crystal or some still precious material. Gentle slashes of white go through them. All three panels together make for a gripping and shocking moment that is felt beyond a simple drawing of someone being slapped. It feels momentous and huge. There are many more creative uses of backgrounds and framing to zero in on the characters and hammer home the awkwardness of being a teen. It’s so good you may even want to read it again to really appreciate the visual storytelling.

The title of this manga ties in to the opening and closing in a meaningful way.
Credit: Viz Media

There is one moment in the manga where Suzume’s teacher seems to be attracted to her due to her getting dolled up by a fellow classmate. It’s awkward, especially given American culture. Is this a real feeling a teacher might have? Possibly, but it’s a bit icky if you ask me and tiptoes in the wrong direction.

The melodrama, creative visuals, and expert character work make Daytime Shooting Star highly enjoyable. You’ll be sucked in by the characters and their experience coming of age.