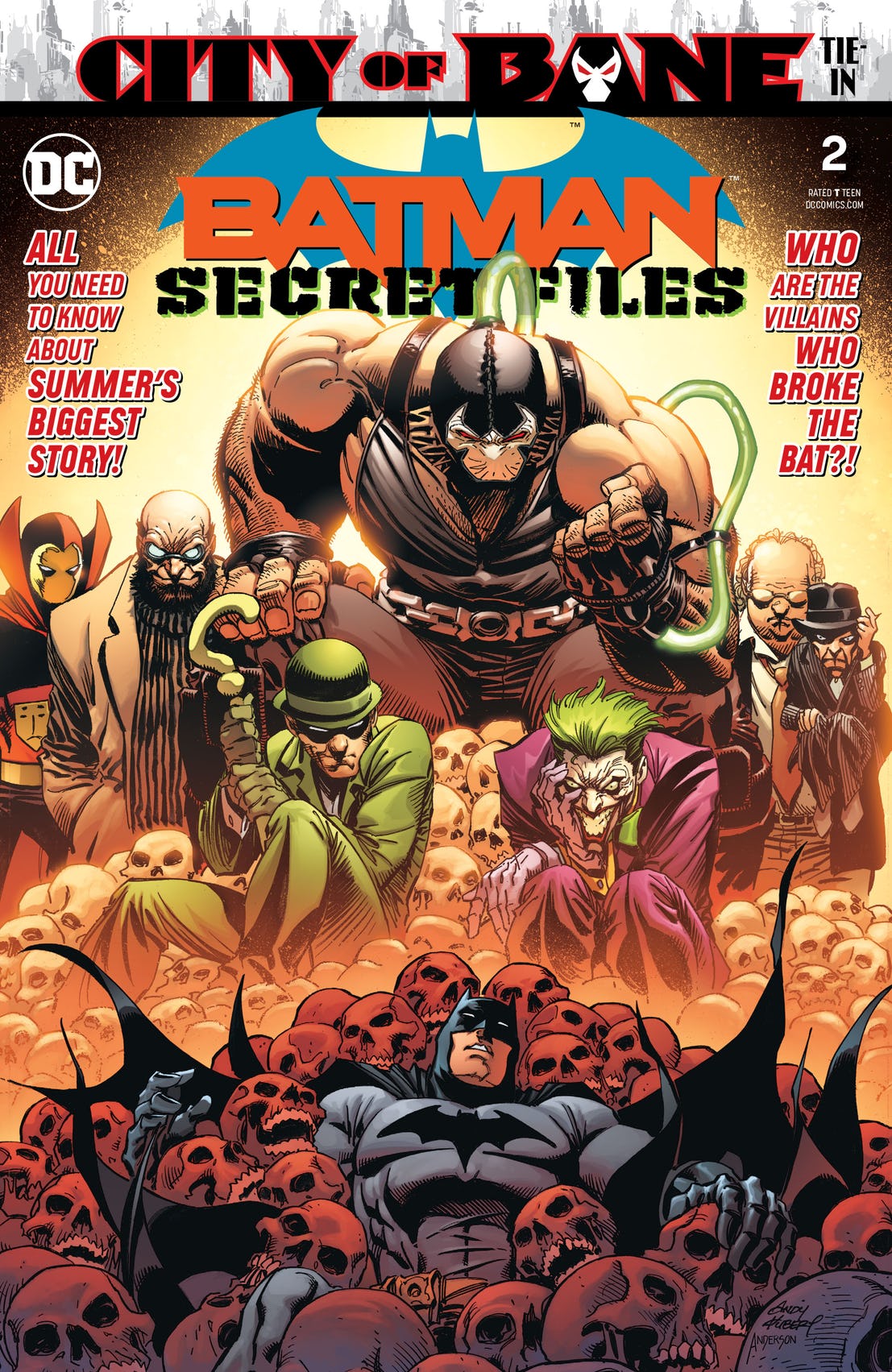 Remember this series? Back in the ancient days of October last year (the 31st to be precise) an oversized comic was released with one simple gimmick: Batman anthology. On the whole, it was pretty bad. But I’m a huge fan of anthologies regardless for the hope that there might be some shocking gems hidden among the slop. So let’s get into this “City of Bane” tie-in of short stories.

“If the Suit Fits” finds Andy Kubert behind the proverbial typewriter with Amancay Nahuelpan on art. This is a cute little ditty. Classic setup: Batman is tied up and the Joker wants to kill him, swearing that this time there’ll be no gimmicks—he’s just going to take the suit off, wear it around town, come back, beat Batman to death, then put Bruce’s writhing body in a wood chipper. Simple plan.

That central irony keeps this afloat, as does the Animated Series level of comic absurdity as the Joker gets electrocuted and cartoonishly blown up by Batman’s suit. Joker’s dialog is a little try-hard however, even referencing the Honeymooners by the end. More effective is the art, which excellently draws the Clown Prince of Crime’s ever twisting face, definitely referencing Brian Bolland (even some Greg Capullo).

Although Tom King didn’t write a story, “He Helps Us” by Collin Kelly and Jackson Lanzing basically functions as one. Psycho Pirate is giving homeless and dejected people an oasis by using the Medusa Mask. Of course, Batman ain’t having none of it.

“He Helps Us” tries to say something about grief and how people are using Psycho Pirate as a new type of drug, but it’s too obvious to say anything deeper than that. Perhaps if there was more time to explore this idea, Kelly and Lanzing could make something better. However, there are really bad moments that call that into question, like Bruce seeing his parents when the Pirate looks into his eyes. Big surprise. And when Batman overcomes that and beats the Pirate, we get blocks of text from victims outright explaining the theme.

Carlos D’anda’s art is a passable knockoff of Andy Kubert…until Batman shows up, whose anatomy is so stiff he looks like an action figure.

We get a Riddler fix in “Alone,” which has Ed Nygma being analyzed in Arkham Asylum while we see how Batman caught him. Incidentally, this was written by Mairghread Scott. The back and forth between Doctor Watham and Nygma is interesting, especially because it takes the time to delve into the campy villain’s psychology.

Unfortunately, the visuals are mainly comprised of Batman running around. The conversation between Nygma and Watham is mostly in text. It would have been so much more effective to actually see the faces of Nygma and the doctor while they verbally spar instead of generic Batman fare. That being said, Guiseppe Camuncoli isn’t the best at facial expressions, or anything for that matter, so that might be asking too much.

There are a few truly obnoxious moments in the script, like Doc Watham having to highlight a reference for us in Riddler’s puzzle. And that’s not to mention the editors popping in to plead with us to solve the riddle because the writer was so smart to include one.

At last a bright spot! “Doctor of Psychiatric Medicine” by Steve Orlando and Eduardo Risso lives up to the respective artists’ big names. A mysterious villain has detained several men dressed up in Batman costumes and put them in Saw-like traps to find the true Batman.

Psychologically, this gives great insight into the villain, who I won’t spoil. While the setup is a little confusing and doesn’t make a lot of sense if you really think about it, the fiendish art by Risso and the haunting villain’s monologues make this a less dusty secret file.

“Alethephobia” closes us off with another star-studded creative team. This time it’s Tim Seely and Patrick Gleason. Here, Batman tries to track Bane who’s gone in search of a journalist who interviewed him back when he was in prison.

There’s an absurd amount of exposition rammed down our throats through the entire thing and Gleason’s art can be so clunky it’s impossible to discern what’s happening. However…it’s a great concept that’s only fully revealed at the end, which gives even more depth to Bane. I won’t spoil it, so you’ll have to read it for yourself.

Overall, this comic is a rather stagnant capitalization on its unifying premise. Supposedly this is about the villains of Gotham when they’re allowed to run loose now that Bane has taken over. Yet, most, if not all of these, could take place at any time in Batman’s timeline.