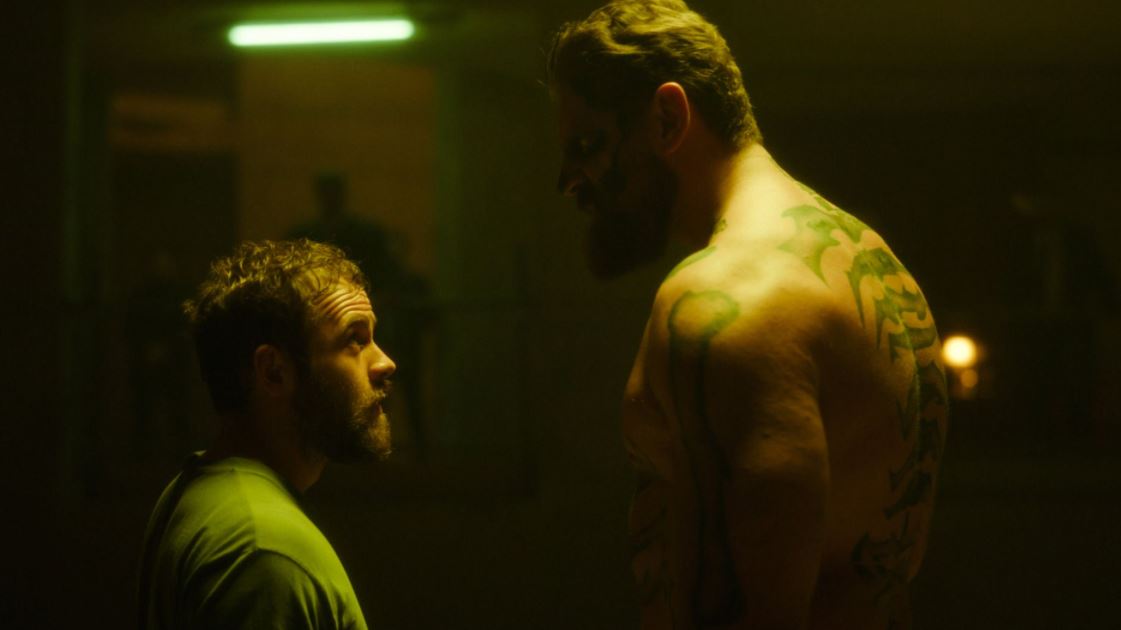 Knuckledust is a combination of other movies. The British film is a mix of Fight Club and Guy Ritchie all rolled into one violent ball. There is nothing wrong with a movie wearing its influences on its sleeve. But is this one Oldboy reference too many? The movie is about the titular fight club. A police raid finds seven levels of dead bodies and one survivor. It is up to Chief Inspector Katherine Keaton (Kate Dickie) to figure out what happened and why.

The story introduces the audience to a lot of characters. Within ten minutes, Knuckledust gives the audience enough characters to stuff an elevator, some shady rich people, an army of goons, cops, robbers, and others all get screen time. More often than not, their first appearance includes neon infused title cards. This is not a subtle movie.

Knuckledust tries its best to showcase its razor sharp wit. There are moments when the movie delivers some laugh out loud moments. An interrogation scene involving the “good cop, bad cop” routine is especially good. The flip side is since the script is constantly throwing jokes at the audience, some of them fall flat. The too cool for school dialogue does not help matters.

The main selling point of director James Kermack’s film are the fight scenes. Knuckledust is well choreographed with some brutal battles. The scenes start as quick affairs and escalate with each encounter.  Every fight is a satisfying affair that will delight audiences. Some may think there are too many well intentioned homages, however.

Knuckledust is not just a series of fights. There main thrust of the story is the mystery. The film cuts back and forth between the current interrogation and the night of the deadly fights. There are also flashbacks that give backstory into the characters. For better and worse, these moments are often unique. This is clumsily done at times, but the mystery always stays engaging.

Action movies are less about character and drama and more about adrenaline. At times, Knuckledust has trouble getting this balance down. There is simply too much downtime. The film also has a throw everything at the wall and see what sticks feel. The mystery and some great fight scenes make it an overall fun, if frustrating, watch.

HBOMax true crime doc goes deeper than any before

‘Parallel’ review: An unexpected trip to the mulitverse