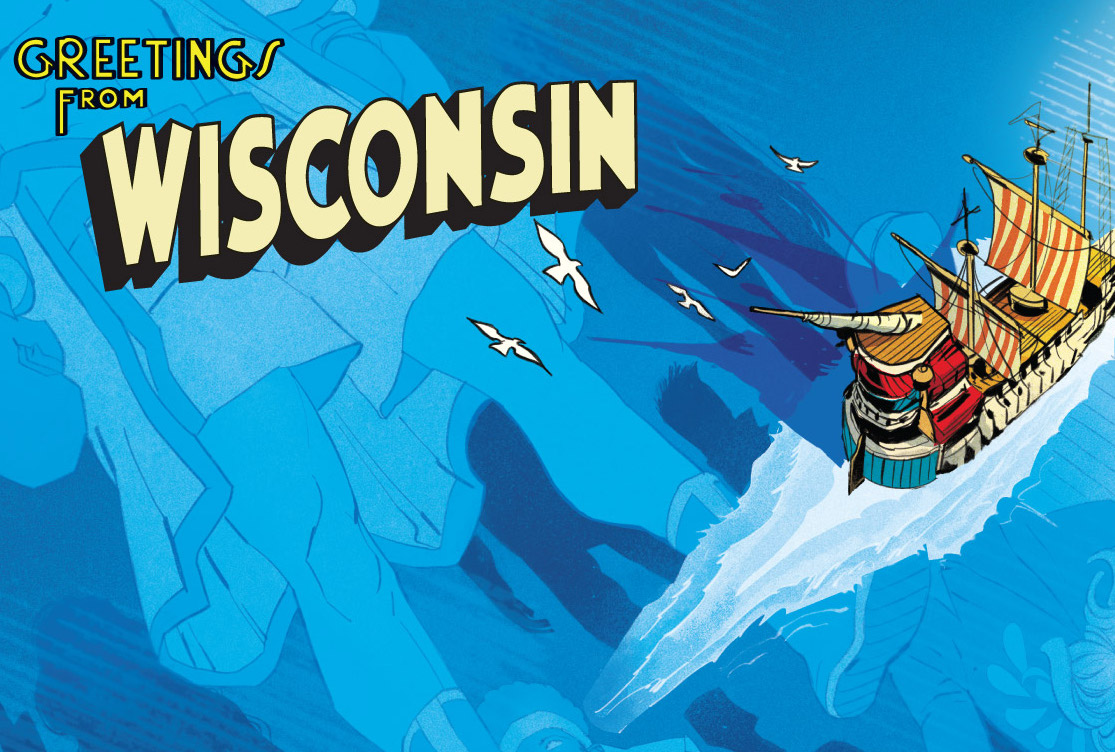 Throughout the week, Image Comics has released postcard-style teasers for the upcoming Undiscovered Country storylines. The tour kicked off at Newsarama which featured Alaska, yesterday CBR hosted Pennsylvania, and today we have your exclusive look at Wisconsin!

If you’re unfamiliar with Undiscovered Country, it’s a series about a group of characters who journey to an unknown region that was once the United States of America—a land that’s become shrouded in mystery and literally walled off from the rest of the world for well over a century. They are putting their own lives in danger so as to find a cure to a pandemic that will destroy the human race and, unfortunately for them, it’s a very deadly lost continent.

The Wisconsin postcard features Wisconsin, drawn by Giuseppe Camuncoli, which co-writer Charles Soule says “is (more or less) a direct teaser of our next Zone, POSSIBILITY, which we’ll explore in the series’ third arc. Will we see huge whale-statues? Kind of! More importantly, we’ll see a gigantic inland sea covering areas that were once the Great Lakes. Adventure ahoy!”

Check out the postcard below.

Soule added, “Undiscovered Country is a series about the American Dream that is also very much a sort of dream of America… and sometimes, obviously, a nightmare. The whole team is having a blast deepening the mythology – the third arc is where a lot of long-running series start to sing, and I think that’s where we are with the book. I can’t wait for readers to see where we’re going.”

What’s in store for readers in Wisconsin? According to co-writer Scott Snyder, pirates and gangsters! “I doubt fans will ever want to leave zone three… that is, until they realize that pirates and gangsters are the least of the crew’s worries and that there’s something even more sinister afoot here…”

Camuncoli reflected on the very different look and feel of Wisconsin now that it is covered with water. “I loved the idea of the newly formed Ocean in Wisconsin to be inhabited by floating creatures, the stuff of dreams, the American collective imaginary that created icons and legends since the beginning.”

Speaking of the postcard above, Camuncoli added, “I thought that it could’ve been amazing to show a bird’s eye view of the ship that our crew saw at the end of issue 12, sailing away while those giant statues gently swim under the surface, like a pod of whales.”

After barely escaping the deadly clutches of the Destiny Man, the expedition team has crossed over into the strange new zone of “Unity”—a futuristic world of gleaming technology and artificial intelligence. But will it be a safe haven for our heroes, or are they destined to be absorbed into the hive mind?!

Love and mutants: The best stories of the Scott Summers-Emma Frost romance

Archie to publish Rob Liefeld’s ‘The Mighty Crusaders: The Shield’ #1 for June