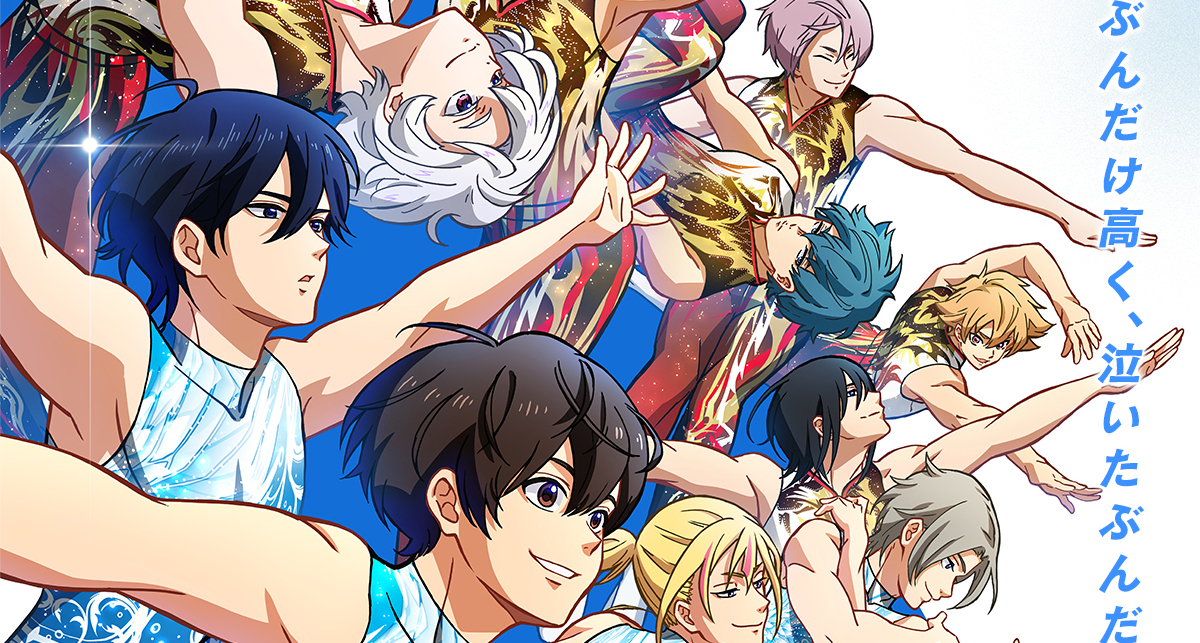 Spoiler warning: This article discusses specific plot beats and reveals from throughout Backflip!!, especially with regards to Misato’s character arc.

We’ve hit the transition point between anime seasons, so this spring’s one-cour series have all wrapped up to make way for new isekai, waifus, and isekai waifus. As such, we’ve reached the point where we can look back and ask: what was the anime of spring 2021? For me, the answer is clear: Bakuten!! (or, as it’s been localized, Backflip!!).

I came across the series very early, only a few episodes into its run. It hadn’t received much promotional buzz and the fandom didn’t seem particularly large but I heard bits of praise across Twitter and from Anime Feminist. Specifically, I heard that the animation of the rhythmic gymnastics was stellar. This was more than enough to merit at least an episode one viewing from me. From the skating routines of Yuri!!! On Ice to the intense plays in Haikyu!! and Kuroko’s Basketball, well-choreographed sports action in anime is must-watch material for me.

Even with the good recommendations going in, however, I was not prepared for how fierce the series’ premiere was. It opens with Futuba, a middle school baseball player whose team just lost what was their final game of the season, as well as his last before he graduates and moves up to high school. He stumbles upon a boys’ rhythmic gymnastics competition being held nearby and decides to watch. He’s just in time to see the Ao High School team perform, and we as viewers watch alongside him.

Holy s--t, are they awesome. The routine is so long and utterly uninterrupted— no rivals commentating from the stands, no inner monologues from the boys as they perform. Just pure, incredibly well choreographed and animated gymnastics. I think the best compliment I can give this sequence is that it successfully emulates the feeling of watching such a routine in real life. There’s the sheer wonder of watching the athletes do things physically that most people could never dream of as they tumble, leap, and of course, backflip. The choreography syncs up with changes in mood and intensity throughout the music perfectly, and a variety of angles are used to show off both impressive individual feats as well as the team as a whole. By the end I was left in awe at what an amazing job the animators did, and I, like Futaba, was instantly obsessed.

And so Futaba forgot all about baseball. (Crunchyroll)

Futuba then decides to attend Ao High, where he joins the team that took his breath away. All four members from the prior performance (Watari, Onagawa, Tsukidate, and Schichigahama) are still there, and one other first-year joins as well: Misato, a gymnastics prodigy who Futaba happened to be sitting beside at that fateful competition months prior.

Misato and Futaba’s relationship is one of the most interesting aspects of the series. Futuba, though a complete beginner, is earnest and enthusiastic, emotionally vulnerable from the jump. Misato, meanwhile, is much more withdrawn and takes time to warm up to his teammates and truly fit in with the team. It would have been easy to slot Misato into the roles of Futaba’s rival and the mysterious possible bad-boy of the group. This possibility is quickly turned on its head and rejected, however, as Misato plays a pivotal role in helping Futaba improve as a gymnast. Not only that, but his aloofness is revealed to stem from feelings of responsibility and guilt due to his home life and a past accident on his middle school team. He’s not a jerk with a heart of gold at all; he has a heart of gold but just isn’t always very socially adept. I love a good set of rivals as much as the next guy, but this subversion of expectations was still enjoyable to watch unfold.

The rest of the core cast is likable as well, though they play second fiddle to the first-years. My favorite character is Watari, a green-haired second year who is simultaneously serious and intimidating while also being the source of the anime’s best comedic relief. He’s incredibly intense, obsessing over samurai movies and classic images of manliness. That intensity is also reflected in his approach to gymnastics, and in some ways he seems the most devoted even if he is also a bit of a fight-picking dolt. Regardless, his heart is in the right place and I love him. The other main standout of note is Shuusaku, the team’s coach. His backstory touches on injury and the sudden upending of athletic ambitions. There’s thoughtful material explored with regards to how even people’s poor decisions are sometimes the right ones for them to make emotionally speaking, and how this facilitates growth and acceptance.

The anime is short; it’s only twelve episodes long, and sport-wise we only get to see a handful of competitions. The rest of the screen time is split between practice sessions and character exploration. Impressively, nothing ever feels like filler. Episode five, which consists solely of a long game of Hide and Seek after practice, is one of the best episodes in the entire series. Besides being a comedic high point, it manages to flesh out virtually all the main characters and make them all the easier to root for when the time comes for them to compete.

I don’t want to discuss the final two episodes in much depth plot-wise lest anyone be spoiled before watching them, but they end the series on a fantastic note. As far as the final gymnastics performances go, they share the sense of wonder that defined the series’ opening while also differing from it in key ways. There are significant distortions in shot compositions and how the athletes are framed that serve multiple important functions. Not only do they heighten the sense of drama and what’s at stake now that we love this team, but they also feel much closer and more intricately involved. In this way they reflect Futaba’s journey wherein he started as a separate observer and ended as a member of the team, working hard and pushing himself to his limits on the mat. The amazing athletics remain amazing but they also become more visceral, more human and passionate.

It’s perhaps this feeling of humanity that most sticks out about the series compared to every other anime I watched this spring, and even among other sports anime. The Ao High team loves not only gymnastics, but each other. Much less time is devoted to rivalries than to internal conflicts, which the characters then offer each other comfort and support through. It’s not that there’s literally no interpersonal conflict, but it feels trivial compared to how important the team members’ inner problems and triumphs are. In this way, Backflip!! depicts an idealized version of teamwork masterfully.

All in all, there was no other anime this spring that I think I’ll remember half as fondly as this one (and I liked plenty of other shows). Any thoughts I have about what didn’t fit within the episode count are based in a desire for more (“Oh, it would have been fun to see even more of this…”) rather than a feeling that what we got was actively not enough. It’s the eternal craving for more of a good thing, a craving that will be satisfied: a sequel movie has been announced. Until then, though, I’m more than grateful for what the series has given us thus far.

‘Loki’ S1E5 “Journey Into Mystery” has fun with variant varieties