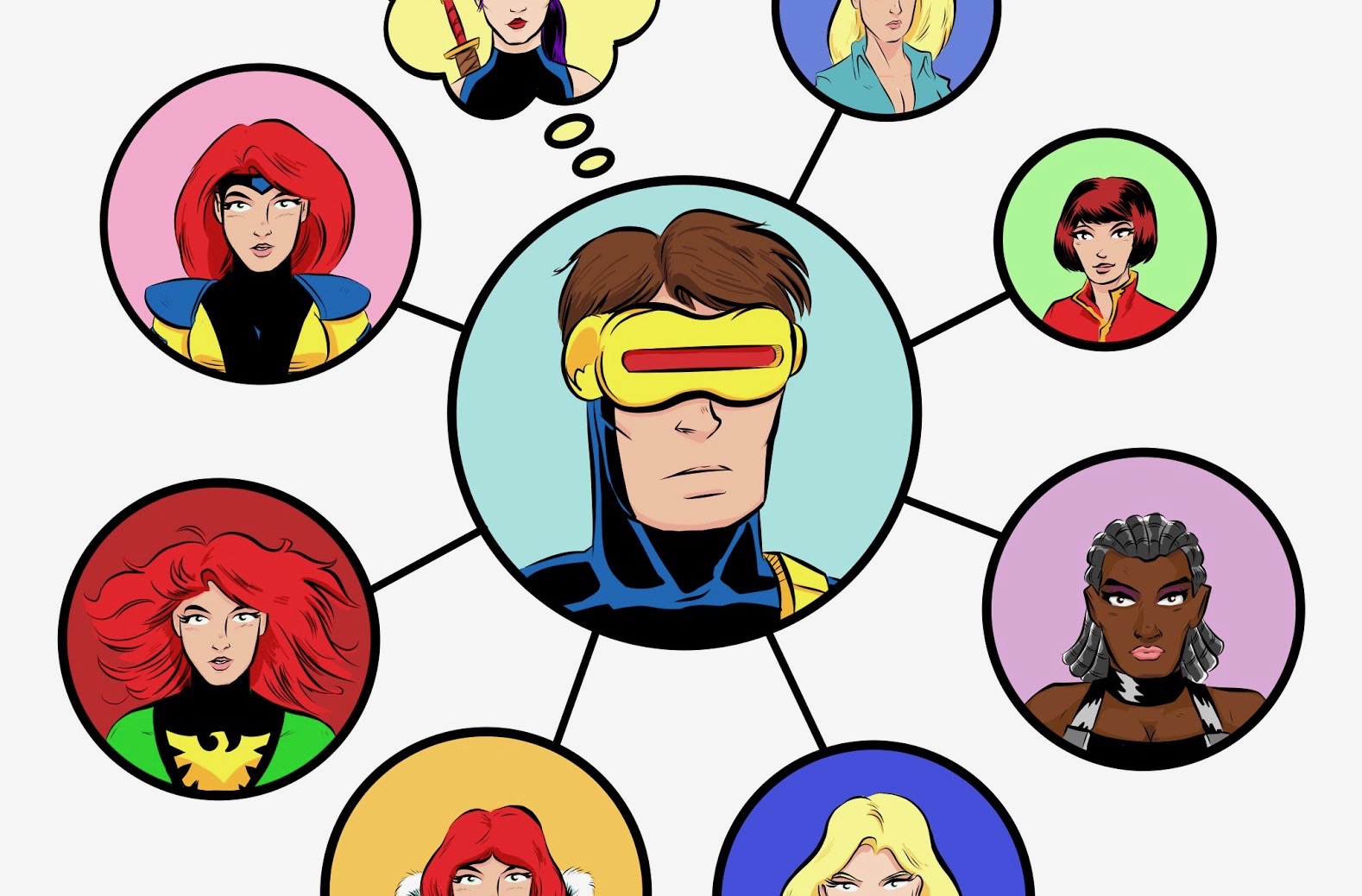 On Episode 368 of the “This Week in Marvel” podcast (November 16, 2018), the eXcellent X-Men Group Editor Jordan D. White proposed the impossible: A giant infographic of every canonical X-kiss from X-Men history. And while a truly exhaustive study of every kiss is probably outside the realm of plausibility, this year, I’m going to try to capture the notable kisses of equally notable X-People with a series of illustrations I’m calling X-Men “Smooches.” Since it’s Cyclops Week at AiPT!, I’m here to share my Cyclops “Smooches” infographic and rank the loves of Mr. Scott Summers’ life.

Before we get to my ranking, a quick caveat: For the purposes of this series (and so I don’t go completely insane), only 616 Scott Summers Smooches were considered, so no X-Treme X-Men Storm smooch, and so on.

With that out of the way, let’s get to it! How will the loves and likes of Scott Summers compare? And who will reign supreme as the love of Cyclops’ life?

Despite the fact that I just said no alternate realities, in the aftermath of “Age of X,” Frenzy and Cyclops came to terms with the fact that their long marriage in Legion’s alternate reality didn’t really happen. Frenzy was more than eager to stay with Scott as she decided not to have her Age of X memories erased. Scott, on the other hand, was more than eager to forget and get back to Emma Frost, his partner at the time, and they went their separate ways.

With Chris Claremont’s history of working on Iron Fist at the same time as Uncanny X-Men, it makes sense that Scott’s rebound after the apparent death of Phoenix was none other than Colleen Wing. Despite Colleen definitely being into Scott, writer Jo Duffy brought Wing back to the pages of Power Man and Iron Fist and Colleen and Scott never saw each other again.

In the most forced of Cyclops’ romantic encounters, the early ’90s found Scott ogling Psylocke’s swimsuit body on the regular, much to Jean Grey’s consternation. This subplot also served as a lead-in to the baffling Kwannon reveal, but this “relationship” ultimately culminated with Betsy licking motor oil off Scott’s face and Scott being so embarrassed by it all that he ran off to Alaska to visit his parents and hang out with Mr. Sinister. So this one counts as a mere crush that ended before it began.

Fellow Cyclops Week contributor Trent Seely recently counted the number of times Cyclops quit the X-Men and he’s pretty sure it was eight. Sometimes it seems like Cyclops quits the X-Men more times than Sunfire, and it was on one of those hiatuses that Cyclops boarded the ship Arcadia, captained by the lovely and adventurous Lee Forrester. Lee and Scott had a romantic fling that started after a team-up with Man-Thing (yes, Man-Thing) and ended up with the pair shipwrecked on Magneto’s secret island that “Jay & Miles X-Plain the X-Men” have affectionately dubbed Octopus-heim. Strangely enough, Lee broke it off with Scott when she found out he was in the X-Men because she didn’t want to be involved with a superhero, but ironically then ended up falling for Magneto after he saved her from death by sharks!

What to do when the woman you think is the love of your life sacrifices herself in the blue area on the Moon? Why, bump into a clone of your former love (courtesy of the villainous Mr. Sinister) who just so happens to be a world-class pilot while on “retirement” from the X-Men! Maddie Pryor not only became Scott’s wife but the mother of Nathan Christopher Charles Dayspring Askani’Son Summers, all for Scott to abruptly leave her and his newborn son the second he heard Jean Grey was still alive to form X-Factor. Things did NOT work out well for these two when Maddie evolved from an honored member of the Aussie X-Men lineup to the terrifying Goblin Queen who led a demon horde to haunt New York City. After her death in “Inferno,” Madelyne’s memories became merged with Jean Grey’s, but this was definitely one of Scott’s exes who deserved far better.

When Jean Grey and Scott Summers reunited in the All-New, All-Different era for a snowy Christmas date, Scott barely got to act on his feelings for Jean before they were attacked by Sentinels and Jean was pulled into space by the evil Stephen Lang. While the X-Men assumed that the woman who emerged from Jamaica Bay after a terrifying spacecraft crash was Jean, she was actually the cosmic entity known as the Phoenix. Scott picked up where he left off and fell madly in love with this avatar (which, just so everyone is on the same page was supposed to be Jean until Kurt Busiek and John Byrne stuck their noses in for one of the most insane retcons in comics history). When the Phoenix sacrificed her own life, Scott, and in turn us the readers, were inconsolable believing that Jean was no more. Looking back on this era, knowing that Scott was really infatuated with a giant flaming bird assuming the personage of his girlfriend whom he only went on a single interrupted date with, we can see the inauthentic nature of the love story, even if that perspective was forced on us editorially. Luckily, the Phoenix’s memories were later inherited by the real Jean, so the history of this little space-scam became another chapter in their real partnership.

As noted, Jean Grey was the ultimate amalgam of Scott’s past loves. She was the Silver Age teen he crushed on, the cosmic force he fell head over heels for, the essence of her clone and Scott’s ex-wife, and the resurrected and powerful Gold Team leader that Scott finally married and promptly headed into future with on their honeymoon to raise their son in a far-flung dystopia ruled by Apocalypse. Scott and Jean were the quintessential X-couple, admired and celebrated by their colleagues who were willing to follow both of them into combat time and again. Never mind that thanks to some Claremont retconning, Jean is always a little hot for Canadian immortal Logan James Howlett, or that Scott perhaps stares at Betsy Braddock too long. Scott and Jean were the equivalent of the high school sweethearts who grew up to live happily ever after in the superhero suburbs. Unfortunately, if there’s one thing you can always count on in X-Men, it’s that this particular redhead always gets it. For all the time they spent together, they spent as much time apart, separated between this world and the afterlife. Their relationship was based as much on longing and separation as it was a legitimate partnering of equals. Scott was ultimately more likely to be pining for his dead love than doting on her, making her the runner-up in today’s ranking. I know this will be sacrilegious to some X-Fans, but hear me out.

True love is a meeting of the minds, and the best relationships are partnerships between individuals who share an equal respect for each other. As Scott Summers grew from pupil to the leader of the X-Men, ultimately replacing his mentor and father figure Professor Charles Xavier, he evolved into a shrewd tactician, a general whose unlimited back-up plans meant that he tirelessly troubleshot every possibility to anticipate any and all threats. In that evolution, Scott Summers needed a partner that shared not only his noble leadership qualities, but his pension for obsessive problem-solving and examining the calculus of any given crisis. And that person was the true love of Scott Summer’s life: Emma Frost. Emma may have seduced Scott to start their relationship, but it was still Scott’s choice to cheat on Jean with Emma. After Jean’s death, Scott evolved from team leader to master of a Utopian military island to a god-tier villain and a borderline revolutionary terrorist. Standing with him through all of it was Emma, his partner in crime regardless of the era to actively achieve their collective goals. Emma served the school as a co-headmaster and teacher, and continued that mentoring role even when they were living in an underground bunker in their final years when they weren’t together.

Scott and Emma’s love wasn’t one that fits the typical mold of Marvel commitment. There was no wedding special, there were no special issues devoted to the indecisions of forming a family. But despite bucking the formula, they were true to each other in ways no other Marvel couple ever were. They were sophisticated, mature, and productive in their love. Together, Emma and Scott led the X-Men as equals for 15 years of X-Men publishing history, which means that even if we count the beginning of X-Factor as the start of Scott and Jean’s adult relationship, Scott may have spent more of his life with Emma than he did with the real Jean (difficult to really quantify considering Marvel’s sliding timeline and the collective consciousness of Jean Grey). The “Schism” event brought with it the idea that Cyclops and Wolverine were positioned to become the new Professor X and Magneto locked in ideological contrast and combat over a geographic divide. But a more optimistic reading of X-History is that Scott and Emma filled the absences of Xavier and Magneto, and instead of warring, they fell passionately, faithfully, supportively in love, complementing each other’s visions of the future of mutantkind and acting in kind to train new generations of mutants.

It’s a testament to Emma’s love for Scott that she became so unmoored after his death, forging his corporeal form for a time and only recently refocusing her strength to become the Black King of the Hellfire Club. As Emma once had the odd opportunity to address the ghost of Jean Grey: “Your nightmare… was my love story.”

Want more X-Men “Smooches”? Become a supporter of Adam’s at patreon.com/adamreck ! For just $5 a month, get monthly “Smooches” infographics and daily pencil sketches delivered to your inbox!

In this article:Cyclops Week, feature, Marvel, X-Men
Up Next: