'The Lady and the Dale' review: Cons, trans rights, and Tucker Carlson's dad is a transphobe 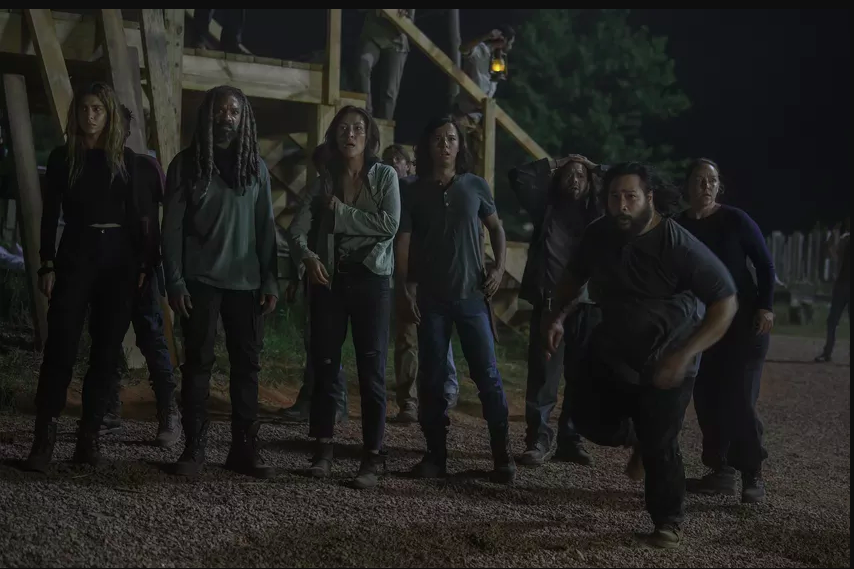 Last week, Carol got hooked on caffeine pills and started to hallucinate–except for the stuff that was important to the plot. That was real.

This week, the tension caused by the Whisperers starts to boil over.

The episode opens with montage set to “Heaven I Know” by Gordi. We see Daryl being a studly caretaker, Lydia looking lonely, and Magna and Yumiko in a steamy basic cable sex scene. We eventually land on Ezekiel, who looks like he’s constipated before a tree randomly falls and knocks over part of the Hilltop’s defensive wall.

As you might expect, a decent number of the Hilltop residents think that the Whisperers are behind this. As if to drive the point home, walkers can be heard groaning and gathering nearby.

Back in Alexandria, Lydia is getting bullied by a trio of jerks named Gage, Alfred, and Margo (yes, I had to look up who they were) because of who her mom is. Lydia runs and hides, but is found by Negan, who actually gives her some pretty sound advice about dealing with bullies without resorting to violence. Unfortunately, his after school special moment is cut short when Daryl shows up and tells Lydia that hanging out with Negan is a bad idea while pulling her away.

Meanwhile, Michonne rides toward Hilltop with Judith, Eugene, and a few other main characters. During a mother-daughter conversation, Judith astutely points out (via a comparison to her brother) that the Whisperers might be trying to wear everyone out before attacking them. Michonne agrees that this is a good observation.

Speaking of observations, Michonne just happens to see Ezekiel wandering off by himself in the distance. She catches up to him just as he’s about to…umm…jump into a lake to kill himself? I’m honestly not sure. Whatever the case, she stops him and offers comfort. Ezekiel responds by telling her how sad he’s been lately and how life doesn’t seem worth living anymore. He then decides this is the perfect time to kiss her.

Thankfully, Ezekiel apologizes and Michonne is able to brush off his gross advance as grief-fueled weirdness. After agreeing that they are both too stubborn to work as a couple (?), Michonne shares how she was in a similarly dark place as him. She got out of it by continuing to move forward. Not exactly groundbreaking advice, but still good.

Michonne then makes Ezekiel promise that next time he feels this hopeless that he finds her first.

Back in Alexandria, Lydia decides to mess with her trio of tormentors by sitting down at their lunch table and gutting a squirrel. Daryl pulls Lydia away and advises her that she “can’t be doing s**t like that,” which is an early contender for Understatement of the Century.

His point is proven when the trio finds Lydia later that night and surrounds her. They give her a chance to run off, but she says that Alexandria is her home and that THEY are her people. The trio responds to this olive branch declaration by kicking Lydia’s ass.

Thankfully, Negan soon shows up and saves Lydia. Unfortunately, he somehow manages to throw Margo against a wall so hard that she dies. As you can probably imagine, this put Daryl in a tough spot. On one hand, Lydia was unjustly attacked and Negan was doing the right thing. On the other hand…it’s Negan.

The townspeople gather and get angry about Negan killing someone to defend Alpha’s daughter. While all this is happening, Siddiq starts suffering from psychedelic PTSD.

Back at the Hilltop, Magna and her crew are struggling to fight off the walkers. Yumiko orders a retreat, which ticks off Magna because she thinks she can take on an entire horde of walkers by herself.

The group falls back behind the wall, which is promptly toppled by the horde. Just when it seems like all hope is lost, Michonne’s crew rides in and starts kicking ass–especially Judith. Much as this show makes me roll my eyes sometimes, that kid is definitely a bright spot.

Later that night, Michonne uses the ham radio to check in with Daryl. He fills her in on the Negan drama. Michonne tells him that they must keep Lydia alive because her continued survival the only reason Alpha hasn’t killed them all yet. Despite this being a painfully obvious statement, it was treated as some sort of huge secret/revelation.

Back in Alexandria, Daryl has a heart-to-heart with Carol which pretty much comes down to ‘Being in charge and doing the right thing is tough.’ He also speaks with Negan, who points out that Daryl knows he did the right thing, but is scared because the townsfolk are ready to get the pitchforks over him killing one of their own.

Meanwhile, Gabriel and Aaron listen to the surviving Douche Trio, who predictably lie about what happened. Aaron thinks they should kill Negan anyway because Negan is evil. Daryl says they shouldn’t because Negan was doing the right thing. The deciding vote comes down to Gabriel, who says he will sleep on it before making a decision.

The next morning, Gabriel goes to visit Negan only to discover that he’s gone. Lydia confesses that she is the one who let him out. She also puts herself in Negan’s old cell, explaining that she feels responsible for all the awfulness that has happened lately and that she feels safer in cell than living free in town. As if that weren’t heartbreaking enough, Lydia also points out that the town was ready to kill both her and Negan despite the fact that they hadn’t done anything wrong…which makes them a lot more like the Whisperers than Daryl (or anyone) would like to admit.

The next day, Michonne decides to take a crew to Oceanside. Luke asks if he can go so he can see the woman he’s crushing on. Eugene asks if he can stay behind at Hilltop because he wants to get over Rosita.

After deciding who’s going and staying, Yumiko goes to find Magna, who is still angry that she stopped her from trying to take on a whole zombie horde by herself. Magna ends their brief argument by saying “you’re not my lawyer anymore” and storming off, which is also how I end any argument where I know I’m being ridiculous and want to confuse the other person.

The episode closes with a cheesy montage of everyone leaving, Yumiko looking sad about Magna being mad at her, and a spray painted sign saying ‘Silence the Whisperers.’

So credit where credit is due: I really like this week’s subplot with Negan and Lydia. Whether you believe his redemption arc or not, he was doing the right thing with regards to Lydia. It’s also interesting to watch Daryl have to struggle with the tough choices a leader has to make rather than his usual black-or-white view of how things should be handled.

Add in the scene of Judith opening up a can on the Hilltop walkers, and you’ve got yourself a fairly good episode.

Unfortunately, we also have Ezekiel once again needing a pep talk from Michonne to keep going. This time, it takes place after he’s randomly spotted during a bizarrely staged suicide attempt. Don’t get me wrong–I’m glad he didn’t go through with it. But if he was really going to do it (which wasn’t entirely clear), then why ride your horse out to a river and jump when there are plenty of other ways in this dangerous world to off yourself …unless it was so another main character could randomly cross paths with him and create a really awkward kissing scene.

Also, what the heck is Magna’s problem? I know we’re supposed to be more interested in the lawyer line, but I want to know why she’s so mad that Yumiko told her to fall back when it was clearly the only option they had. Is that really a hill for anyone–or a relationship–to die on?

Ah well…at least we (hopefully) get to see what a free range Negan is up to next week.

The Walking Dead Season 10, Episode 4 'Silence the Whisperers'
Is it good?
I really like this week's subplot with Negan and Lydia. Whether you believe his redemption arc or not, he was doing the right thing with regards to Lydia. It's also interesting to watch Daryl have to struggle with the tough choices a leader has to make rather than his usual black-or-white view of how things should be handled.
The subplot with Negan and Lydia's fate vs. Alexandria's distrust/hatred for both of them is really interesting.
It's neat seeing Daryl having to work as a leader instead of a blunt tool of right and wrong.
Judith is awesome.
The recurring 'Ezekiel is sad' subplot is getting old.
Magna's anger at Yumiko seems incredibly contrived/ridiculous.
6
Average