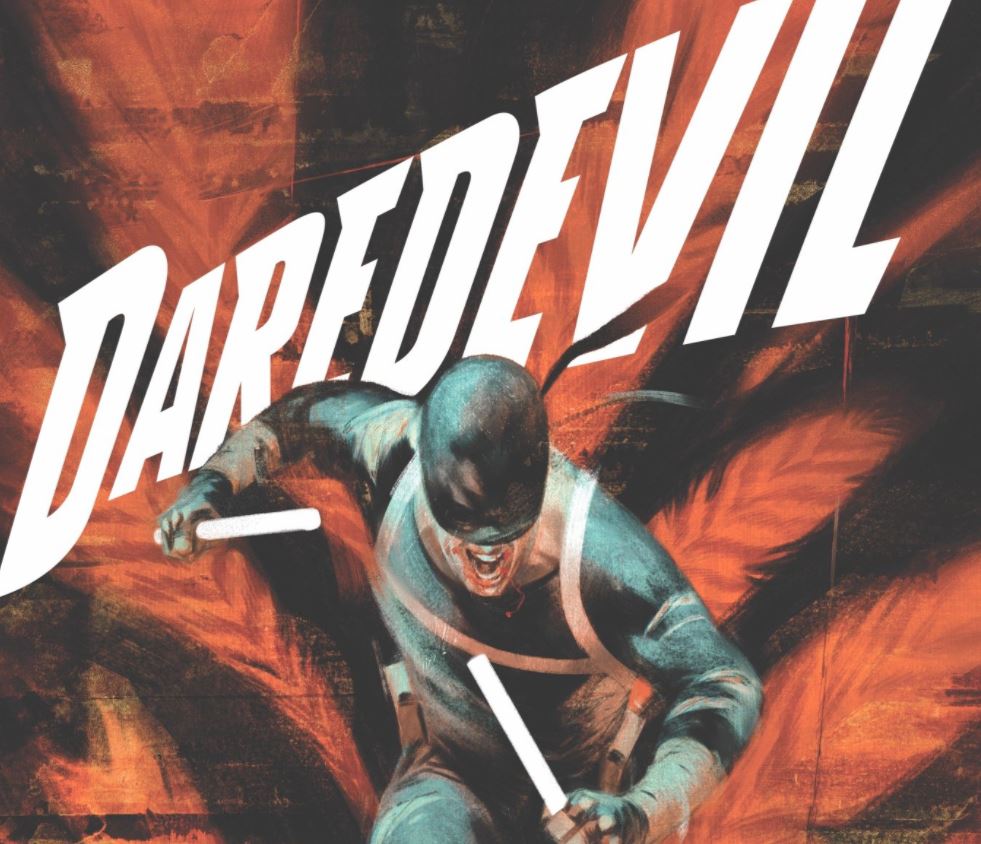 It’s a debate many comic collectors have had with themselves: should I collect all the back issues, or just buy the trade paperback? Most times, I find the trade is the better way to go, but sometimes, including this run of Chip Zdarsky’s take on Daredevil, I find myself getting both the issues as they come out AND also getting the trades as a way to lure my friends into this world that Matt Murdock finds himself in.  These are amazing stories that pit all the characters against their own personal hells while they are also dealing with each other.  We get plenty of that in this fourth volume, End of Hell.

All that incredible drama from issues #16 – #20 of the current run is wonderfully drawn by masters like Marco Checcetto and Jorge Fornes with eye-catching colors by Nolan Woodard and Mattia Iacono, wrapped up in covers by Julian Totino Tedesco.  This team is delivering some astonishing comics, and I have a very strong feeling this will be a run that people will be talking about for years.  The story feels just perfect as a way to mix longtime fans of the comics, fans coming from the Netflix show, and also new fans looking for bold comics. This trade finishes up “year one” from Chip and company, so let’s take a look at my reviews of the individual issues:

Issue #16:  “Great way to start off the new decade with beautiful art and amazing drama in the world of Daredevil. I just love the moment of Matt facing what he can do with his powers but also what it means due to his faith.  Jorge Fornes just kills with his style. Art of this caliber can carry any comic; thankfully it doesn’t have to alongside great writing.” 10/10

Issue #17: “Matt is trying his hardest and it just seems to be coming up short, but the drama is worth it for us readers.  A touching scene opens up the issue – do yourself a favor and read it again.  Matt manages to escape their guards and the wild part is they decide to call in their specialist to help with this problem…I won’t tell you who it is, but now the sequences on some of the covers are starting to make sense and this will be a wild confrontation.” 10/10

Issue #18:  “This latest issue features Matt, but it consists largely of a lot of setup that is building to a high crescendo of action that probably won’t be good for Hell’s Kitchen.  The other characters get a great spotlight and some of the situations are resolved, but sadly there will be a situation that has become rather permanent.  Chip Zdarsky is putting out scripts that will capture you with the intense story.” 10/10

Issue #19:  “The two-part mini arc, “Inferno,” begins in this issue of Daredevil, and Chip Zdarsky and Marco Checchetto are pulling no punches as Hell’s Kitchen starts to look like hell itself.  Things are really starting to come together in this current run in the series, and the drama from issue #1 is starting to pay off.  Fantastic eye candy by Marco Checchetto and his dynamic layouts.” 10/10

Issue #20:  “Daredevil is back and this issue hits hard. What a return to the Man Without Fear, in an issue where you see people stand together full of action. Matt’s journey of the soul is on a great path to redemption.  The art and colors create vivid action sequences that bring out the heroism in everyday people.”  10/10

I have been following the adventures of Matt Murdock for a couple of decades, and this is some of the finest Daredevil comics I have ever read.  Zdarsky, Checchetto, and Fornes along with the rest of the crew are creating some tremendous stories. The trade collection isn’t loaded with extras, but you do get a cover gallery of variant covers from the included issues.  You can pre-order it now from Amazon, or wait for the release date of October 13, 2020 and get it at your local comic shop.

‘Daredevil Vol. 4: End of Hell’ review
Daredevil Vol. 4: End of Hell
Fantastic collection of issues that will have you gripped with excitement and concern for these characters. If you enjoyed the Netflix Daredevil show, this will feel like a cliffhanger ending of what could've been season 4.
Reader Rating0 Votes
0
Chip Zdarsky has taken the characters of Daredevil and put them on a wild ride, and we see the culmination of his "year one" as writer come to a close
Jorge Fornes, Marco Checchetto, Nolan Woodard, and Mattia Iacono bring some amazing artwork to this series
This is a set/collection of comics that deserves space in your bookshelf, as you be coming back to revisit this tour of inner hell by way of Daredevil
This is a simple reprinting of issues #16 to #20 with a basic variant cover gallery, some more extras would've been nice
10
Fantastic
Buy Now
Comixology/Amazon