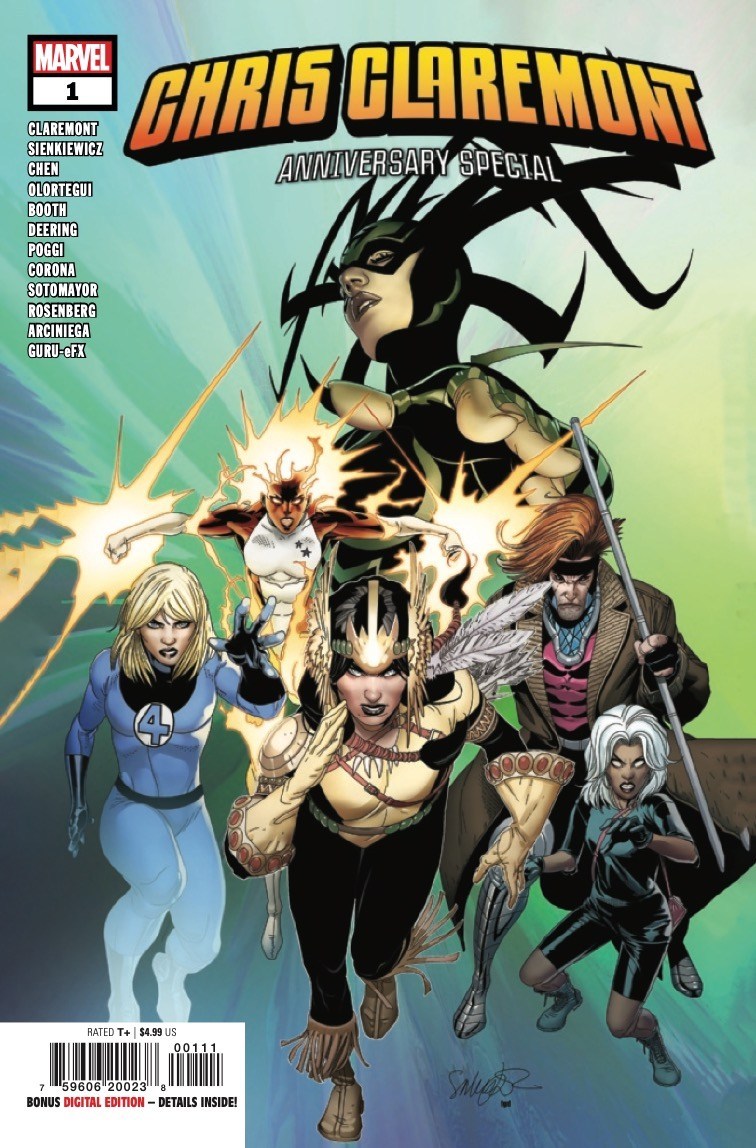 Something about our current news cycle has turned my thoughts toward the morbid recently. I’m far from alone in that regard, which is maybe why comic books—the ultimate symbol of collaboration, transience, nowness—have been such a balm for me and other critics and fans.

Death is never far from the minds of the X-Men or their longtime steward Chris Claremont, who returns to the stands this week with Chris Claremont Anniversary Special, a comic that certainly lives up to its name. All of Claremont’s favorite characters are back: Rogue, Carol Danvers, the Starjammers, Gambit, and a certain Cheyenne warrior named Danielle Moonstar, who is the undisputed star of this issue and someone who—famously!—fought Death.

For Moonstar fans, this issue is a treat. Claremont sets up a thematic battle between life and death as death goddess Hela sends Dani through space and time to battle the Shadow King. The journey finds Dani (and her horse Brightwind) revisiting some of Claremont’s most iconic moments in continuity. In San Francisco, Dani sees Rogue fight Carol Danvers in a send-up of that classic scene from Marvel Super-Heroes #11, but this time Carol’s essence is not absorbed into Rogue. Switching from her Binary form to the modern Captain Marvel costume, she declares, “Rogue stole my life. I’ll never let her—let anyone—do that to me again!” The wardrobe change isn’t just a nod to Carol’s modern reinvention under Kelly Sue DeConnick; it’s a reminder of Claremont’s abiding affection for a character he helped to develop over time—and who, like so many of the heroes he shepherded at Marvel, is now a silver screen star.

The X-Men, outside of Storm and Gambit, are almost an afterthought in this issue, which gives Claremont time to spend with the non-mutant characters he grew to love at Marvel. The Fantastic Four, whose adventures he wrote following a much-anticipated return to Marvel in the late-’90s, receive an extended treatment alongside alternate-universe counterparts like Valeria Fen, who Claremont introduced in his late-aughts New Exiles run.

Thankfully, the reunion tour extends to the creative team, in addition to the characters on page. Salvador Larroca, who drew much of Claremont’s X-Men work since 2000, is the cover artist and letterer Tom Orzechowski, whose era-defining tenure on Uncanny X-Men set an industry lettering standard, makes his usual magic, including in one amazing panel where Reed Richards gets—spoiler alert!—aggressively tickled.

Pencilers Brett Booth, Sean Chen, and Diego Olortegui turn in impressive work, but longtime X-fans will be spoiled at the sight of linework that could only belong to Bill Sienkiewicz, whose art bookends this oversized story. Claremont teamed up with Sienkiewicz as recently as two years ago for their New Mutants: War Children one-shot, but it’s still an absolute joy to see these old collaborators together again, especially on a character like Dani Moonstar.

Nearly 40 years after her creation, Moonstar has had a banner year in the comics, assuming a prominent role in Vita Ayala’s New Mutants and starring in a terrific one-shot story from Lipan Apache writer Darcie Little Badger. She also was in a movie—which you probably didn’t see—that, for all its many flaws, featured an inspired performance by indigenous actress Blu Hunt.

Claremont’s anniversary special is not the most narratively straightforward comic he’s written and, to be fair, it’s not really trying to be. Why is the Shadow King doing what he’s doing? Is any of this in continuity? I’m not sure these answers matter as much as the emotions one feels seeing Moonstar in full Valkyrie gear, astride Brightwind, riding into battle.

That scene left me thinking, not of Dani, but another Claremont original: the Japanese mutant Yukio, who once said to Storm: “Life is the ultimate adventure, Wind-Rider, and death is the prize that awaits us all.”

Storm knows death, as does Dani, and their moment together in this anniversary special is a quiet, devastating scene from a writer who spent decades turning four-color characters into complex, emotional beings. The context is silly, the result is contrived, but it works.

For Storm, Dani Moonstar, and all these other characters who owe their legacy to Chris Claremont, life is adventure they are still living—and all of us are still reading.

In this article:Chris Claremont, Marvel, X-Men
Up Next: