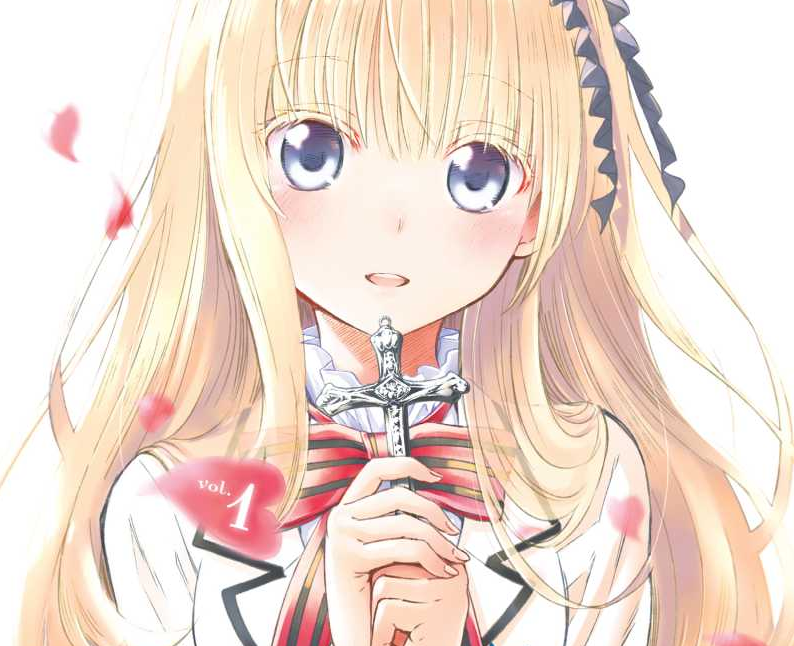 With the recent arrival of both the manga in print form and the new anime adaptation that hit TV in Japan, I feel it’s time to check out Boarding School Juliet and see what it’s all about. Is it good?

According to the official description by Kodansha Comics:

At Dahlia Academy, a prestigious boarding school attended by students of two feuding countries–the eastern Nation of Touwa, and the Principality of West–Romio Inuzuka, leader of the dorms’ Touwa first-years, wishes for a romance that can never be. For his ladylove is none other than his arch-enemy, Juliet Persia, leader of the dorms’ West first-years! Is Inuzuka ready to risk it all to confess his feelings? And even if Persia somehow agrees to go out with them, how long can they keep a forbidden relationship under wraps?!

Going into Boarding School Juliet, I figured I was getting into a new shojo series. I just took a look at the cover with the soft filter over the cutesy girl and title and just made an assumption. Stepping into it, I was rather surprised to discover that this was, in reality, a shonen romantic comedy. Its story definitely leans more into the comedic, harkening back to and/or taking familiar elements from other successful series, such as Nisekoi or Yamada-kun and the Seven Witches. But it also does some of its own things as well, giving it its own spin and identity. When all is said and done, Boarding Juliet School turns out to be a rather sweet, silly experience.

As a whole, I found Boarding School Juliet to be a perfectly enjoyable, if average-ish romantic comedy. Some of its biggest strengths right off the bat were its setup and its story so far. Inspired, obviously, by Romeo and Juliet, it’s the tale of a couple in love trying to be together or have these touching moments to bond. Unfortunately for them, they are constantly interrupted in one way or another by the rivalry and ongoing war between their dormitories. In any other series, this would have been about the two not liking each other at first, but finding an initial spark that slowly grows with tons of will-they or won’t-they situations to be drawn out for who knows how long. But in a rather refreshing move, the two are an official couple after the first chapter and for the rest of the time it’s just funny situations that the two get into. I like this switch-up a lot since it gives a sort of stale, tropey genre a new fresh coat of paint with potential for good jokes and different scenarios.

On the flip-side, I found the backstory and setting for the series to be undeveloped at this stage. The school itself barely exists, with us never really seeing any of the classes take place as most of the situations are kept to just the school grounds. The whole concept of the two rival nations that’s so heated it makes the dorms want to fight each other is not expanded on in any significant way. They’re just feuding and each nation has its own hierarchy and ruling that’s just told to us without any details. Even Juliet’s backstory and motivation, which tie into her country’s own rules for classes, is dealt with so little that I forget it’s even there. I’m sure all of this will be developed as time goes on, but it disappointingly feels like an afterthought here.

Now let’s talk about our two leads: Romio Inuzuka and Juliet Persia. Our male lead doesn’t have a lot going for him. He’s earnest and open about his feelings with Juliet, desperately trying to make things work between them. He’s a bit dim at points too, but that’s it. I wish there was more to him, since he comes off like a lot of other protagonists, outside of him actually confessing his feelings right away. Our female lead has a bit more going for her, but nothing that’s expanded upon. She’s the only child of a wealthy, powerful family in her country. However, due to the sexism of said country, only men can have certain positions of power, so her family stands to lose everything. As such, she pushes herself constantly to outdo any man in strength, wisdom, and more so she can change the rules and prove she is worthy of the title of Earl. It’s a solid backstory and I like that her interest in Romio comes from him offering to help her out in her goals. The first volume really doesn’t explore any of that outside of the first chapter, however, focusing mostly on things from Romio’s point of view as he tries to make their relationship grow. It’s rather disappointing in that way, since I think Juliet has a solid backstory. Thankfully, the pair’s chemistry is sweet and believable, and they play off each other well. So individually they are lacking, but together they make for a fun couple in this romantic comedy.

The supporting cast is okay at this point; they’re mostly just introduced to show their dynamics with each of the main characters. We have Hatsuki Koami, a childhood friend of Romio who has a crush on him. She’s the most level-headed of the cast but is always looking for a fight with Persia’s dorm, and she’s constantly trying to cozy up to Romio, who always blows her off. We have Scott, a hopeless suitor of Persia who’s always trying to be at her side or impress her. However, he’s always beaten down and batted away by life without a second thought. Neither are deep, but they do provide some great laughs. Lastly is Chartreux Westia, a snobby princess with a strong friendship with Juliet. She’s a royal pain who looks down on almost everyone and acts as a bit of an antagonist for Romio towards the end of the book. She’s not particularly funny, though she has an interesting secret that gives her a bit more character and that I hope is explored more.

The comedy in the book is rather good overall. Almost everything clicks with me. There are some great physical gags, like Romio using his Iron Claw move on Juliet, that constantly break up sweet tender moments. While not littered with them, the art does depict some amusing visual gags that sound like they wouldn’t work on paper but that are executed pretty well. For instance, as dumb as it was, I laughed at a couple of masked guys suffocating on their own masks while Juliet just stared in disbelief. The dialogue has some great bits of banter and the overall timing on most things works well, especially in the climax of the first chapter. Not every joke lands admittedly, but I feel that this is one of the better romantic comedies I’ve read in quite a while.

The artwork for the series is serviceable. Nothing about it is wrong by any means. The layout work and the panel flow are all well-done. Characters are distinct from one another and never look off-model with poor foreshortening or anything like that. The comedy is very well-executed overall, bringing to life some great gags and silly bits with fun, exaggerated moments or jokes that are paced well. However, nothing about the art style makes it really stand out in the crowd. It seems very much like a hodgepodge of styles of, again, Nisekoi and Yamada-kun, in its character designs and layouts. With that said, the art’s weakest point is its attempts at fan service. Due to the series rarely using it, the times when it does feel out of place or like the creator was mandated to include it. I wouldn’t say all of this makes this is a bad looking book, just one that may not jump out at you if you were to just flip through it.

Boarding School Juliet Vol. 1 is a fine romantic comedy. The chemistry between the two main characters is excellent and the humor is great most of the time, backed up by a fun enough supporting cast and a different twist on the genre. But what hurts it the most is that there’s not much substance to its characters or backstory, despite having a ton here established. It’s not a deal-breaker by any means, but it feels so odd that some of the most intriguing parts are kind of shoved off into a closet for later. Still, if you’re looking for a good comedy manga to try, I would definitely give this a recommendation.

Boarding School Juliet Vol. 1 Review
Is it good?
Boarding School Juliet Vol. 1 is a fine romantic comedy. The chemistry between the two main characters is excellent and the humor is great most of the time. What hurts it the most is that there's not much substance to its characters or backstory.
The story premise and twist makes the plot feel fresh
The couple are really sweet and enjoyable
This volume is really funny a lot of the time
The artwork works well for the story
The main characters really could use more characterization
The backstory and cast feel VERY underdeveloped
7.5
Good