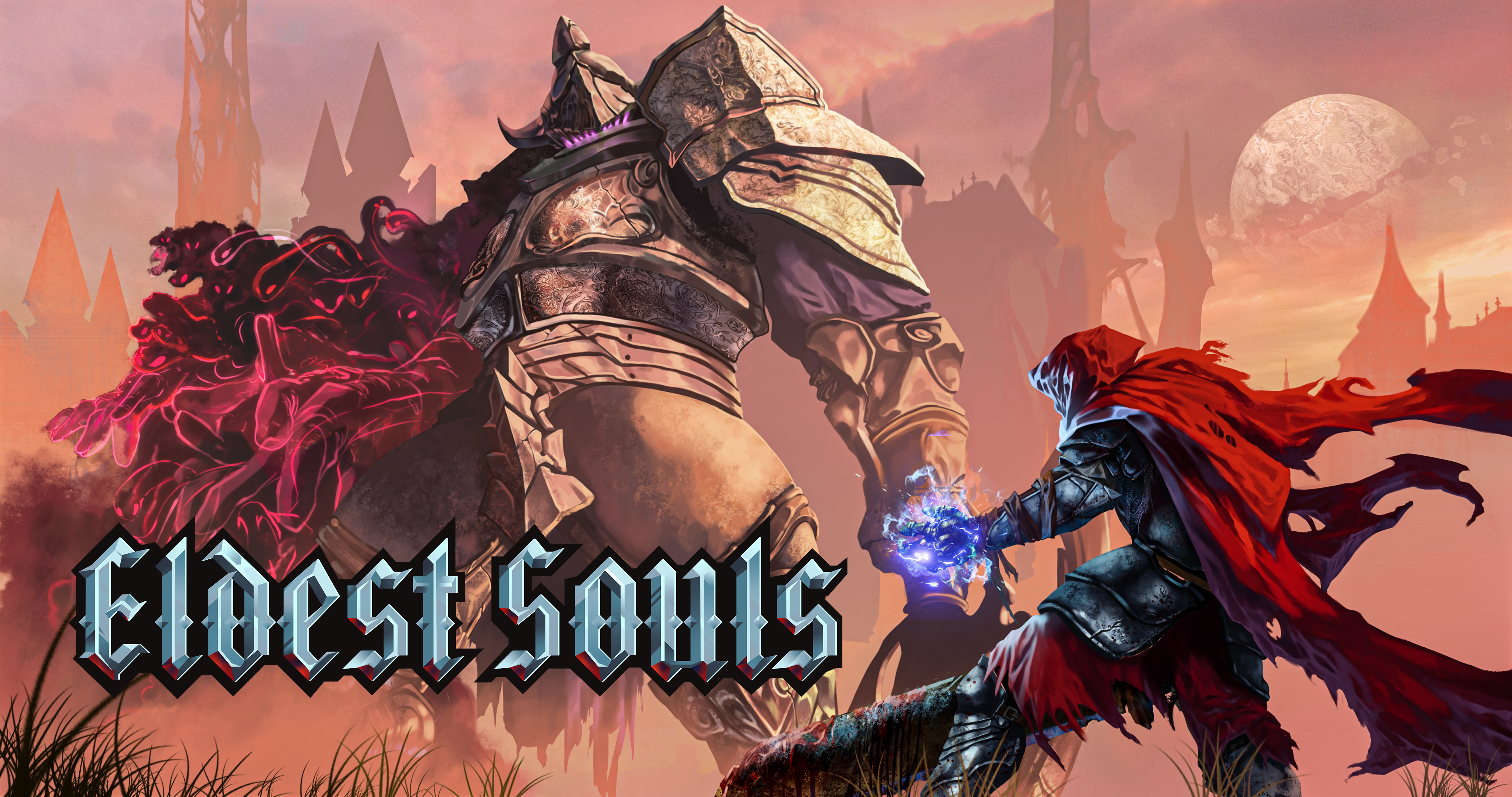 There was a point in Eldest Souls when I didn’t think I’d be able to write this review. I had been trying for hours against the first non-tutorial boss and had died an embarrassing 100 times (the game so kindly keeps a count of your deaths). I’m a veteran of Dark Souls. One of my favorite games ever is Bloodborne. I’ve died way more than twice in Sekiro: Shadows Die Twice. I love difficult games that challenge players and have dumped countless hours into them. Yet, I was struggling so hard with Eldest Souls.

And I loved every minute of it.

Once I slayed The Guardian, the game began to open up and I was able to really experience it for all its glory. I died plenty more times (thankfully not 100 times to a single boss again) and after each death exclaimed, “Oh! So close!” because the game never discouraged me to the point of not wanting to play it anymore. I learned something after each death — the boss’s moves, what was and wasn’t working for my build, the right timing for dashing. I quickly became addicted.

Indie developer Fallen Flag Studio‘s Eldest Souls is a soulslike, 16-bit, boss-rush action game. There aren’t any levels populated with enemies, deathly swamps (thank the Old Gods), or shortcuts back to a checkpoint, like what you’d expect from a From Software game. Instead, Eldest Souls has 10 boss fights ranging from very difficult to holy sh*t when will this torture end. It’s awesome.

Azikel, God of Light, was a standout boss for me.

What I really enjoyed about the boss fights was how different they all were. Some bosses were nimble and quick, like your player character, while others were large and dealt heavy damage. Because of this, each fight begets experimentation. I’d respec my skill points after every dozen or so deaths as I learned a boss’s moves more. I found Aryana, First of the Moon, easy (that being a relative term) to land attacks on, so I made sure my build dealt as much damage as possible, while against Hyem, of the frigid waste, and Eos, God of Unity, I needed to be quick on my feet and went for builds that buffed my speed.

You have a couple basic combat moves to start with, light attacks and charge attacks. Charging your opponent is the real bread and butter of Eldest Souls as once a charge attack lands you gain a bloodthirst buff that increases your damage, ups your movement speed, and lets you heal yourself by landing hits (think of Bloodborne’s rally mechanic). When the bloodthirst buff is full or nearly full, it can be expended with a bloodburst attack, which deals heavy damage.

There are three different fighting styles you can choose from and dump your skill points into, with one focused more on movement and dealing small amounts of damage in rapid succession, one focused on hitting heavily, and another built around defense and countering your opponent’s attacks. At the outset of the game I thought the gameplay would get tiring after a while with only one weapon available, but because of the different playstyles available, I never found myself feeling bored — even after death 300 or so. There are enough attacks and skills available in the game that it never becomes repetitive and instead stays exhilarating throughout your lone warrior’s journey.

Once a boss is defeated, your character acquires a boss shard, adding another layer to the combat system. Each boss shard has a different ability depending on where it’s slotted. For example, The Guardian’s shard can greatly increase the damage of a berserk slash, add corruption that heals to the windslide attack, or gives you a grapple attack when in the active slot, among other abilities. With all the different shards in the game, their different abilities, and the many places to slot them, no two player builds will be alike. I really enjoyed this system in Eldest Souls. It was a sharp contrast to how I play a From Software game, where I find a weapon or two I love and stick with them for the majority of the game (Bloodborne’s Blades of Mercy will always be a personal fave).

I do wish there was more of an extensive training area. You come across a camp with a couple practice dummies — one you can whail on until your thumbs are sore and the other you can practice dashing against — but this area only becomes available after the third real boss is defeated. Because Eldest Souls only has boss fights, there are no skeletons, rats, or other classic RPG enemies to learn your moves and timing against. I would have loved a separate training ground with a live enemy to engage in combat with, similar to Hanbei from Sekiro, so I didn’t have to learn the game via a trial by intense boss fight.

Just because Eldest Souls is all boss fights doesn’t mean it’s a short game. With how many times you’ll be dying, Eldest Souls can easily be a ten-hour experience, especially if you take the time to traverse the different areas in the game looking for items. There are several NPCs to speak to, all with their own questlines. I won’t spoil too much, but I’d recommend taking your time talking to everyone instead of rushing from boss to boss — it might pay off down the line.

Once all the bosses are defeated and the game is completed, New Game+ opens up with enemies increasing in difficulty. There’s also the Arena Mode where players can take on bosses and experiment with different builds outside of the main game. Essentially, Eldest Souls possesses more than enough content to justify its slim $20 price tag.

I absolutely love the gorgeous and, at times, haunting art design.

The art design in Eldest Souls is stupendous. The environments are beautifully constructed with 16-bit pixel art. There’s a nice variety to them too, from the foreboding castle exteriors to a lush garden area. But the look of the bosses is what really stuck out to me. I loved the creature deigns, with the regal and bright aesthetic of Azikel, God of Light, being a personal favorite. Aryana, First of the Moon, was another standout. I found her platform with the statue-esque spearmen and archers to be simply wonderful.

I could touch a bit upon the game’s story, but, like From Software’s work, its story is sparse and told mostly through item descriptions, cryptic NPC dialogue, and letters and other scribblings found around the environments. You play as a lone warrior venturing to the Citadel to kill some Old Gods with an obsidian blade for…reasons? There’s an opening cutscene that sets the stage, but a few deaths in I had already forgotten most of what it had said. I don’t think the lack of a clear-cut narrative is explicitly a problem, but I know this storytelling style isn’t for everyone.

Overall, I’ve very much enjoyed my time with Eldest Souls, even with most of that time being spent getting my ass handed to me on an obsidian platter. It’s a strong and noteworthy addition to the soulslike genre. The pixel art graphics are beautiful, the gameplay is deep enough to never get boring, and the bosses are original and well designed. They may feel unbeatable at times, but if we’re not playing for that rush of excitement after having conquered a seemingly insurmountable challenge, then what are we playing for?

‘Eldest Souls’ review: a glorious and punishing experience
Eldest Souls
Prepare to die a few hundred times -- and have a hell of a time doing it.
Reader Rating0 Votes
0
Fun and addictive gameplay.
Depth of skill customization encourages replayability.
The game has a gorgeous aesthetic.
Extreme difficulty can be frustrating at times and will push some players away.
8.5

In this article:dark souls, eldest souls
Up Next:

Check out the launch trailer for Mortal Shell: The Virtuous Cycle